It’s Mobile World Congress time again, the time of year when most of the smartphone surprises for the year are either teased or confirmed. Sony’s had a couple of announcements for us in the shape of the Xperia XZ2 and XZ2 Compact handsets, which will be launching next month — though local availability and pricing have yet to be confirmed.

It’s been quite some time since a new device has appeared in Sony’s premium range, with the company opting instead to focus on their mid-range smartphones for a while. The gap between the Xperia XZ’s October 2016 launch and now seems to have been long enough as Sony has made the sequel official. There are two handsets coming, the Xperia XZ2 and the XZ2 compact, and they are mainly differentiated by the display size. The Xperia XZ2 will pack a 5.7in display while the Compact will have a 5in screen. Once upon a time ‘compact’ meant 4in or so but okay, we’ll go with it. Both handsets will be packing Qualcomm’s Snapdragon 845 processors, part of a partnership between Sony and the chip-maker that should see 5G network connectivity launching earlier than expected (some time in 2019, apparently). 64GB of storage and 4GB of RAM will be consistent across the range as well but so far it’s business as usual for a flagship. You know, the same top-end specs that everyone else has.

Sony’s hoping to impress with their camera tech, a position that the company has also had solid footing in. Both phones are going to be packing Sony’s Motion Eye camera tech, which will allow for so-called 4K movie recording with HDR — in case you want to give Netflix a run for its money using your YouTube channel. Super slow-mo sticks around with a frame-rate of up to 960 frames per second possible. Sony’s upped the resolution for this to HD, however. No more 720p for our home-brewed GIFs, right? Sony’s using a 19MP f/2.0 sensor for their pair this year.

Sony’s display incorporates HDR right off the bat, meaning that you’ll be able to view how your camera sensor works on-screen. Plus you’ll be able to view HDR content from Netflix and Amazon. There’s a little animated something going on with the company’s 3D Creator feature — which will let users create 3D scans of items using the front or rear camera, including the user’s face if that’s their thing. 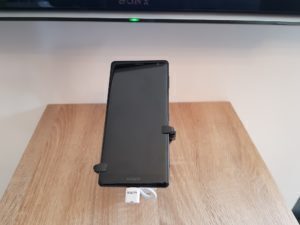 Concerning hands-ons, we got some time to fiddle with a production blank showing only the handset’s outer shell here in South Africa. It couldn’t be powered on at all but we did get a feel for the device and the Xperia XZ2 is a weighty (compared to the Samsung Galaxy S8) but sleek device that marks an evolution for Sony’s smartphones. There are more curves this time around, for one, but Sony has also gone and dropped the headphone jack, from what we can see. The bezels are a little slimmer and Samsung’s influence is apparent here.

Stuff’s Craig Wilson is in Barcelona at the moment and will be getting some proper hands-on time with all the devices he can get his hands on, including a look at Sony’s newest pair. We’ll update with his impressions once he’s finished playing around.