The last time we saw the perpetually angry Spartan Kratos he had slain (most of) the Greek pantheon and was mortally wounded — though he still managed to wander off, so perhaps “mortally” wounded is more appropriate. After that it was back in time for subsequent releases, but the main God of War story is back, and slated for a 20 April 2018 release.

Kratos has left his home and forged a new life in a Nordic setting, a life that requires a beard, an axe and a lot of time in the woods. In short he’s become a father (again), something that the newly-released God of War story trailer (above) has confirmed. The youngster running around with Kratos is his son by blood, and that means the kid has the blood of a god running through his veins. Normally fatherhood isn’t quite this complicated.

The story trailer also shows a side to Kratos that we haven’t seen a whole lot of: Losing his family tipped the Spartan into the abyss in the first place and building a new family seems to have done some good for him. What we weren’t expecting was quite the amount of feels present in the story — God of War is typically about ripping something mythical’s head off and beating something else to death with it. While there’s certainly going to be plenty of that it’s only hinted at here. Here we have… emotion?

Actually we can’t wait to see what kind of man Kratos has grown into when his new look, new weapon, and new son take centre stage on the PlayStation 4 on 20 April. Gaming’s rage-driven demigod dealing with the feeling surrounding his love for his son? Wait, God of War isn’t going to make us cry, is it? Surely not… 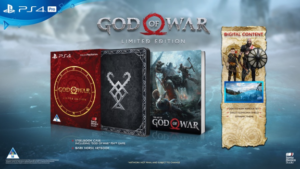 If the story doesn’t do it, the special editions of the game might. When it lands God of War is going to set locals back R1,000 for the standard edition, with a Limited and Collector’s Edition also in the offing. The Limited Edition will cost R1,100 and include a Steelbook case, artbook, and some digital bits like an armour set, shield skin, and a PS4 theme. The Collector’s Edition includes the digital content and Steelbook, adding a cloth map and a 9in statue into the mix, as well as a few more extras. That’ll set you back R2,000 come launch day.