It’s never been easier to experience virtual reality, with the latest headsets not even forcing you to faff with your phone before diving into all manner of digital worlds.

So shouldn’t it be getting easier to create VR content, too? Google and Lenovo think so, and the Mirage Camera could be the piece of tech to do it. The point-and-shoot camera made its debut at CES, and we made sure to try it out to see if we’ll soon be shooting our holiday snaps in a VR-friendly format.

HOW MUCH VR IS TOO MUCH VR? 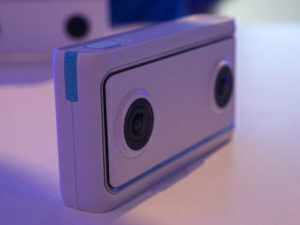 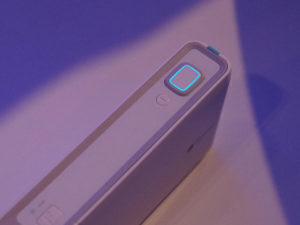 First off, a disclaimer: this isn’t the kind of VR that completely envelops you in an experience. Instead of 360-degree clips and photos, the Mirage Camera captures a 180-degree, stereoscopic view of what’s in front of you – not behind.

Lenovo and Google say that’s because people tend to focus on what they can see, not what’s behind them. A 180-degree view lets you take in the whole scene, while cutting out the boring bits like the person behind the camera pressing the shutter button.

This also means the sensors aren’t working overtime to capture an entire scene, only a part of it. As a result, the Mirage captures and impressive amount of detail in each photo or clip. Certain scenes give a better impression of depth, but the demo clips we saw had excellent clarity.

Actually taking photos should be quick, with no video preview to render on the device itself. Just point, shoot and save.

SMILE FOR THE CAMERA The Mirage uses two 13MP sensors with 180-degree fisheye lenses, which are good for stereoscopic stills that give the impression of depth once you’ve pulled on a pair of VR goggles, or 4K video at 30fps.

Aside from the funky dual lenses, the camera looks deceptively simple, with no viewfinder and barely any buttons. You get a power button, shutter button, and a function key that flips between stills, video and live streaming to YouTube if you’re hooked in to a Wi-Fi network. Lenovo is working on a version with built-in 4G, too, for go-anywhere sharing.

There’s a 1/4in tripod thread at the bottom, so you can set it up and get in the shot yourself, with iOS and Android smart controls letting you shoot remotely. These apps also let you view back your footage on the small screen, before you pop on a VR headset.

You can save files locally on 16GB of on-board storage, or to a microSD card. USB-C charging is a welcome 2018 addition, and the battery should be good for two hours of shooting between top-ups.

Upload directly to Google Photos or YouTube, and it’ll automatically adjust the image if you’re viewing on a traditional screen, rather than in VR. Most video editing software should support Google’s VR180 file format if you upload to a PC, too, so you can get more creative with your clips. Are you really missing out if your VR photos only capture half of your surroundings? Lenovo and Google say no, but the Mirage Camera will be the bit of kit to actually test the theory.

It seems simple enough to use, and image quality does seem to be very good, even at this early, non-final hardware stage. Lenovo hasn’t quite worked out a price yet, only saying it’ll set you back “less than $300” when it arrives this year but you’ll also need to factor in the VR headset you’ll be watching your footage back on.

Considering you can already pick up plenty of full 360-degree cameras for a similar amount, whether the Mirage is a must-buy or not will depend on Google’s Daydream VR initiative ramping up to cover a lot more phones and devices.

We’ll know if it has done enough later in the year, when we give the Mirage Camera a full review.