The first thing you notice about the OnePlus 5 is that it boasts great quality finishes and hardware for a pretty good price. Although the OnePlus 5 is the most expensive device in their range so far (and even more costly when bought here in South Africa), it’s still cheaper than the top competitors in the race. It is, however, definitely not running in last place when it comes to performance.

It has a sleek design, a 5.5 inch 1080p full HD AMOLED screen with large bezels at the top and bottom of the screen (not following the current bezel-less trend, we see) and a touch-sensitive home button at the bottom. The massive change OnePlus has made is their impressive dual camera at the back, which includes a standard 16MP lens and a 20MP telephoto lens with features like portrait mode and 4K video.

At first glance the OnePlus 5 looks rather boring… it has a very basic layout with anodised aluminium on the back. The home ‘button’ on the front doubles as a fingerprint scanner and is touch-only, an interesting move away from the concrete button feature many flagship phones have. Or had, rather. Buttons are on the way out. The screen is bright and reinforced with Gorilla Glass 5, and most apps run smoothly without any hiccups. The battery life is also impressive: this phone just won’t die. 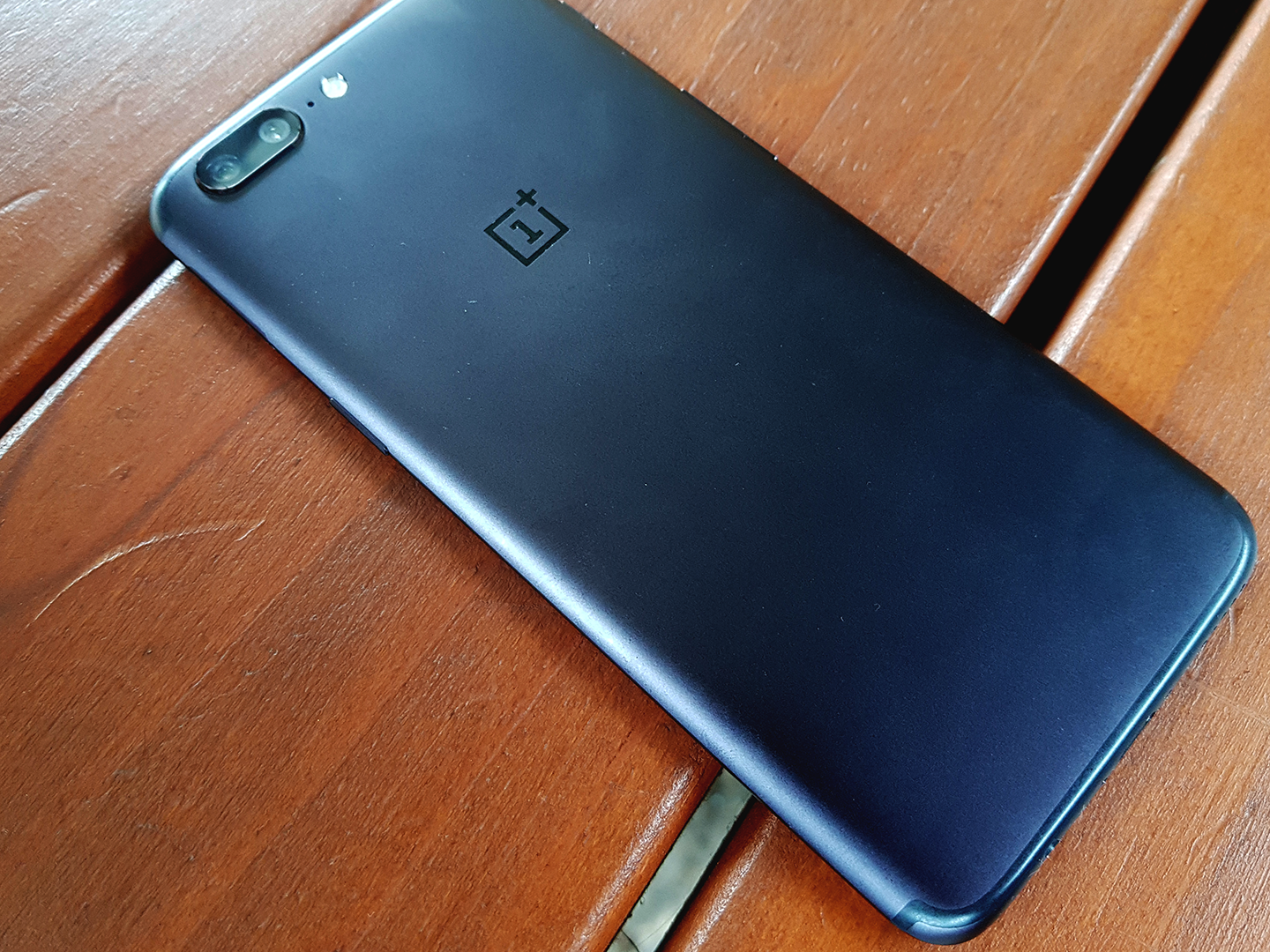 When it comes to design, the OnePlus 5 got the short straw. If you happen to put your OnePlus on the table at the party among other smartphones, it might just disappear. The design is minimal and sleek, and it feels like a solid phone when gripped in the hand. If you want to make a statement with this phone, you can get a cover for it because they are only available in Midnight Black, Slate Grey (more like light black).

The large bezels around the screen might be a deal-breaker for the no-bezel fans, but it does not take away from the amazing usability. The bottom bezel have two touch-sensitive buttons on either side of the home ‘button’ (which is actually just touch-sensitive). These can be manually programmed to be one of two options: back and recent pages. The home button doesn’t click; it’s a fingerprint-reading (which is amazing) touch-sensitive panel that responds to very light pressure. If you are used to an actual home button this might take some getting used to, but it’s very useful and also programmable.

The OnePlus 5 runs OxygenOS, OnePlus’s minimal skin on Android 7.1.1, and it feels a lot like stock Android. On start-up it looks like the Pixel, but you really notice a difference when you start playing around with customisation. Okay, so this device may only come in black (basically) but you can extensively customise on-screen and off-screen buttons as well as menu preferences and light settings. That’s something, right?

On the left-hand side of the device, you will find the unique Alert Slider. This three-step switch will, with one slide up, activate Do Not Disturb, with the middle silencing your device and the bottom will pop your ringer back on. It’s a nice approach, and you can are able to change the individual notification settings of these three actions from the Alert Slider section in the Settings.

When you swipe right from the main screen in OxygenOS you won’t be greeted by trusty old Google, but rather an array of widgets – weather, recent apps, contacts and the “Manage Centre”, giving you quick readouts on available storage, data used and battery. You can, of course, add more widgets here if you wish. Okay, not literally. But the OnePlus has a very impressive battery life from the get-go. We started playing with the device at 9:00 in the morning and by 14:00 it was still on 66% and could have still lasted another day. Plus 12 additional hours. This was with 24 battery-draining apps actively running in the background.

It has a 3,300mAh battery in the back which can last for two days. We have noticed that with normal usage the battery does last, easily making it to sleep-time charging. Battery life is probably one of the most important considerations to a lot of smartphone users, and OnePlus has made sure they do not disappoint on this front.

It seems that the OnePlus 5 is not fazed by battery-draining apps like games and the Google-based apps. It proved a challenge to drain this device’s battery.

High-speed Dash Charging makes a big difference and you probably don’t need to have it connected to the cable through the night. A quick charge will certainly give you enough battery power to last that little extra when you need it. This battery could get you out of a pickle when you’re on 20% but still have a long journey home. It also keeps remarkably cool when fast-charging.

Camera & Video: Make it a double Here they have gone the double rear-camera route and it is a great upgrade from the previous model. The OnePlus range has struggled in this department and it’s safe to say that they have hit the nail on the head with this one. The camera is up there with other dual-camera devices like the iPhone 7 Plus and the Samsung Galaxy S8. Up there but not quite on top.

The company claims that this camera is the best thing since the DSLR and that you will never need another pro photography tool in your arsenal if you have this device. We would not say this is completely true, but good on them. We like confidence.

The camera specs really are impressive, though. The first rear lens is a 20MP telephoto lens that puts the  OnePlus 5 in the same bracket as the iPhone 7 Plus when paired with the more conventional 16MP lens. One of the distinguishing camera features is bokeh – or Depth Effect as both Apple and OnePlus would like us to call it. This makes use of both rear lenses to create a blurred effect in the background to create a more ‘professional’ look. The dual cameras here also promise lossless zoom abilities and it could definitely hold its own against other flagship devices.

Another feature is the Portrait Mode. On the OnePlus 5 this works in exactly the same way as the iPhone 7 Plus. The quality is also pretty on point and it’s easy to say that this phone camera is a real contender with other top-of-the-range devices.

The other feature that we get from going double is lossless zoom. The OnePlus 5 can zoom to 2x in a press of a button without any loss of quality. If you slide the on-screen button, you can utilise digital zoom up to 8x magnification.

A feature that might intrigue (or bother) smartphone photographers is the addition of Pro Mode. When the camera is set to pro mode you gain access to a whole range of DSLR settings and options. Here you will be able to adjust the ISO, white balance, shutter speed, focus and exposure in real-time. You even get a histogram floating top-right so you can finely tune exposure if that’s your thing.

OnePlus have even included an on-screen Reference Line to help you capture perfectly straight images. It uses the device’s gyroscope, and gives you a horizontal horizon line which is perfect for shooting landscapes and spending less time in Photoshop correcting perspective. You are able to save personal presets in pro mode while also having the ability to shoot in RAW.

If going pro is not your choice, don’t stress. The f/1.7 aperture camera does a great job capturing high-quality images without it. The colours are vivid, yet natural and not over-saturated, and images are generally exposed well.

The front has a 16MP front camera with auto HDR mode and a screen-based flash for low-light conditions which is very neat.

And then there’s video. By default video shoots at 1080p at 60fps. But you could shoot in 4K (as well as 720p to conserve storage space). Although the device’s screen does not support 4K, you will be able to upload the video to a 4K-ready screen and bask in all its glory. There are also time-lapse and slow-motion modes. Performance-wise, the OnePlus 5 is fast. The powerful Snapdragon 835 CPU definitely puts out enough power to keep the device running smoothly. Combined that with the Adreno 540 GPU and it’s quicker than you would expect from the device. Apps launch in an instant and so far we haven’t experienced any slowdown, even with pretty much all of the apps open, thanks to the 8GB RAM. Yes, 8GB of RAM. More than your average notebook.

Unfortunately the OnePlus 5 does not have expandable memory, and the internal memory will keep you stuck with 128GB storage on the 8GB RAM version of the device and 64GB on the 6GB RAM model. Yes, there is no SD card slot. It would have been nice to see one but 128GB should be enough unless you’re constantly shooting 4K video. The OnePlus 5 has space for two SIMs as most Chinese phones typically do. There really isn’t much to fault on the OnePlus 5 when you consider the price. There aren’t many devices with elements comparable to the iPhone 7 Plus at this price point.

The OnePlus 5 may not boast amazing top-of-the-range features, or anything very special in general, but everything about this device feels like high-quality stuff. Most any tech-snob would agree if they spent a few hours on this long-lasting device.

Do you know someone whose phone is continually dead and you are never able to get a hold of them? This is the perfect phone for that person. This is an essential companion for someone who needs a phone with a trusty battery on a tight budget. We were pleasantly surprised with the performance quality and are excited to see what OnePlus still have up their sleeves.