Way back in 2011, Skyrim absolutely blew us away.

A lot can happen in six years, though. This was before RPG greats like The Witcher 3 and Zelda: Breath of the Wild rolled around – so will a few coats of digital paint and a version you can carry around with you in your pocket be enough to keep Bethesda in our good books?

Yes, as it turns out. It absolutely will. In case you didn’t pump a hundred hours into it the first time around, a little history lesson is in order.

Skyrim takes place 200 years after the events of the previous game, Oblivion (which we still think has the cooler name, by the way), and sets you loose into the cold northern territories of Tamriel as an unknown wanderer.

This frosty, fantasy landscape is in the grip of civil war, but just as you begin to think this is a game about siding with either the rebels or the Empire, along come the dragons. That’s right; having been dormant for generations the massive winged beasties are back to blight the people of Skyrim.

As luck would have it, though, you are Dragonborn – a warrior capable of absorbing the power of slain dragons and utilizing it in the form of powerful attacks called ‘shouts’.

QUESTING FOR THE WIN 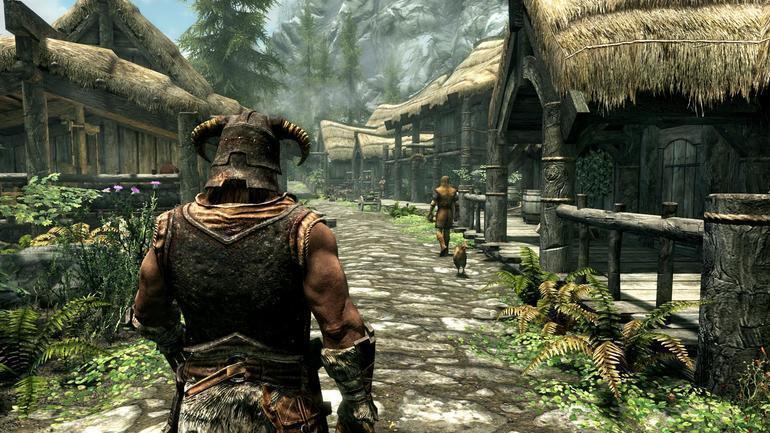 So on one hand you’ve got the ongoing civil war to contend with, and on the other you’ve got dragons to slay.

All in a day’s work for a roaming adventurer, really, and you’re free to go about it however you like, with hand-to-hand combat to master, spells to learn and sneaking skills to perfect.

Then you’ve got an overflowing journal of side-quests to chew through, like killing ten bears just because one particularly grumpy innkeeper has a vendetta against the savage furballs.

Still, even these often-odd little errands generally serve a purpose – either taking you to a previously undiscovered and interesting area, or threading in with the main quest.

Essentially, almost whatever you do in Skyrim has the feeling of contributing towards your ultimate goal, even if for a long while you’re not entirely sure what that goal is. Simply wandering across the landscape is a pleasure in itself, though.

There’s more variety here than in any of the other Elder Scrolls games, with snowy mountains giving way to flat farmland and meandering rivers, and the scale is simply epic.

Zelda: Breath of the Wild might be bigger, and The Witcher 3 even bigger still, but even six years on from launch, Skyrim still feels like somewhere you could happily get lost in.

Journeys between locations feel epic, too, especially the winding climb up the 7000 steps to the summit of the Throat of the World, Skyrim’s highest peak.

The Special Edition (on the other consoles) adds some even prettier weather, lighting and night skies to really drop your jaw, too. Naturally you’ll find yourself trawling through all manner of caves, castles and dungeons, too. These are suitably cautious, creepy affairs, as you scan for deadly traps while worrying and wondering where that scuttling sound is coming from.

When you find out, you’ll be pleased to discover a combat system that’s far more robust and rewarding than previous Elder Scrolls games. Magic attacks have palpable power, melee weapons are weighty and savage, and bows are satisfyingly accurate and damaging.

The dual-wielding system lets you can fire off lightning bolts with your left hand while smashing heads with a mace in your right, too.

A lot of enemies can be felled with brute strength and constant aggression, but the smarter ones (and magic users) will quickly sap your health bar if you get up in their grille. You’ve got to plan your attacks carefully – or just be ready to guzzle a load of health potions mid-fight. The fact you can now play Skyrim anywhere on the Nintendo Switch is, quite frankly, amazing.

OK, so it’s not quite so graphically stunning as the PC, PS4 and Xbox One Special Edition versions, but it still looks impressively crisp and defined. There’s no motion blur hiding low resolution textures here, like there is on Doom, Bethesda’s other Switch game, but there is some noticeable pop-in when you’re meandering across the landscape.

Some Special Edition features have carried across, though, including better weather and lighting effects than the 2011 original game, and it’s difficult to complain when the framerate is rock solid. It simply looks fantastic on the Switch screen, even if object edges are big jaggier than you’ll see on other consoles.

The various control schemes work brilliantly too, although the Joy-Con motion controls still feel a bit gimmicky. Luckily you can turn ‘em off.

Oh, and you can hook up your Amibo to get some sweet Legend of Zelda gear for your Dragonborn. What’s not to like about that? It was the pinnacle of role playing games when it launched, and while that might not be the case any more, Skyrim is still up there with the best of ‘em.

Sure, there’s still the odd glitch, even after six years of patches and updates, but a game of this magnitude was always going to have a few. Skyrim is actually far more solid now than veteran RPGers might expect.

Any little bugs will be forgotten in the face of the game’s overwhelming qualities, especially for Nintendo players who have never experienced The Elder Scrolls before. The Switch edition may not be the best looking version of Skyrim, but it’s easily the most accessible.

It’s not a must-buy if you’ve explored every inch of Tamriel already, but even if you have, bringing the Dragonborn with you on the move might be enough to justify doing it all over again.