Need for Speed already had a lot in common with the Fast and Furious films.

They’re both long-running franchises obsessed with driving fast, crazy customisation and OTT action – but this latest entry gets closer than ever to matching the car-based carnage of Dom Toretto and crew.

Payback is a story-driven revenge tale, putting your ragtag team of drivers up against the underground gambling cartel that’s been rigging the local racing scene.

As anyone that has ever stepped foot in a casino before will tell you, though, it’s never a good idea to bet against the house – it usually wins. What wanton act of villainy kicks off this quest for retribution? Nothing major, it seems.

After being double-crossed by one of your crew-mates and having your fancy-pants Koenigsegg stolen out from under your nose, your team disbands and basically does odd jobs for a few months. Eventually the leader gets sick of being a valet to the rich and famous, and gets the gang back together for some old-fashioned revenge.

It’s not like anyone dies, gets arrested, or put in the hospital – but apparently that’s enough to risk life and limb in all manner of insane set-pieces.

At least your target, “The House”, is shady enough to deserve taking down. It’s out to control all the gambling in the city, racing included, and if that includes stealing a few cars, or blowing up a few houses, then so be it.

Cue lots of climbing up the ranks of different race disciplines, in order to earn the recognition that gets you onto the radar of the city’s big players – interspersed with chaotic story missions ripped straight from the silver screen.

SHUT UP AND DRIVE It’s not like these plot-driven diversions endear you to the three main characters, either.

Racer Tyler, drift star Mac and getaway driver Jess are all generic creations, spouting irritating sound bites whenever you overtake an opponent, land a big jump, or the sun goes down at night (yes, really).

They talk a lot more during big set pieces, with some seriously corny dialogue that actually made us wince when we heard it. Annoyingly, the best bits of each mission (like pulling up alongside a moving truck with an accomplice hanging out of the window) are taken over by cut-scenes, leaving you to watch rather than pull off the exciting moves yourself. Beyond the big story missions, the more familiar racing is decent enough. The Need For Speed series has always has wild, arcade-style handling, with dramatic oversteer and cars that are super-eager to drift around every corner, and Payback is no different.

Every car starts with a basic tank of nitrous under the bonnet, letting you boost for an extra burst of speed when you’re lagging behind. It constantly refills, too, so you can make liberal use of it in each race.

You essentially have to use it, too, because of the aggressive AI rubber-banding. In some races we would do everything perfectly and still come up short by the end, only to retry and absolutely smoke the rest of the field – with a worse time to boot.

Giving your car some much-need upgrades isn’t as simple as rolling into the shop, though – and it’s here that Payback shows its true colours. Rather than buy specific bolt-ons, you have to improve your cars with Speed Cards – random awards that determine top speed, braking power, and handling.

You win one after coming first in an event, or buy ‘em from the constantly rotating stock found in tune-up shops. Here, each one costs the amount you’d earn from a handful of race wins.

Applying them to your car improves its overall score. This score indicates your odds of winning a particular event, but seeing how that figure gets higher with each new race, you’re going to need a lot of cards. And that takes ages.

Completing a race series adds new stock to the dealerships dotted across the city, but five hours in and we were still driving the Honda S2000 we’d picked at the start of the game. We could have bought something different, but wouldn’t be able to afford the speed cards we’d need to make the new car competitive.

Speed Cards earned in one race discipline can’t be transferred to another, so winning off-road races won’t help your drift car get any better, and there’s no guarantee the ones you win will actually be of any use to you – we won four ECU upgrades in a row, none of which were actually better than the one already bolted to the car.

You can trade these junk cards in, with three unlocking one spin of a slot machine – again awarding you a random part.

Instead of buying new, you can also explore Fortune Valley, the Las Vegas-inspired open world desert location, to uncover derelict cars. Finding all the parts lets you restore these wrecks to their former glory, but even then each one is seriously lacking in power until you slap a load of speed cards down.

Payback, like almost every other EA game, is obsessed with loot crates, drip-feeding you bonuses for logging in each day – but unless you’ve got deep pockets, the Premium boxes that help keep your bank balance in the black are permanently out of reach. That’s a real shame, because it stops you from enjoying what made Need for Speed such a success in the first place.

There’s a huge selection of cars, but you won’t be able to buy ‘em all. Every one can be modified and customised with body kits, spoilers, wheels and under-floor neon lights, but that all eats into your meagre cash reserves.

It wouldn’t be so bad if you could use every car in every discipline, but certain rides are reserved for drifting, drag racing, or off-road. Once you’ve dedicated a car to one particular task, it can’t be switched to another. Ubisoft’s The Crew did this far better, giving you a shared garage of cars that could be adapted to suit any discipline. 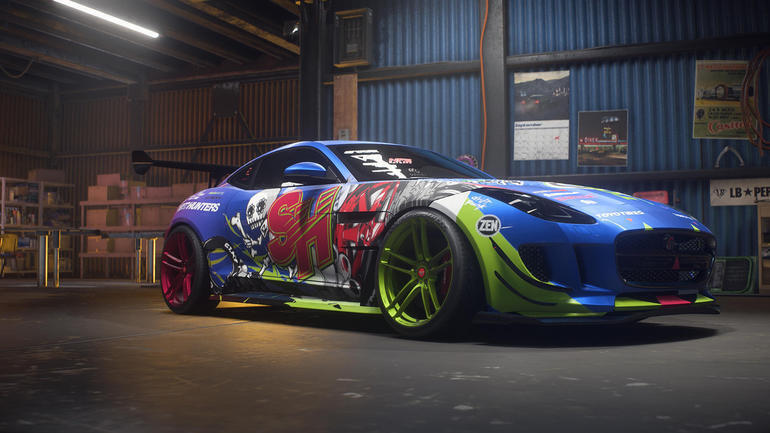 Payback has a few good ideas, but it falls short in the execution.

The movie-worthy story would be exciting, if it didn’t constantly wrestle control away from you in favour of non-interactive cut scenes. The expansive garage would be great fun, if you could actually afford to own everything on offer, and the sizeable open world would be enjoyable to explore if it wasn’t so empty of life.

The uncompromising focus on loot crates and randomly awarded stats upgrades sap away a lot of the fun, slowing down your progress when you should be building up a garage of lust-worthy supercars and custom creations.

It’s a bit like the blinged-out cars the series is so famous for: look beyond the bonkers body kit and exhaust so big you could fit your head inside it, and you’re still just driving the same mk1 VW Golf as your grandfather.