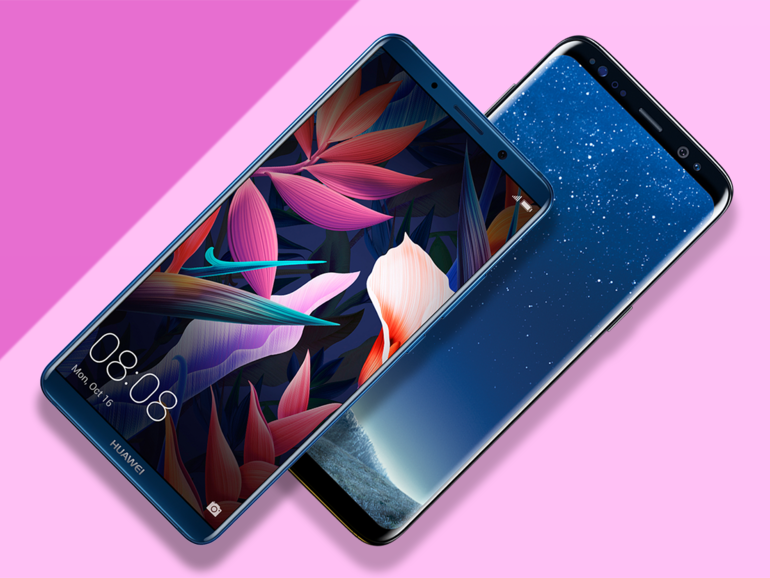 Nobody is making stylish, high-end phones quite like Samsung right now, although Apple’s iPhone X and Google’s Pixel 2 XL are trying mightily to take the crown away from the Galaxy S8 and Galaxy S8 Plus.

Now that we’ve seen the Mate 10 Pro at last, here’s how this battle shakes out.

Like the Galaxy S8, Pixel 2 XL, and LG G6, the Mate 10 Pro has embraced a nearly all-screen face with less bezel all around. It’s a little flashier than the surprisingly straightforward Pixel 2 XL from the front, but not quite on the level of Samsung. And the tiny Huawei logo below the screen is a bit of an eyesore. Are we really still doing front-facing branding in 2017?

Meanwhile, the Mate 10 Pro goes for a 6in panel at a close 18:9 aspect ratio, also AMOLED, but there’s a key difference here: it’s only a 1080p panel at 2160×1080. That’s fine, certainly, but there’s a slight degradation in clarity compared to the pixel-packed Galaxy S8 Plus screen. It’s still a very nice display, but sharper really is better here.

With the Mate 10 Pro, Huawei stuck with the pairing of a 12-megapixel main sensor and 20MP monochrome sensor from the great P10 and even better P10 Plus, albeit now with f/1.6 aperture lenses for both.

That tweak lets in extra light and makes for much better low-light results, and only the LG V30 matches it on that front. It also has phase detection and laser autofocus, and everything seemed super speedy in our usage – thanks in part to an A.I. assist that recognises what you point at and adjusts accordingly to ensure the best possible shot. Snapping a picture of a dog, or maybe your dinner? The Mate 10 Pro can figure that out with its A.I. smarts.

As with the P10 models, the results can look a bit overly processed at times, but whether you like that or not is up to your own preference. By and large, though, it takes excellent photos.

Samsung also has one of the best smartphone snappers in the world right now with the Galaxy S8 Plus – but not the best. It’s a single 12MP shooter on the back with a f/1.7 aperture lens, optical image stabilisation, and dual-pixel autofocus, plus some crafty processing to help you snag brilliant shots.

Both phones turn out pretty fantastic shots most of the time, but neither stands tall as the absolute best on the market right now. We haven’t had a chance to get these phones into a proper shootout just yet, but for now, we’re calling it a draw – you’ll do well with either of these.

The Galaxy S8 Plus is already one of the speediest phones on the market, and the Mate 10 Pro is at least on the same level. And it might prove faster over time.

Samsung is using its own Exynos 8895 chip in many territories or the Qualcomm Snapdragon 835 in others (with 4GB RAM either way), and both are top-of-the-line in the Android world. Meanwhile, the Mate 10 Pro uses Huawei’s new Kirin 970 CPU that packs a punch over the previous version, with 6GB RAM to help speed things along.

The Mate 10 Pro also comes with a Neural Processing Unit (NPU) that helps automate some tasks, such as turning on the low-light mode and doing near-real-time language translation. It also uses machine learning to speed up processes the more you use the device, so it’s possible that the phone will feel faster over time instead of bogged down and slower.

Still, there’s no obvious difference in performance between these two: they’re two of the fastest Androids around.

What do you get when a phone has a lower-resolution screen and a larger battery cell inside? More battery life – and that could help nudge some folks towards the Mate 10 Pro over the Galaxy S8 Plus.

With a 1080p screen and 4,000mAh battery pack, the Mate 10 Pro squeeze at least few more hours out of a charge than the Galaxy S8 Plus, with its 3,500mAh battery and Quad HD display. The S8 Plus can already last a full day of pretty heavy usage without a top-up, but the Mate 10 Pro can go even longer – and lighter users might be able to get two days out of it. That’s wonderful.

When it comes to storage, though, the Galaxy S8 Plus has the obvious overall advantage. It comes with half the built-in storage, with 64GB vs 128GB in the Mate 10 Pro, but the Galaxy has a microSD slot for cheap, expandable storage. The Mate 10 Pro doesn’t, so you’re stuck with the starting cache.

Both Samsung and Huawei have the ability to use the phone as the brain of a desktop-like computing experience: you’ll need to buy the DeX Station dock for the Galaxy, while the Mate 10 Pro just uses a USB-C-to-HDMI cable with a wireless Bluetooth keyboard. The DeX Station was a bit underwhelming, but Samsung has been updating the experience. Likewise, the Mate 10 Pro’s mode is pretty limited, so neither of these is a huge benefit.

Bit of a mixed bag in this category, really. If you’re big on battery life, then the Mate 10 Pro has an advantage with its beefier battery pack. On the other hand, the Galaxy S8 Plus offers the option for more storage via microSD cards, plus it has Gear VR support.

Which seems more appealing to you? Go with that one. We’re split.

It’s a close call, and Huawei can take that as a statement of praise – because the Galaxy S8 Plus is an incredibly tough phone to beat. Samsung has the slight edge on design here, and it has the higher-resolution screen.

Meanwhile, when it comes to camera quality and processing power, they’re close enough in our book, while you’ll have to decide between battery life and expandable storage as the bigger perk.

For our money, the Galaxy S8 Plus is the best phone you can buy right now (alongside the standard Galaxy S8), and while the Mate 10 Pro is very close in overall quality, it doesn’t have quite the same allure or freshness.

Since you can also find the S8 Plus for less money, well, it’s a pretty easy nod in Samsung’s direction for us.