In a world where action lurks down every YouTube link, three Heroes just aren’t enough.

No, when every leap, splash, crash and climb (no matter how insignificant or embarrassing) must be recorded in total clarity, a new Hero is needed.

A Hero that will capture every concussion in 4K at 60fps, before automatically editing them into a fame-worthy compilation of pain to share with your burgeoning fanbase. That Hero is the GoPro Hero6 Black.

What if you’re not sure about spending R8,500 on a top-end action cam, though? While the days of deciphering the differences between Silver and Black might be behind us, the GoPro range can still look bewildering to a novice.

Thankfully, we’ve sifted through the spec sheets to assess just which GoPro will suit your style of shooting – so you can get back to planning your Sidewalk Parkour Compilation. We haven’t included the reality-bending GoPro Fusion, mind, as you can’t actually buy it yet. Haven’t got the cash for a pro-level shooter? Even in its trimmed down line-up, entry level doesn’t mean basic: GoPro’s Hero Session is a tough cube that’s perfect for shooting videos destined for YouTube or smaller screens.

The only survivor from GoPro’s previous array of action cams, the Session is an ultra-portable shooter designed for quick-click recordings.

Ditching a screen in favour of a compact shell, the Hero Session has a straightforward one-button interface for touch-to-go action. More advanced operation requires a smartphone, connected via Wi-Fi or Bluetooth, to frame, shoot and share.

It’s not well-suited to longer shoots – the battery is good for just two hours – but for speedy, impromptu filming on a budget, it’s tough to beat.

Though it lacks 4K, recording in 1440p at 30fps is plenty good enough for most budding YouTube sharers, while 8MP stills will fare well against most smartphones – especially when you’re 10 metres below the waves. 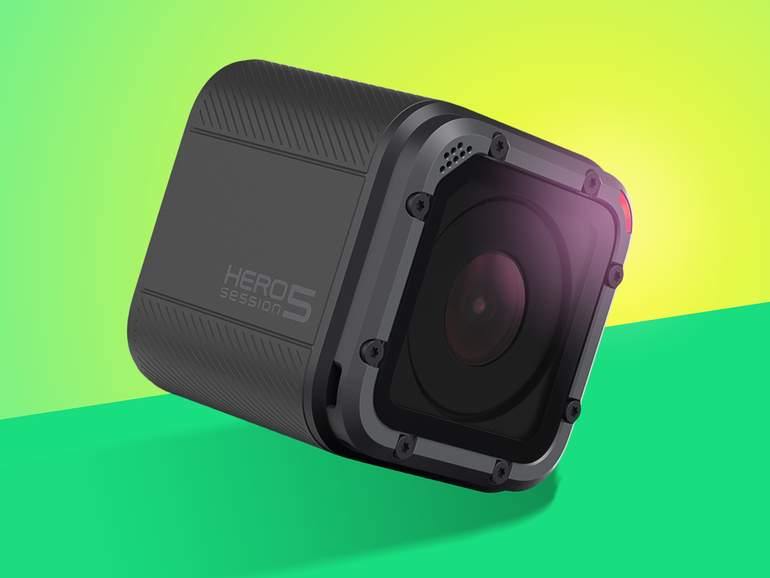 Names, it seems, aren’t GoPro’s strong point: meet the Session. Well, the Hero5 Session. Like the original Session, only smaller, smarter and sharper.

Take everything that was great about the company’s first mini-cam, throw in higher resolution recordings, video stabilisation and voice control tech, and you’ve got a take-anywhere blockbuster of perfect proportions.

Equipped with 4K video capabilities, it’ll also snap 10MP shots with the push of a single button, before automatically uploading your latest action footage to the cloud through the Quik app – provided you’ve subscribed to GoPro Plus.

Like all GoPro models, the Hero5 Session can be attached to many an object, courtesy of a menagerie of available mounts. Given its dinky form factor and Siri-like handsfree smarts, this could be the one to opt for if you’re after a carefree helmet cam.

Pair its steady image abilities with new linear-field-of-view tech – which corrects the fish-eye distortion familiar to many a GoPro user, albeit not at 4K – and you’ve got footage fit for a downhill champion. 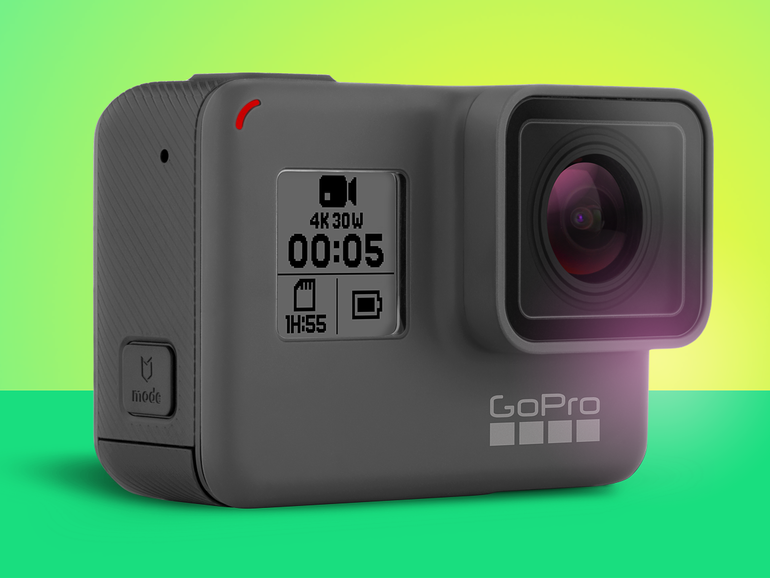 What’s the benefit of RAW? For serious photo fans, it means enhanced editing flexibility without the need to make countless copies.

Bulkier than its brethren to make room for the extra tech, the Hero5 Black can also capture snaps in WDR mode. That’s ‘wide dynamic range’ – and it means your ski slope shots will have a brilliantly broad range of exposure.

Throw in two-axis stabilisation smarts and 120 frames-per-second shooting at 1080p (which is plenty good enough for silky smooth slow-mo) and you’ve got yourself a video powerhouse fit for any situation.

Waterproof to ten metres without a case, the spacious 2in screen will be a boon for underwater explorers, while one-touch and voice control capabilities ought to be a welcome addition for gloves-wearing mountain-goers.

It also offers GPS location-tagging, making it a good bet for documenting longer trips, while Wi-Fi and Bluetooth mean you can pair it with your smartphone for editing duties. So, you want to truly go pro? While the new Hero6 Black might look identical to the Hero5 Black, almost all of its shooting specs have been supercharged to deliver a properly top-end box of rugged recording.

What do you get for the R1,500 price hike over the 5? Everything that its predecessor had to offer (think touchscreen, Wi-Fi, case-free waterproofing and the rest) plus a chip. More specifically, GoPro’s new GP1 processor – and it makes the world look much, much nicer.

Take the image stabilisation: it might not be optical, but GoPro’s new three-axis digital offering is so darn good that it doesn’t need to be.

Frame rates have been dramatically increased, too, so you can now shoot in sumptuous 4K at 60fps, or create super dramatic slow-mo footage in 1080p at 240fps.

In fact, image quality generally is a cut above anything else in the range, with refined auto-exposure, more delicious dynamic range and stellar low-light performance. It all adds up to satisfyingly smooth, properly watchable videos that look good even on bigger screens.

You will, though, need hardware that can handle the new HEVC codec used to record 4K footage. If you don’t own a recent MacBook or Kaby Lake-equipped Windows machine, you’re probably better off with the the Hero5 Black.

If you do, though – and you’re happy with a battery that’s only good for 45 minutes of 4K/60fps recording – then the Hero6 is easily the best GoPro going.