It was going so well.

We had memorised all eighteen of Silverstone’s iconic bends. We knew exactly how hard to push the race-prepped Bentley Continental GT3 into each corner – all 1300 kilos of it. The Stig? We’d have left him in the dust.

Then, the heavens opened. Maggots and Becketts became a waterlogged quagmire, visibility dropped to almost nothing, and finding grip was near-impossible. Two disastrous laps later and we limped home in lowly 16th place.

The Forza games have always felt like a love letter to all things automotive, but the addition of dynamic weather makes this latest iteration a monument to Mother Nature as well.

ALWAYS TAKE THE WEATHER WITH YOU

Battling the elements was an all-or-nothing kind of deal when weather first arrived in Forza 6 – either you started in the wet or you stayed dry until you saw the chequered flag.

Here, conditions can change on the fly.

Start a race in the early hours and you’ll spot mist pockets dotted around the circuit. Head to Dubai’s desert tracks and you’ll have to contend with sandstorms. Dusk quickly turns into nighttime, leaving you to navigate solely by your own headlights – and the brake lights of the other racers.

Aquaplaning is all too easy in wet conditions, so for certain races you’ll be praying for clear skies harder than Fernando Alonso prays for a competitive F1 engine. You can really feel it when you lose traction, too, thanks to the Xbox One controller’s rumbling triggers.

The varied weather and changeable lighting only elevate Forza 7’s beautiful visuals further, with raindrops glistening on your car’s paintwork and clouds becoming increasingly moody as the sun dips behind them. Turn 10’s all-encompassing racer isn’t just gorgeous on the vanilla Xbox One, either – it’s a perfect example of what the Xbox One X is capable of.

From a technical perspective, Having FM7 as the standard-bearer for Microsoft’s 4K-ready console makes a lot of sense. The fixed tracks and car models have been given the maximum amount of polish, so everything shines in 4K and High Dynamic Range.

It verges on hyper-realism in places, with the sharpness, contrast and vivid colours that really make every car, chicane and crowd barrier pop off the screen.

It’s seriously impressive to see a game of this fidelity run at 60 frames per second, especially when the clouds part and the puddles start to appear, adding reflections into the mix. As much as stunning visuals are the bedrock of the Forza franchise, you spend most of your time behind the wheel – so there’s got to be a decent selection of cars on offer, and they’ve got to feel good to drive.

Maybe you thought that the 450 cars of Forza 6 was quite enough to be getting on with, but that’s not how Turn10 sees things. The roster has been expanded to a ridiculous 700 vehicles, including the largest collection of Porsches, Ferraris and Lamborghinis yet seen in the series. Excessive? You bet, but we’re not complaining.

Each car is lovingly rendered, both inside and out, with a brand new dashboard view getting you even closer to the action, cutting out distractions like the steering wheel so you can focus on the road ahead. It’s great for perfecting those apexes, even if it makes it harder to see your wing mirrors.

The engine notes can vary wildly, though. Some, like the throaty Mercedes AMG-GT, do a fantastic job of immersing you in the tarmac-hauling action. Others, like Ford’s modern boy-racer Focus RS, didn’t have the grunt we’d expect – but if you’ve never been behind the wheel of one in real life, you’re unlikely to notice.

It’s how these cars drive that separates Forza from its competition, though. Unlike step-cousin Forza Horizon 3, you can’t just plonk yourself in a Porsche 911, push the accelerator down towards the Earth’s crust and chase the pack ahead through sheer force of will.

Steering response, mechanical grip and general handling are all grounded in reality, but they all feel top-notch, with sublime tactile feedback.

Ok, so handling is a whole lot more forgiving here than in Project Cars 2, where cars are quick to oversteer and require pinpoint inputs to nail the perfect lap, but at least Forza‘s front-wheel drive motors aren’t as inexplicably keen to spin out.

If you were expecting a huge shift change between this and the previous version, you’ll be disappointed, but the overall feel strikes a balance between simulation and an arcade while erring on the side of reality.

Still, the world of FM7 is impressively immersive, it’s almost a shame to play the thing with a standard Xbox One pad. A proper steering wheel is clearly the way to go if you’ve got the funds.

Racking up the wins drip-feeds you with cash and cars, but it also exposes Forza 7’s over reliance on micro-transactions.

Some vehicles only unlock through random prize crates, which also dish out new racing suits for your driver avatar (not to be confused with AI Drivatars), and mods to increase your earnings after races to level up faster.

Essentially it creates a loop within a loop: earn money to spend on crates, which unlock mods to increase your money, so you can buy more crates. Just give us more cars, dammit!

Right now, there’s no way to pay real money for these prize crates, but expect that to change later down the line. It’s just a bit too intrusive for our liking.

ARE YOU KEEPING TRACK? 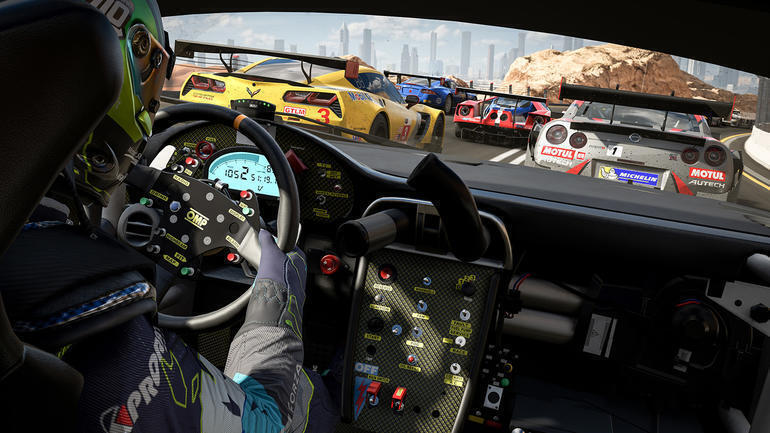 In addition to that abundance of cars, Turn 10 Studios is upping the number of tracks you can race on as well. A whopping 32 locations are ready for you to lay some rubber down on, including the Nürburgring, Tuscany’s Mugello Circuit and an all-new track that’s set in Dubai.

You’ll get to drive ‘em all in all manner of different racing disciplines, but if you were hoping for an epic story tying them all together, you’re out of luck.

The “campaign” is just a series of race championships and one-off events, with each one unlocking more races before you compete for the overall trophy. Compared to Project Cars 2’s in-depth story mode, it all feels quite limited. You’ve got to plug your way through different disciplines to unlock different tiers of car, which can feel like a slog if you’re interested in say, Group B rally cars, but don’t feel like finishing an open wheel legends championship first.

It would be nice if wins in the beginner championship also bumped your score in the later races, giving you a helping hand in unlocking new cars, but they don’t. Once you’ve won the cup, there’s no reason to finish off the rest of the races – just move on and start plugging away at the next championship.

It doesn’t help that the AI can get seriously aggressive, either. Previous Forza games suffered from virtual opponents that were too timid to really hit the throttle at times, but now that Turn10 has shifted to gamer-taught Drivatars, other cars are much more likely to get stuck in and ram you off the road. It can feel like bumper cars at times, with the AI angrily bashing you off the road rather than concede the racing line. Forza Motorsport 7 boasts a ridiculous commitment to realism and graphical fidelity. Whether that’s enough to sell you on the Xbox One X will depend on just how seriously you take your virtual racing.

For proper petrolheads, this is pretty much gaming nirvana – and even if you don’t know the difference between a prop shaft and a parking brake, the beginner-friendly driving assists are a welcome helping hand to get you behind the wheel. There are a few irks, like an over-reliance on loot crates to expand your car collection, but these are the exception, rather than the rule.

Fun is, after all, what makes the Motorsport games a thrill – rather than a true approximation of what life behind the wheel might be like. There’s probably a reason why Lewis Hamilton looks miserable half the time, and we’d rather not find out why for ourselves. Unless someone’s gonna pay us an extraordinary sum to veg out in front of our Xbox, anyway.