Can you tell what a geek looks like any more? Of course you can’t, it’s all acceptable now to be a teeny bit obsessed — which means that Star Wars fans have been hitting the gym.

Actually, they’ve always been there but it’s acceptable now to admit to being a fan of the Force. Which means that you could get away with installing these Star Wars-themed workout items from fitness company Onnit in your home gym. Come on, who wouldn’t want to have a set of Star Wars kettle bells to throw around. You’ve got to have the equipment anyway; might as well make it themed, right? (feel free to try that on whichever person controls the finances at home). Why not give these 23, 27, and 32kg chunks of metal a new home?

Besides the Darth Vader, Boba Fett, or Stormtrooper kettle bells, Onnit also has a frozen-in-Carbonite Han Solo yoga mat (called the Solo Mat) that we’d feel kinda weird about using — though it does sparks some thoughts about what may have been done to Han while he was awaiting rescue. There’s also a Death Star medicine ball (or Slam Ball, if you’re a geeky fitness company) that you can use to tighten up your defences (read: abs). And other bits. 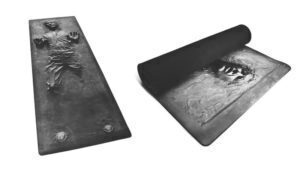 Purchasing this range of Star Wars exercise equipment — which we expect a few of you have already tried to do — might be a little difficult. Not insurmountable, though, as Onnit actually does have a shipping option for South Africa. So you might have to content with customs. And the exchange rate. But it should be worth it, as all of these units are now up for pre-order with the kettle bells starting at $150 (R2,000, for Boba Fett), all the way up to $200 (R2,650, for Darth). The Death Star will set you back $75 (R1,000) and the yoga mat is just $65 (R860). Plus shipping, of course.

Because it doesn’t matter if you’re a Star Wars fan these days — it’s perfectly permissible to be able to wrestle a Wookie to a draw. We’d still let him win if we were you, though.