Sphero’s app-controlled BB-8 droid was a delight back in 2015, but as a new Star Wars character, it didn’t quite have the same emotional pull as one we’ve loved for decades.

Well, our wish is Sphero’s command, apparently, as the company unveiled a remote-controlled R2-D2. He’s pretty much movie-perfect, thanks to his scaled down dimensions and familiar beeps and boops. And like the rest of the Sphero family, you can set him off roving around your home with the iOS or Android app. It’s incredible, right? He’s much, much smaller, of course, standing at around 17cm tall. But the detailing is precise, the paint job appears crisp, and the lights are all spot-on. Given its diminutive size, we’re surprised at just how perfect it looks.

But this isn’t a statue, and there’s much more to it than just the shape and paint: it also moves much like the real thing, from its treads to its rotating dome, and you can even swap between bipedal and tripod stances. R2-D2 will also react to your presence if you’re nearby, as well as to other Sphero droids in range.


With Sphero’s R2-D2, you’ll be able to recreate some of the droid’s most iconic lines from the epic film saga. Who can forget, “Beep boop boop beep boop boop”? Ah, memories.

Sphero tapped into the Lucasfilm and Disney archives and their R2-D2 uses the very same sound effects from the films. And unlike the BB-8 from a couple years back, the speaker is built right into R2-D2, so the sounds emanate from the actual droid – not your smartphone app.

3) YOU CAN USE HIM TO EXPLORE THE MILLENNIUM FALCON Thanks to augmented reality tech, you can use the companion app to explore a kind of wireframed, Matrix-style version of the Millennium Falcon, with R2-D2 responding to your movements.

As you move around its corridors, you get little tidbits of information about sights like the AG-2G Quad Laser Cannon. Sure, your R2-D2 doesn’t add greatly to the experience, but it’s a fun little party trick and requires essentially zero effort or extensive furniture rearranging on your part.

4) OR JUST DRIVE HIM AROUND MANUALLY Who needs a faux Star Wars world when you can set R2-D2 loose in your own world?

R2-D2 comes packed with four motors within – two for the dome, and one in each main leg – which allow realistic movement and independent head and body control. With the app, you can control R2-D2 much like a character in a video game, spinning his head while sending him scooting across your lounge.

Alternately, instead of full manual control, you can use the app’s Draw & Drive functionality and sketch out a quick path for R2-D2 to follow, or draw a circle to make him spin. Planning to loop back on the entire Star Wars saga before The Last Jedi hits cinemas this December? Well, you’ll have a willing and eager companion in R2-D2.

Like BB-8 before him, Sphero’s latest droid can recognise when you’re watching select Star Wars films and react accordingly to big scenes with movements and sound. As of now, he’ll sync up with The Force Awakens, Rogue One, and A New Hope, but Sphero says they’re looking to add the rest of the flicks before The Last Jedi is out.

6) YOU’LL GET AN HOUR OF BLEEPS FROM A CHARGE Sphero’s new droid should last a bit longer than BB-8 too: the company estimates that it will last one full hour on a single charge, which should be just enough time to have your fill of fun before finding some other distraction.

Unlike BB-8, however, R2-D2 won’t have a bespoke charging station to sit on – but that might actually be a good thing. While he’ll lack a throne to rest in, the ability to just plug in a microUSB cable means you’ll be able to charge him anywhere. 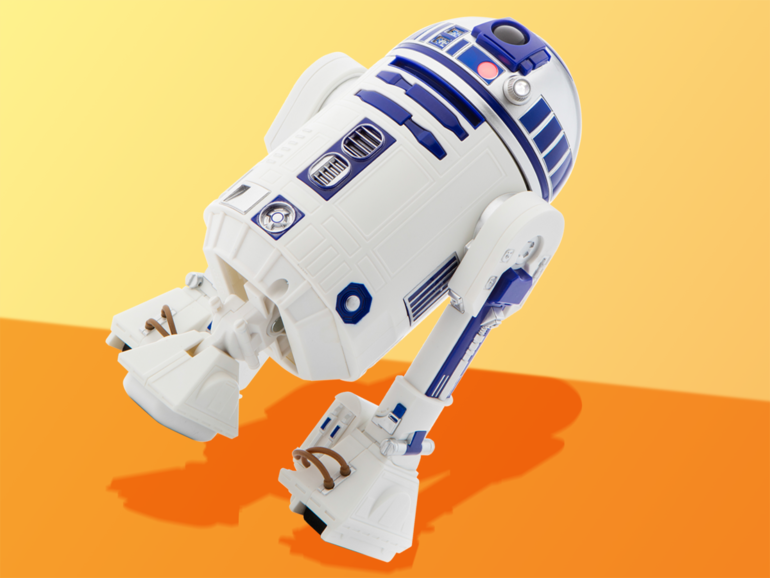 Is this the droid you’re looking for? He’s already available Sphero’s store (which doesn’t ship here), Amazon (which does), or the Disney Store, as it’s gone on sale already. And… is looking pretty sold out everywhere.

You’ll need a pretty solid stack of cash, however: R2-D2 is going for about $225, if you’re looking to not wait till he’s officially in South Africa. That’s about R3,000 but it includes shipping and taxes via Amazon. It’s a little steep but…

But to bring a working, talking R2-D2 into your life? Well, we’re honestly tempted. Look out for our hands-on review very soon.