In the market for a really big, really expensive smartphone? Well, Apple’s iPhone 7 Plus remains an appealing pick… but here comes Samsung’s Galaxy Note 8 to add another contender.

Last year’s Galaxy Note 7 launch went up in flames (quite literally) when defective batteries yielded explosive results, forcing Samsung to recall all of the devices. We expect a much smoother rollout for the Galaxy Note 8, which builds upon the foundation of last year’s short-lived handset.

Meanwhile, Apple seems all set to announce an iPhone 8 of its own in a matter of weeks. But if you need a new top-end phone right now, then you might be considering the iPhone 7 Plus alongside the Note 8. Which seems like the best device to spend a whole heap of money on? Here’s our initial verdict based on the specs and our hands-on time with the Note 8. 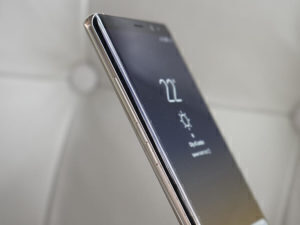 Look, we dug Apple’s minimal aesthetic when the iPhone 6 Plus debuted two years ago… but with the same basic design repeated for the third time with the iPhone 7 Plus, it just doesn’t yield much excitement anymore. And those huge bezels haven’t aged well at all.

The iPhone 7 Plus gets the job done and it’s certainly not ugly, but there are more striking handsets on the market now. Like the Galaxy Note 8, for example.

Building upon the brilliant look of the Galaxy S8 and S8 Plus, the Note 8 keeps the nearly-all-screen face with its minimal bezel and curved Infinity Display, but sharpens the curves for a slightly flatter, boxier look.

It looks fabulously modern and cool, unlike the iPhone 7 Plus, which is adequate but honestly a bit tired at this point. The iPhone 8 might shift the balance back towards Apple, but in this particular showdown, Samsung takes the easy win.

SCREEN: INFINITY AND BEYOND Another easy win for Samsung? The screen, of course. Apple’s 5.5in flat 1080p LCD display is pretty nice. The Plus’ panel has strong contrast and excellent brightness, and very good sharpness. It’s certainly a step up from the 750p screen of the standard iPhone 7.

But the Galaxy Note 8 is in another class here. It’s a Quad HD champ, with an added level of sharpness that you just don’t get from the iPhone 7 Plus, while the Super AMOLED panel means we get deeper blacks and improved contrast. And it supports mobile HDR content, to boot.

Assuming it’s just as strong as the Galaxy S8’s screen, then it’ll stand alongside it as the best smartphone screen in the world. And the extra tall screen dimensions, thanks to the 18.5:9 screen ratio, means you get a bit more real estate for media, web browsing, and more.

The iPhone 7 Plus does have the benefit of 3D Touch pressure sensitivity for added navigational abilities and benefits in apps and games, but it’s not the most critical addition, and certainly not one that’ll swing this battle towards Apple’s favour. 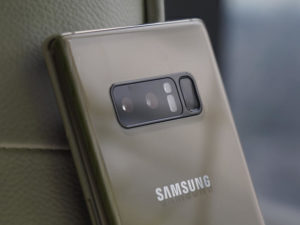 Look, the Samsung Galaxy S8 already has one of the best smartphone cameras on the market today, and it only has a single sensor on the back. Meanwhile, the iPhone 7 Plus has its dual-camera setup that allows for blurred-backdrop portrait shots and variable zooming, but in our tests the Galaxy S8 still came out ahead.

The Galaxy Note 8 keeps the Galaxy S8’s main sensor, but then – in a very iPhone 7 Plus-like manoeuvre – it adds another. An f/2.4 sensor is right there alongside the main f/1.7 sensor, both at 12 megapixels, and it adds optical-like variable 1x/2x zoom, along with the same kind of portrait tricks as Apple’s phone and others on the market.

Meanwhile, the iPhone 7 Plus has two 12MP sensors at f/1.8 and f/2.8, respectively. It produces pretty excellent shots most of the time, but we thought the Galaxy S8 still came out ahead… and the Note 8 adds even more benefits on top of that.

In short: it’s too early to tell for sure, and we’ll need to put the Note 8 through extensive testing, but we have a hunch that it’ll take this category. We’ll have to see what kinds of enhancements Apple packs into the iPhone 8, though.

Unsurprisingly, given their high prices and profiles, both of these devices are absolute monsters when it comes to performance. The iPhone 7 Plus packs Apple’s own A10 Fusion chip, which is a speed demon and handles games, apps, and media with ease, even with a relatively modest 3GB RAM bundled in.

The Galaxy Note 8, meanwhile, doubles that RAM tally to 6GB alongside Samsung’s Exynos 8895 chip, which is the same beast seen in the Galaxy S8. Likewise, it’s a benchmark-slaying hero capable of handling pretty much anything you throw at it. The iPhone 7 Plus packs in a 2,900mAh battery pack, which provides solid all-day usage, while the Galaxy Note 8 comes in a bit ahead with a 3,300mAh cell of its own. That’s a step down from the Note 7, which is probably smart given last year’s battery debacle.

However, it means we’re unsure whether there will be any real advantage for the Note 8 over the iPhone 7 Plus. It has 400mAh more to play with, but the Note 8 is also powering a larger, sharper display – so any difference in uptime could be minimal. We’ll have to see once we get our hands on a proper review unit.

Also, the Note 8 has wireless and fast charging, both of which the iPhone 7 Plus lacks. And as far as other perks go, the Galaxy Note 8 should take a commanding win in this category.

The Galaxy Note 8 offers microSD support for expandable storage beyond its 64GB built-in memory, while Apple has no such option: you’re stuck with the 32GB, 128GB, or 256GB you pick (and pay for) from the start. Also, the Note 8 supports the Gear VR headset and DeX station for using your phone as the brain of a desktop PC-like experience.

And did we mention the stylus? The S Pen is the Note line’s defining feature, of course, and the Note 8 adds in extra abilities – like translating entire sentences on the fly. You can still scribble down notes and doodles, as well, and overall, it can provide a huge productivity boost. The iPhone 7 Plus has nothing like that.

Also, the Galaxy Note 8 still has a headphone port. Boom. Look, right now isn’t the best time to buy an iPhone 7 Plus: it’s a year-old phone, and the iPhone 8 – expected to offer a pretty significant upgrade – should be out in a matter of weeks.

And with that in mind, the comparison here is a bit lopsided in the Note 8’s favour. It has the more striking design, the better screen, a potentially improved camera, and a lot of bonus perks. It’s also more expensive, however, so certainly consider that when pitting these two devices against each other.

Even so, we’d say the Galaxy Note 8’s myriad benefits warrant the extra cash. But seriously, if you’re even thinking about buying an Apple, wait a few weeks before making a decision here.