Smartwatches have been ‘the Apple Watch show’ for too long, but things are finally about to get interesting – enter player Fitbit.

We’ve long known that the king of fitness trackers is stepping up a weight class to take on the Apple Watch. And now it’s here in the form of the Ionic, a smartwatch with built-in GPS, waterproofing and a heart-rate monitor.

The good news is that the Ionic is a lot more interesting than the chemical compound you learned about in high school chemistry. On paper, it’s the Apple Watch rival we’ve been waiting for.

Need a quick, easily digestible rundown of its headline features? We’ve chucked the raw info into our factual Nutribullet to bring you this – a tasty smoothie of its most interesting bits… Fitbit’s design ethos has so far been more ‘functional’ than ‘fashion icon’, but we were impressed by the Ionic’s smart look in our brief hands-on.

While the hexagonal Blaze was a bit too angular for our liking, the Ionic’s trim, minimalist form definitely marks it out as an all-day wearable. The flush heart-rate sensor should boost its comfort factor too.

Okay, it’s not quite going to match your favourite suit, and less capable trackers like the Timex IQ+ Move are certainly more subtle. But the Ionic is a good alternative to the Apple Watch’s subtle blend of fitness and fashion.

2) THE BATTERY LIFE SHOULD TROUNCE THE APPLE WATCH 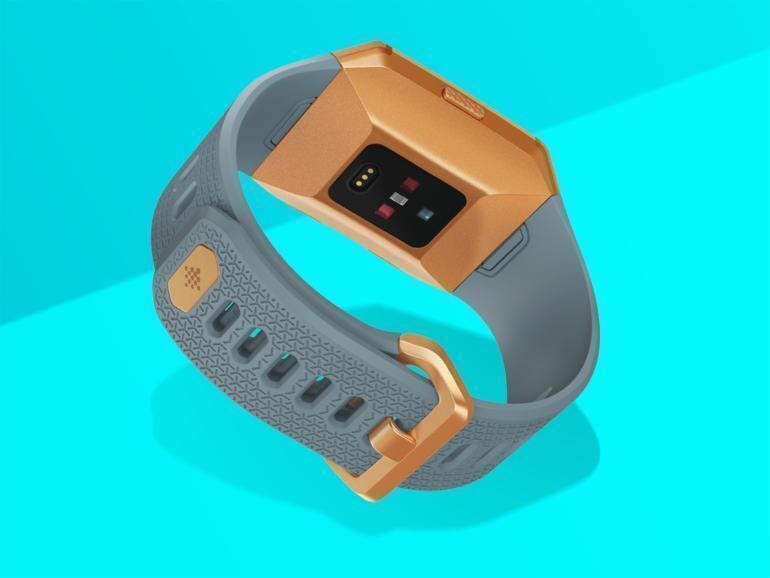 Battery life claims always have to be taken with a few pinches of sodium chloride, but in theory the Ionic should last you four days – which is well over twice as long as the Apple Watch.

The disclaimer here is that we don’t know exactly what scenario the Ionic’s battery life claim relates to. Is that workouts with music playback and GPS tracking? A real-life test is the only way to know for sure, but for now we’ll mark the four-day claims as ‘promising’.

It’s no match for watches like Garmin’s Forerunners (which have lower-res screens), but we’ll be happy if the Ionic pushes capable smartwatches into ‘two charges per week’ territory. What makes the Ionic a ‘smartwatch’, rather than a watch-shaped fitness tracker like the Blaze? It has an app store and an OS that can run third-party apps.

Exactly which apps will be available from the ‘App gallery’ at launch isn’t clear. The choice is likely to be initially quite threadbare, with Strava and Accuweather the only ones to be confirmed to us. Stalwarts like Google Maps, WhatsApp and Uber might arrive at a later date.

One benefit over the Apple Watch, though, is that Fitbit’s OS works in a similar way to the now perished Pebble OS, in that it lets you download apps without installing them on your phone first. It is standalone powers like this that show where smartwatches are headed.

4) IT COMES WITH A BUILT-IN PERSONAL TRAINER The Ionic’s special smartwatch skill is the Fitbit Coach, a kind of built-in Mr. Motivator for your health and fitness routines.

It has guided workouts across exercise, meditation and nutrition. You get three static workouts plus a dynamic one for free but, like the Fitstar platform that Coach replaces, there are extra paid one workouts.

This means you’ll likely end up shelling out more to unlock the Ionic’s full powers. But we reckon the built-in GPS, 50m waterproofing and heart-rate tracking will prove enough for most people’s fitness needs.

5) IT’LL PLAY YOUR RUNNING MUSIC, BUT NOT FROM SPOTIFY The Ionic looks a good fit for casual runners, thanks to run detect and auto-pause. And you’ll be able to use it as your portable music player too, thanks to Bluetooth and its internal storage.

The downside? That means loading it up with old-school MP3s rather than offline Spotify songs. With a third party Spotify app in the works for the Apple Watch, the Ionic will need to work on this important feature to keep up. We can’t imagine many people being happy to root around for old MP3s for long.

6) THERE’LL BE A SPECIAL ADIDAS EDITION Like a WWE tag team special, the Ionic has come to the ring and announced its secret partner as…Adidas! Cue hollering from fans, as they prepare to witness a Fitbit/Adidas vs Apple/Nike ladder match.

Exact details of the Ionic’s special Adidas edition are scarce, but we do know it’ll have some special watch faces and training programs that’ll be out in 2018. Expect to hear once the standard Ionic is out in the wild.

7) YOU’LL BE TO USE IT FOR MOBILE PAYMENTS, EVENTUALLY Like Android Pay and Apple Pay, you’ll theoretically be able to tap the Ionic on a shop’s contactless payment terminal to get yourself a post-workout ‘recovery drink’ (full-fat milkshake).

The downside is that, right now, Fitbit can only confirm that Mastercard, American Express and Visa are supported, with no concrete details about bank support yet. Until that happens, this will be a slightly niche feature compared to rival smartwatches. And the other downside is that, yes, South Africa is near the back of the queue for features like this. People overseas should appreciate it, though. Whether or not this remains a bargain depends on what happens at Apple’s big event on September 12. If Apple announces an Apple Watch 3, it’s possible that the Apple Watch 2 will get a price drop that’d bring it into the territory of, or possibly below, the Ionic.

Alternatively, the Apple Watch 3 might be a new, SIM-equipped premium option that sits above the Watch 2. Either way, we (and Fitbit) will be watching Apple’s event closely before making any smartwatch decisions.

The Ionic’s Christmas stocking potential is good, with the smartwatch available to buy from the Fitbit site in October 2017 for $300 (R4,000, give or take a markup and/or cabinet change).

By then, we’ll know whether or not an Apple Watch 3 will be flying into contention for the spot on our wrist.

Look out for a detailed versus comparison when we’ve put them head-to-head in a gym-based slugfest.