That amazing future, where you don’t have to bother installing software, because everything’s on the internet? Already here. But you probably knew that anyway, through using Google Maps and Google Docs, and Google Everything Else.

What you might not know is the sheer range of things you can do in a browser, and how brilliant many web apps have become. Stuff set two rules for inclusion in this list: the apps have to be properly good; and absolutely no Flash (because Adobe says it’s soon going to live on a farm). The majority of streaming music services provide some kind of web player, but Amazon’s doesn’t immediately demand you install Flash. What’s more, it has quite the range of payment options.

If you’ve bought shiny discs or digital music on the site in the past, chances are copies will lurk inside Amazon Music, ready for playback. Got Amazon Prime? That’s another two million tracks to peruse. Want more? You can go unlimited for R150 a month – and this all works inside your browser.

THE INDIE CHOICE: BANDCAMP
If you have more of an indie bent, Bandcamp offers online playback for much of its music – and anything you buy. On the latter, it also hurls more money at artists than the competition, so you can properly support those you like. Actual designers will balk at Canva’s suggestion that anyone can “easily create beautiful designs”; a graphic designer armed with InDesign will almost certainly still end up with more polished results. But it does open up a certain kind of design to the masses.

Want to knock up a quick poster? There are dozens of templates, which can be tweaked. Fancy something more custom? Grab a blank grid and add your own text, shapes and images. Whatever you make can be exported as PDF or JPEG, and although some bits and bobs lurk behind a paywall, most of Canva’s features are entirely free. Although you can merrily smash words into shape using Google Docs, its various buttons and menus can be a distraction. Draft instead takes its cue from minimal writers such as iA Writer and WriteRoom.

In use, it’s mostly just you and a sea of text. But Draft’s minimalism doesn’t mean it lacks features: move the cursor and you get a word count; write in Markdown and you can preview the result in HTML; major versions of your text can be saved as drafts; and you can collaborate on your paragon of wordy goodness with friends.

YOUR PERSONAL CRITICS: HEMINGWAY AND CLICHE
Because the machines are truly taking over, they can now critique your pitiful human writing. Hemingway flags instances of passive voice, and sentences that are hard to read. And, brilliantly, Cliche Finder highlights cliches in pasted copy. In red. A read-it-later web app might seem an odd inclusion in this list. After all, much of the power of Instapaper is in enabling you to fling web-page content at its mobile apps, for later perusal on the loo.

However, if you’re the kind of person who accumulates tabs during the day, sending interesting articles to Instapaper is a smart move. And given that the web version gives you a very readable and configurable reading experience, it’s a good way to take in content from your favourite sites at leisure. This one’s all about forcing as many words into your brain as possible within the tiniest amount of time. Mostly, this occurs through flash cards, into which you type a missing word. At any point, you can tap the right cursor key to preview a word, without penalty.

The app keeps track of your progress, drumming tricky words into your head until they stick. Smartly, key concepts are brought up in context, and before long you’ll be yelling hablo español fluidamente out of the window, until your neighbours demand you stop. The idea behind the Pomodoro Technique is to transform the working day into shortish sprints, followed by tiny breaks. The thinking is you can optimally focus on a task for about 25 minutes, after which point your brain goes a bit insane.

This app gives you such a timer, with the added benefit of numerals so large you could probably still see them when standing across the street. Want something simpler? There are custom and ‘kitchen’ timers too. 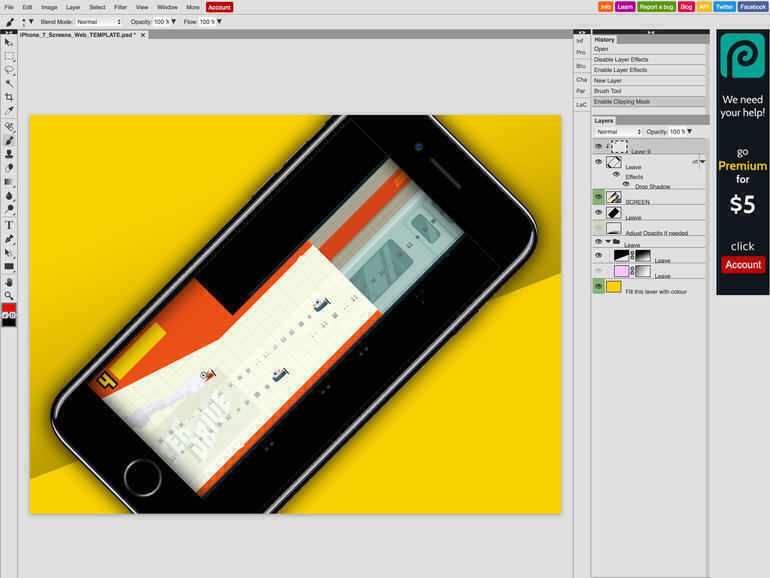 Photoshop in a web browser? Surely not! OK, so this isn’t actually Photoshop, and it doesn’t have all of Photoshop’s tools. But Photopea does look an awful lot like Adobe’s powerhouse; moreover, it can successfully import, edit and export PSD files. Bloody hell.

You’ll need a big display to get the most out of the app (not least because the palettes can’t be rearranged); but mostly you’ll probably just sit wide-eyed at its existence – not least if you’ve used Photoshop, and are now gawping at a usable pretender sitting inside a web browser. We’re used to editing snaps on smartphones, but doing this in a browser shows how far web apps have come. Dump a favourite pic into Polarr, and you can add filters, and make all manner of adjustments.

Although this is the online arm of Polarr’s cross-platform offering, which locks some tools behind a paywall, you still get loads for free. And edits are non-destructive, too, so you can go back and change things if you decide ramping up saturation to ‘eye searing’ ten steps ago wasn’t the best move.

THE QUICK FIX: AVIARY
Although in similar territory to Polarr, Aviary is simpler. For a start, there’s a speedy Enhance option, for when you can’t be bothered making the effort to fine-tune things yourself. Also, you can splatter your photo in stickers and meme text – as is seemingly law these days. There are loads of web apps for sketching, but most output imagery that’s a low-res mess, meaning you can’t use it for anything useful. By contrast, Sketch is vector-based, so you could cover the side of your house in your masterpiece, if you could find a big enough printer.

If you’re an Illustrator whiz, you can draw Bézier curves with a pen tool. If not, there are pencils and brushes for freehand scribbling. You can even import photos to trace over, if the thought of starting with a blank canvas is terrifying. This online weather app makes even the most visually interesting rivals look like they’re aping a 1970s TV report with stick-on clouds. Half the screen’s taken up with a hypnotic animation showing wind speeds, on to which you can overlay rainfall, temperature, and more.

Elsewhere, you can delve into local webcams, see whether rain’s going to wreck your weekend plans, and discover when the sun will next make an appearance, assuming it’s not hidden by thick grey cloud.

KEEP IT SIMPLE: DARK SKY
If you’re a ‘just the facts, man’ sort of person, check out Dark Sky for your weather fix. You get a no-nonsense outlook with handy temperature-range bars, a simpler but still handy map, and a rainfall predictor for the coming hour, so you can decide whether it’s safe to leave the office/house/pub/massive tree you’re sheltering under.