Snapchat is one of the most popular photo sharing apps around, but with frequent updates and hidden features, being a Snapchat pro is a skill that requires real creativity and the right intel.

If you’re itching to up your Snapchat skills, these tips and tricks will make sure your game is on fire, putting you way ahead of the guys who have just discovered the dog face filter. 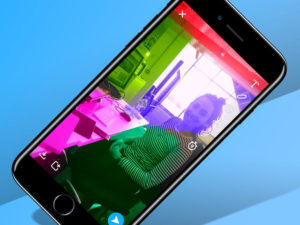 If stickers and emojis just don’t cut it, you can use Snapchat’s latest feature to edit your pictures, Photoshop-style. Just tap the scissors and the magic eraser and colouring changing tool will appear. You can also apply patterned backgrounds, and if you choose to edit a photo from your camera roll you can insert backdrops from famous paintings.

You no longer have to stalk your friends’ stories to try and work out if they’re hanging out without you. Snap Map tells you the location of all of your friends who have the app open, as well as Stories at landmarks around the world. Just open your camera, pinch as though you’re zooming in, and the ‘See The World’ feature will open. If you want to go incognito. just switch on ‘Ghost Mode’ and your location will be undetectable. Creepy? Yes. Will we use it? Absolutely.

If you consider yourself a bit of an artiste then you’ll be pleased to know your talents are no longer bound by Snapchat’s humble pencil feature – because you can now draw with emojis. Simply tap the star symbol under the colour bar once you’ve finished your sketch, then marvel as your rudimentary doodling is transformed into an emoji masterpiece. Nobody was expecting a dancing hot dog to steal back Snapchat’s crown as our favourite photo sharing app. Neither did we expect it to be so bloody funny. To provide your friends with all the lols, open your camera and pick the hotdog icon from the selection of face filters. Drag and drop the boogying frankfurter into crowds, around the office, or in the… bathroom…? and wait for the #rofls to roll in.

Ever been snapping your pals on the dancefloor when a brilliant (but unknown) tune comes on, and you really want to know what it is? Snapchat has paired with music ID service Shazam to take away this stress. Just open the camera and press the screen for three seconds during the song. Not only will Shazam tell you what’s playing, Snapchat will then bring up the artist’s Snap code and give you the option of following them. Trust us, Bitmoji’s are the next best thing to putting actual people in your pictures. These personalised emoticons are cartoon mini-mes that you can design with the Bitmoji app. Once you’ve linked your account to Snapchat via the stickers page, you’ll have dozens of images of your avatar dressed as a sandwich, sitting in a teacup or driving a car. Or maybe that’s just us. Snapchat comes with a huge range of face filters which make you look #cute on the most hungover of days, but what if your voice needs some TLC? You can now apply alien, robot, bear and chipmunk voice distortions to any audio you record. Perfect for when you wake up with a husky voice, and hilarious when applied to songs. To get these, film your snap and tap the sound symbol in the bottom left corner of your screen.

Occasionally we make Snapchat stories that are quite simply Oscar worthy, so waving goodbye to them after 24 hours is heartbreaking. Memories lets you save clips directly to the app, freeing up phone space while you compile the footage for your debut at Cannes. Simply tap the Save symbol after you’ve snapped and your footage will be safe forever. Everyone loves Snapchat’s famous selfie filters – who doesn’t want to look like a puppy on the way to work? But you probably didn’t know that you can apply them to snaps without people in. World Lenses are augmented reality filters and add moving scenery and animals to your pictures.

Fact: Stories are always told better with emojis, especially when they can appear just at the right moment. To make an emoji stick to something during your footage, hold it down when the object comes into shot. Let go after three seconds and watch as the little poo emoji sticks to your friends. For instance. That’s just a suggestion.

Some stories need to be told more than once. In fact, some of them need to be told forever, which is why Snapchat’s ‘Infinity mode’ is so great. Just before you send your snap, tap the ‘loop’ sign and your video will play on repeat rather than sticking to the old 10-second limit. They will still disappear when your friends quit your pic, but this stops them being deleted immediately. Ever wondered what the emojis that appear next to your friends’ names actually mean? Have a look under ‘Manage’ in settings and you’ll see that they all relate to the length of your Snapchat streak, aka how long you and your friends have been Snapping every day. You can even change the emoji for each category.

Create your own stickers

Snapchat’s encyclopedia of stickers is one of its best features, and you can now make your own. Just take a photo, select the scissors, and cut out the section of your snap you want to turn into a sticker. These will then be added to your library for you to use whenever. Hold your horses: you can now win awards for how you use Snapchat. Whether it’s through submitting live videos to a local story or screenshotting snaps, the more you use the app the more trophies you win. Check out what you’ve unlocked so far in your trophy cabinet, just above your Snap Code.