Back in June, we enthused about features coming to macOS High Sierra, but now we’ve taken a deep dive into the public beta, we’ve got a better idea of how those new bits and bobs actually work.

Here are the eight things that most tickled our happy place, plus a handy cut-out-and-keep guide to installing High Sierra without blowing up your Mac. (Top tip: don’t attack your monitor with scissors. That won’t end well for anyone.) Live Photos are gimmicky, but also great, infusing stills with life when you hover the cursor over them. (Insert Harry Potter magic joke here.) But in High Sierra, you can finally edit them.

That includes being able to turn off the sound, loop that photo of you jumping into a swimming pool so it looks like you’re stuck in a Matrix glitch and finally (finally!) pick a different key photo for each snap. Lovely.

HOW TO INSTALL THE MACOS HIGH SIERRA PUBLIC BETA

If you’d like to install the public beta yourself, head over to the Apple Beta Software Program, and sign in with your Apple ID. Once you’ve enrolled a Mac, the High Sierra beta will show up inside of the Mac App Store.

If you’re insane, you’ll install it immediately. If you’re only mildly unhinged, you’ll back up your Mac first. If you’re a sensible type, you’ll (assuming you’ve got room on your Mac) head to Disk Utility, select your Mac’s disk, click Partition, carve out a new 50–100 GB or so volume, and install High Sierra on to that.

As the famous saying (that Stuff may have just made up) goes: ‘Beta software can punch you in the face and hurl your Mac into the heart of the sun’. So be warned if taking a more cavalier approach.

2. AHEAD OF THE CURVE

Photos was already a surprisingly capable photo tweaker, but Apple’s gunning for pros in High Sierra, with a new Curves tool. This enables you to work with individual channels, and use colour pickers to select black, grey and white points.

Are you more of a filter-clicker? Well they’ve had an overhaul, too.

3. KEEP THE NOISE DOWN Do sites that autoplay video over your music annoy you to the point you hurl your Mac out of the window? Your bank account will be pleased at the new Safari, which by default stops noisy videos playing until you click them.

Auto-play can also be defined on a per-site basis, allowing it (if you’re mad), or disabling it entirely. 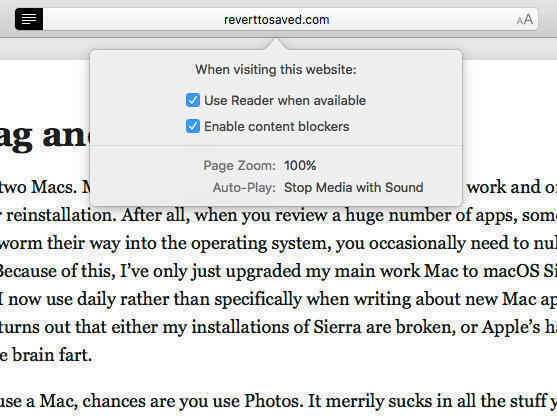 Apple’s Reader feature removes clutter from websites, leaving only text and images, the former of which can be configured to your liking. This view can now be triggered automatically on a per-site basis when Reader is available (usually on individual article pages).

In the early beta, this doesn’t always work; when it does, it’s handy for getting content without clutter. Spotlight’s still spotty when it comes to grabbing information from the web, but along with weather and sports results, it can now provide flight details.

You need to type in an actual flight number – trying to coax details from ’Flight London to Reykjavik. HELP ME, SPOTLIGHT, FOR CRYING OUT LOUD!’ does nothing. But armed with the magic numbers, Spotlight will display times, the flight’s status, and a little map.

Go full-screen in macOS Sierra’s Mail, and the compose area covers the emails in your inbox – annoying when you’re trying to refer back to something. In High Sierra, you instead get a two-up split-screen view, with your inbox on the left and a compose window on the right.

In short, Mail is no longer a memory test or an ‘amusing’ game of ‘keep opening and closing the compose window’. 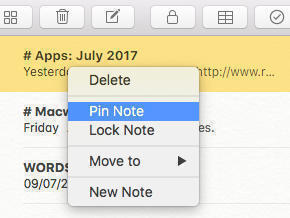 As with Mail, one of the subtle tweaks in Apple’s Notes app may change forever how you use it. You can’t yet reorder your notes alphabetically, because presumably the Notes team leader is a sadist – but you can at least pin often-used notes to the top of the list. So that’s something. It’s going to take a lot to wrench people away from sharing files using Dropbox and Google Drive. Still, Apple’s having a go with iCloud Drive.

You can now share iCloud Drive files, but there’s a catch: the recipient needs to have an iCloud account before they can get access. Still, at least the wall on this particular walled garden’s been lowered a few metres.