We’ve been following the leaky progress of the Galaxy Note 8, as we tend to do, and we’ve been expecting an August reveal for Samsung’s new Note for some time now. We don’t have to wonder whether those rumours were accurate any more, as Samsung has sent out media invites for the Note 8 launch, confirming the event date in the progress. 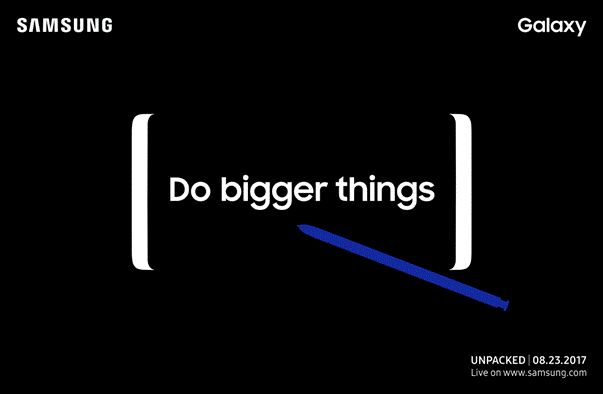 Samsung’s invitation (above) tells us a few things, aside from the 23 August date. The ‘Do Bigger Things’ and the blue stylus are obvious references to the Note 8 handset while the bracketing is very suggestive of the Galaxy S8’s teaser material — so those reports and leaks of a new look for the Note 8 are looking more and more justified. There’s… not much else to go on this year.

Original estimates for the Note 8’s launch event were 26 August, so early reports were not far off. What the invite isn’t explicit about is the venue, but that’s okay because we know it’s going to take place in New York. Expect a few parallel events to pop up around the world at the same time.

Samsung’s announcement event seems to be timed to intrude on Apple’s iPhone announcement, which is due to take place in early September. This is a similar plan to last year’s event, except we all know how that little gambit turned out. This year should be a kettle of fish of a different colour, though. Probably a shade of blue.