Our Warlock smashed the Vault of Glass, witnessed Crota’s End and defeated Oryx, The Taken King himself, but he’s been floating in orbit for far too long. If, like us, you haven’t been back to Destiny since Rise of Iron arrived in September last year, you might need a few pointers to help you get ready for the much-anticipated sequel.

And with the first open beta kicking off later this week, who better to get some help from than Destiny streamer extraordinaire and all-round fountain of Destiny knowledge Arekkz?

So whether you’re a regular visitor to the Trials of Orisis’ Lighthouse, or you don’t know the first difference between light levels and loot engrams, we’ve got the info you need.

1) YOU’LL GET A FIRST TASTE OF THE NEW STORY


Destiny 2 is on track to have a much more gripping story than the original game – and you won’t need to head online to read grimoire cards to learn all the details either.

Whether you’ve been playing since day 1 of Destiny, or you’re jumping in for the first time – Destiny 2’s campaign wipes the slate clean. The beta lets you try the first story mission, Homecoming. You’ve got to defend the Tower, the place we’ve called home for the past 3 years, from the Cabal Red Legion and its leader Dominus Ghaul.

The Cabal will be the dominant force in Destiny 2 – they’ve laid waste to your home, and taken everything you held dear (like that exotic Gjallerhorn rocket launcher). Some units will be familiar if you’ve played Destiny before, but others are brand new, never before seen enemies.

Arekkz top tip: The Cabal aside, Destiny has plenty of other enemy races out there to line up in your weapon sights. The Vex will make an appearance or two throughout the beta.

We hope you pre-ordered a copy of Destiny 2, as you’re not getting in without the beta code that came with it, until the 21st of July anyway. You did pre-order? Great news! Now head to the Bungie website.

Log in with your console ID (Sorry PC players, this first beta is console-only for now) and click on the menu in the top right to find the Code Redemption screen. Pick your platform and region, add your code, and you’ll redeem it for a PSN or Xbox Live code.

Pop this new code into your console, and you’ll be able to download the beta. It’s a 15GB download on PS4 (although you’ll need 30GB of free space to install it) and 13GB on Xbox One. Better clear off some older games if you’re running low on space. Destiny’s co-op Strike missions let three players team up and tackle a level as a trio, blasting through grunts and facing off with a big boss at the end. They’re not quite as challenging as a full-blown Raid, but they won’t take you hours to finish either.

There’s a brand new one to try out on the beta, of course. It’s called the Inverted Spire, and sees you fighting the Cabal and the Vex on the brand new planet Nessus.

Arekkz top tip: Guardians have never had the chance to explore Nessus before, but with a Vex-Cabal war going on, you won’t have time for sightseeing. Lock, load, and let your guns do the negotiating. 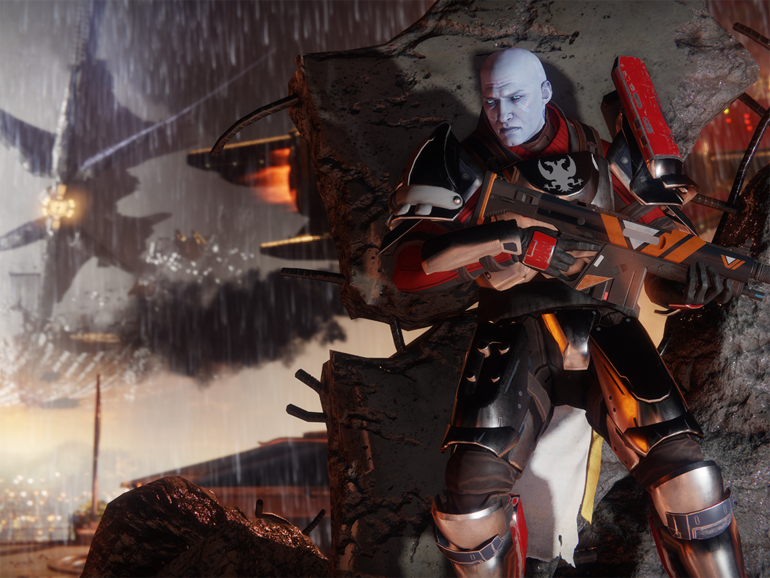 Got a bit of a competitive streak in you? Then head to the Crucible and face off in Destiny 2’s new 4v4 multiplayer matches. There will be two modes available to try in the beta: Control and Countdown.

Control is a staple of the Destiny experience, with three capture zones dotted around the map for you to hold. The points you earn per kill relate to the number of zones your team holds. You don’t have to scramble for the nearest point at the start of the game now, though – each team starts the round with one point already captured.

Countdown is an elimination game type, where you’ve either got to plant bombs, or defend the points while taking down the enemy team. So far, so Counter Strike. The difference here is you get a limited number of revives per round, so you can bring your teammates back to life and turn the game around at any moment.

Arekkz top tip: Keep a close eye on how many revives you’ve got left in a Countdown game – once you’re out, you’re out until the end of the round, just like Trials of Osiris. Destiny is no stranger to planet-hopping, but the sequel will let you explore more of the galaxy than ever before.

That includes the new European Dead Zone back on Earth, as well as Nessus, a brightly coloured planet occupied by the time-travelling Vex. Both will be unlocked during the beta, but new new planets and moons like Io and Titan will be saved until the full game arrives.

There are two multiplayer maps to learn, too. Vostok is a returning location from the original Destiny, having first shown up as one of the Trials of Osiris battlegrounds, but Endless Vale is all-new. It’s a close-quarters map that’ll favour shotguns and melee strikes.

Arekkz top tip: Make sure to play on the very last day of the beta (that’s June 23rd) – you’ll get a chance to visit the new social space, ‘The Farm’. This is where you’ll be hanging out between missions, meeting other Guardians and decoding all those luscious legendary engrams.

5) TEST EACH OF THE NEW GUARDIAN SUB-CLASSES Destiny’s players might have mastered the current crop of Guardian sub-classes, but they’ll have a brand new set of abilities to learn in the beta. Each character gets a fourth subclass: the Hunter has Arcstrider, the Titan unlocks Sentinel and the Warlock gets Dawnblade. Each one has new latent abilities, as well as unique grenades, melee strikes, jumps and super attacks to try.

Arcstrider equips the Hunter with a lightning-imbued bow staff, letting you vault towards enemies with ridiculous speed and bash ‘em with melee strikes.

Sentinel Titans can summon an shield of Void energy, which can absorb damage for the rest of your team. Or you could chuck it around, Captain America-style, and take out enemies in an offensive blitz.

Finally, Dawnblade warlocks can summon a fiery blade for up-close attacks. You’ll be able to rain down fire from the sky, too – activating your super also sprouts flaming wings from your back.

Arekkz top tip: You won’t be able to carry your gear and light level over from the beta to the full game when it arrives in September, so you might as well try all three player classes to find out which one suits you best. That way you’ll be good to go as soon as Destiny 2 launches.

6) …AND GET SOME SWEET, SWEET LOOT What do you need? Guns. Lots of guns. Your hoarded arsenal of heavy artillery from the first game might be MIA, but Destiny 2 will quickly give you plenty of hardware to replace them.

The weapon types range from Hand Cannons and Auto Rifles all the way up to Shotguns, Sniper Rifles and Rocket Launchers. Now though, they fall into three categories: Kinetic, Energy and Power.

An Auto Rifle could now fall into the Kinetic or Energy types, with the latter coming imbued with Solar, Arc or Void elemental properties for bonus damage, or for ripping through enemy shields.

The Beta will give you a chance to test out most of these weapon types, so if you’re not sure which one you like the best, give ‘em all a try.

Arekkz top tip: OK, you’re probably not going to be rocking any legendary gear in the beta, but remember the weapon selection is just a taster of what’s to come. Expect plenty of exotic firearms once Destiny 2 launches for real.

Destiny 2 arrives on PS4 and Xbox One on the 6th of September, with a PC release scheduled for the 24th of October.