Mini-Bar Ones are great. Take a bite and you’ll get the same mouthful of chocolatey goodness as the real thing – but you won’t feel nearly as bad for polishing the whole thing off.

That’s kind of the idea behind the Huawei P10 Lite.

It’s a diluted version of the attention-grabbing P10, which ditches the Leica-branded dual cameras and just-gotta-see-it-in-the-flesh shades of green and blue for a much more agreeable price. One that won’t leave a massive dent in your wallet.

Huawei has been playing fast and loose with the recipe book, though – so much so that the P10 Lite isn’t really much like the P10 at all. 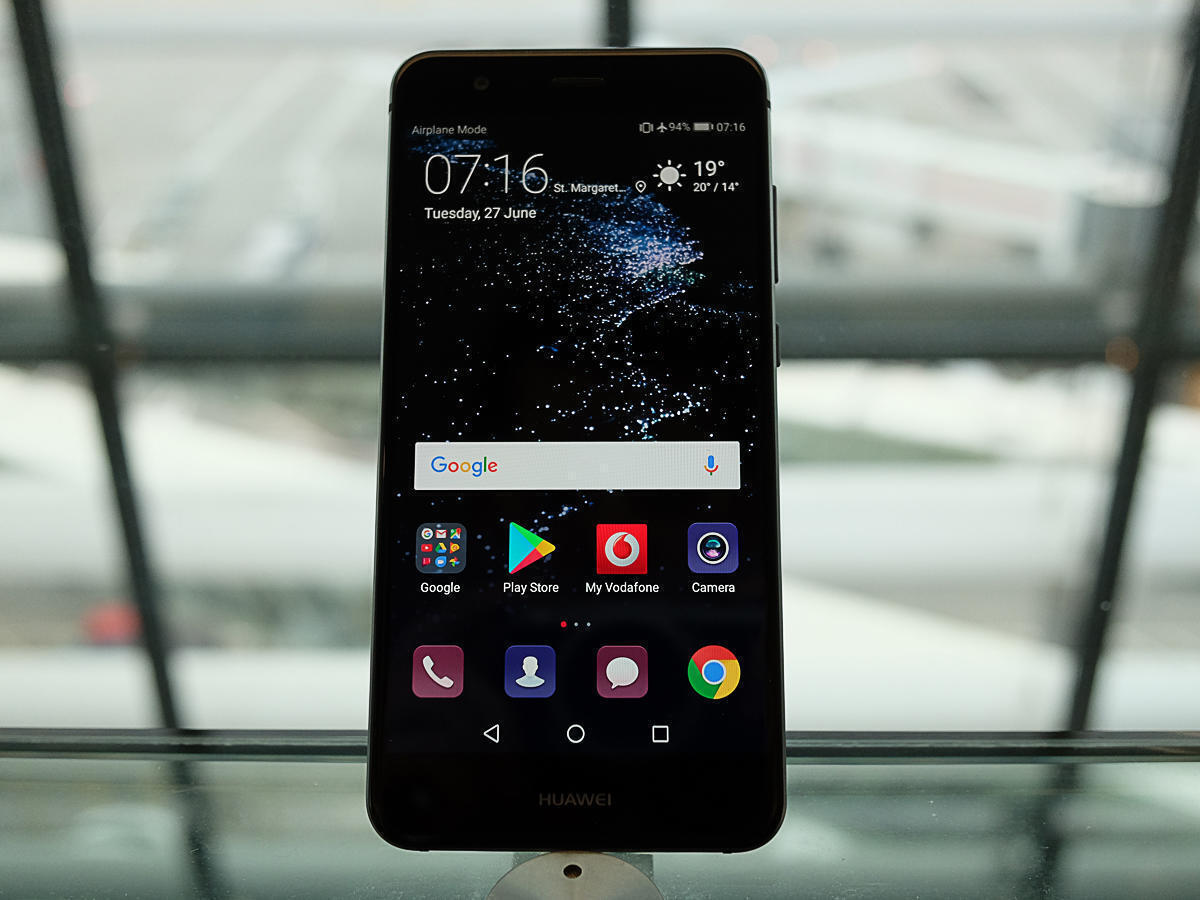 It shares a name with Huawei’s photo-centric flagship, but the Lite is hardly a dead ringer for the P10. It’s got a chunkier metal frame, with contrasting colours that only make it stand out further, even if the curved edges are a welcome touch of class.

Glass and metal are great to see in a mid-range phone, but the all-glass back is unbelievably slippery. Pop the P10 Lite down on anything other than a completely flat surface and it’s all but guaranteed to slide off under its own weight.

You won’t find two cameras around the back, only one, and the fingerprint sensor has been moved back here too. It’s a lot easier to find than the awkwardly-placed sensor on Samsung’s Galaxy S8, but it means there’s no one button navigation like you get on the P10. It’s also ridiculously fast, skipping the lockscreen almost the instant you brush a digit up against it.

The P10 Lite looks every bit the premium phone from a distance, but get closer and you’ll spot the tell-tale signs of a limited budget. MicroUSB charging instead of USB-C? Come on, Huawei – this is 2017. At roughly half the price of the P10, you’d expect Huawei to have made more cuts than an apprentice butcher to bring the Lite in under budget, but the display hasn’t been a victim. Somehow, it’s actually even bigger.

There’s a 5.2in panel here, squeezed into a phone that’s barely any larger than the 5.2in P10. Both have the same 1080p resolution, so display density is slightly reduced here, but not so much that you’d notice without a magnifying glass.

It’s not quite as bright as the P10, but the Lite can still crank up the brightness when the ambient light sensor calls for it. It means you won’t struggle to see what’s onscreen when you step outdoors, unless it’s on the sunniest of sunny days. Fantastic viewing angles help here too.

Contrast is strong, with plenty of depth in darker images, although Huawei’s image processing can give things an overly sharp look which verges on the unnatural.

Colours edge slightly into cool territory out of the box, but a quick trip into the Display settings can pull it back towards neutral. There’s a lot more control here than you’ll get with other mid-rangers, so you can really fine-tune things for your own tastes.

For a sub-R5,000 phone, there’s really nothing to complain about here.

That’s true of the single speaker, too. It’s loud enough, without any nasty distortion when you really crank things up, and sounds clear too. Catching up on YouTube videos won’t have you reaching for a pair of headphones. Seeing how the dual cameras were such a big deal on the P10, it’s almost a disappointment to see the P10 Lite’s single sensor reduced to a bit player. But come on – Huawei had to make some savings somewhere.

You get a 12MP shooter with phase detection autofocus and an f/2.2 lens, which is still pretty respectable for a mid-range phone, but there’s no optical image stabilisation and the tiny 1/1.28in sensor doesn’t let in a whole lot of light.

During the day, that won’t matter: the P10 Lite can take decent photos, with ample detail and defined dynamic range. Colours and contrast are pretty good too, without any real noticeable noise. There is an HDR mode, but it didn’t make a massive impact on a lot of scenes. It doesn’t seem to kick in automatically, either – you’ve got to turn it on manually through the shooting settings screen.

There’s a lack of sharpness around the edges of the frame, but it’s only really noticeable when you zoom in beyond 100% – for the most part you won’t spot it, and cropping into your shots (say for Instagram) removes it altogether.

Once the sun goes down, things aren’t quite so impressive, with grainy snaps that show muted colours and a general lack of detail. Unless you’ve got a steady hand, expect some shaky results. Still, that’s what to expect everywhere else for the same money, so the P10 Lite still puts in a good showing. Huawei has gradually dialled down its Emotion UI Android skin over the past few years, taking it from from an overbearing resource hog to a more streamlined spin on Google’s mobile operating system. EMUI 5.1 is the best version yet – and not just because you can finally add an app drawer to your home screen.

It’s full of handy extras, like motion gestures, a floating dock, and lockscreen shortcuts for tools like the torch, timer and calculator. The redesigned Settings and Notification pages can take a little getting used to, but it’s otherwise as good a UI as Huawei has made to date.

You do have to put up with some truly hateful icons, though. Thankfully there’s a Themes app that’ll let you download some better-looking alternatives in just a few taps.

It’s also worth digging through the pre-installed shovelware and deleting the apps and games you’re never going to use – or at least bury them in a folder. Out of sight, out of mind and all that. EMUI ticks along at a respectable pace, thanks to Huawei’s own Kirin 658 CPU. It’s an octa-core chip, just like the high-end Kirin 960, but runs at a slower speed and uses older silicon – that’ll be where Huawei has kept costs down, then.

It’s hardly a slouch, though, especially with 4GB of RAM backing it up to manage all your multitasking. There’s no obvious lag or slowdown when opening apps, loading games or scrolling through web pages, and EMUI animates smoothly. For the most part.

Gaming isn’t quite a slam dunk, as more demanding titles can send frame rates tumbling unless you tone down the detail settings, but you’ll have no trouble crushing candies or Clashing Royale-y.

Battery life is a similar story – it’s fine in most cases, but push the phone hard with games or apps and you’ll burn through the entire 3000mAh cell in a matter of hours. Stick to streaming video and hours will creep into the double digits, though, and in day-to-day use twelve hours is pretty typical. Not quite enough for a whole day away from home without a top-up, but close.

That microUSB port supports Huawei’s own brand of quick charging, so you can get back up to 50% in about 45 minutes, and up to full again in an hour and a half – even if you’ve got to fiddle with it to get it plugged in the right way. It’s not quite going back to the Dark Ages, but still. The P10 Lite is a great mid-range phone. It’s got the style and build quality of something much more expensive, a top-notch screen and decent performance.

Does it really deserve that P10 branding, though? Probably not – not only does it ditch the things that make Huawei’s best phone stand out, like the dual cameras, but it ostensibly tweaks the design too.

Neither of those changes make it a bad phone. If you’re after something with style, that comes in at half the price of a flagship phone, it’s still a great choice – just be aware that a little extra cash buys you a lot more phone, and the cheaper competition is basically on par when it comes to screen and CPU.