DC’s comic creations regularly end up in second place to Marvel at the cinema box office – but when it comes to games, Batman and his super-powered squad mates consistently annihilate the Avengers.

2013’s crossover classic Injustice: Gods Among Us proved as much, with Batman, Superman, Wonder Woman and an entire rogue’s gallery of series villains coming to blows and finally settling scores fans have been dreaming about for decades.

The sequel doesn’t just return for more of the same: developer Netherrealm has learned a lot from the original, as well as the two Mortal Kombat entries it created either side of it.

The result is a comprehensive fighter that’ll keep newcomers entertained, but adds layers of depth for hardcore fans looking to prove themselves against the online opposition.

Netherrealm is the absolute champ at taking the simple one-on-one fighting game and adapting it around a compelling single-player story – and has been ever since it gave Mortal Kombat a gory reboot in 2011.

Things pick up where the multiverse-hopping Gods Among Us left off, which can be a little confusing for first-timers. The Justice League is still split, Superman is still in prison, and Batman is still the one that put him there. Sounds dark, right?

Well, it’s nowhere nowhere near as gloomy and sinister as the original, even if it stays on the serious side of DC’s comics universe. There’s no Guardians of the Galaxy-style silliness here – even if that sarcastic scamp Green Arrow does his best. The improved character models (and startlingly realistic facial animations) only add to the impact.

The annoying quick-time sequences from the previous game have been ditched in favour of more focus on the actual fighting. It’s a smart move, one that lets you hop between battles, or settle down to watch the cutscenes between each encounter unfold and piece together the story. Each chapter puts the focus on a few heroes or villains, unfolding the story a bit at a time. You either focus on one character, or pick between a pair of warriors for a few fights before moving onto something new.

It’s enough to get a taster of a large portion of the roster, but you’re almost exclusively playing as the heroes here – you’ll need to head to the multiplayer modes to try out some villains instead. There are a lot of overlapping plot points, too, so there’s a lot to get your head around. At least the action-packed cutscenes and fantastic voice acting make it an easier watch than the box office bomb that was Suicide Squad.

And with so many stars all battling for screen time, you’ll need to pay attention. Injustice 2 is overflowing with characters, from every corner of the DC universe. Each major member of the Justice League makes an appearance, of course, but only true fans will recognise the likes of Firestorm, Blue Beetle and Swamp Thing.

The villainous side of the roster isn’t necessarily filled with the characters you’d expect, either. Signature Batman villain Mr Freeze is out, but the similarly chilly Captain Cold does make the cut – as do Gorilla Grodd, Black Adam and Brainiac.

The original game had an even bigger roster by the end of its DLC-extended lifespan, and we’d expect a fair few characters to make the jump to the sequel eventually. Right now, though, there are plenty to pick up, even if you’re an Injustice veteran.

Old favourites do return from the previous game, of course, this time with tweaked moves and abilities that help keep them feeling fresh. Harley Quinn might have lost her bag o’ tricks, but she makes up for it with two attack hyenas you can call out at any time to give your opponent a savaging. These Hero Powers help extend combos, keep you out of danger, or set up on-screen traps for your opponent to avoid, but you don’t need to built up any meter to use them. They constantly refill over time, so you’ll want to use them as often as you can.

There’s still a familiar super bar, of course, and while it’s satisfying to save it all up to land a round-turning attack, it’s useless if you die before you can pull it off.

Sacrificing some on a block escape, roll escape or air escape can help keep you in the fight. These mechanics add some welcome extra depth to the gameplay, letting you escape from the corner when you’re under pressure, or break out once your opponent has you in a long combo.

It’s a system that’s been adapted from Mortal Kombat X, and it works well here. Button-bash your way through the story and you won’t find much use for them, but these moves are invaluable at higher levels of play. When you come up against a Deadshot player that insists on an infuriating long-range zoning game, they are absolutely critical.

Injustice is a combo-heavy game, after all. The inputs might be simpler than Street Fighter’s mess of quarter circles and charge motions, but you’ll still need to memorise them, and get your timing down to stand a chance against real opponents.

Then there’s the Clash system, which forces you and your opponent to second-guess each other, betting a portion (or all) of your meter. Guess right as the defender and you’ll some precious life back; guess right as an attacker and you’ll deal extra damage. Guess wrong, though, and your enemy gets the bonus – and you lose however much meter you committed to the Clash.

Oh, and if all that wasn’t enough to think about, you’ve now got your character’s gear to worry about as well. 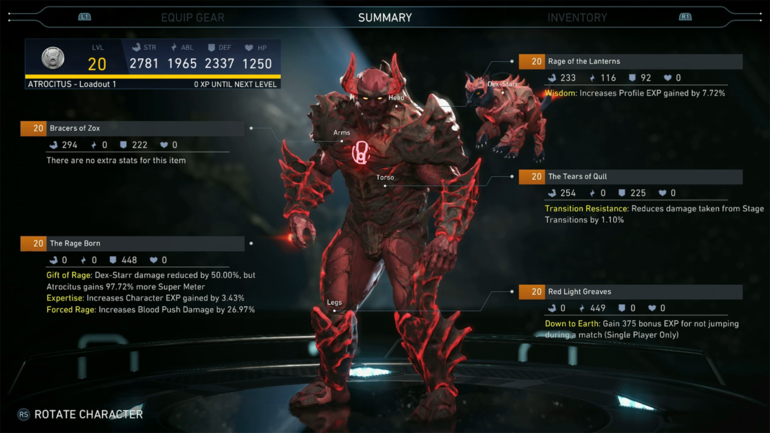 That’s right: pull the wrong pair of pants over your super-tights and you’ll be down on power against a better-equipped rival.

It’s a clever system, really: each randomly-earned loot drop can boost stats like damage dealt, or the amount of health you start each match with. Level up your character and you can use more powerful gear, with even greater effects. Matches earn credits, which can be exchanged for loot crates that add to your collection.

You can’t buy them with real-world money, either – just cosmetic gear if you really want it, so there’s no pay-to-play nonsense going on.

Each piece customises your character’s looks, too, so you’ve effectively got an entire wardrobe of gear to play dress-up with. Once you unlock it all, anyway. Gear drops are entirely random, and you’ll be lucky if a piece drops for your main character, so getting it all can feel like a real slog.

The best add-ons tweak your character’s abilities, mixing things up and giving you new ways to play. It’s a shame these ability modifiers aren’t available in the versus multiplayer mode, as they’re a great way to personalise your play style. Netherrealm proved this can work with Mortal Kombat’s variations, but here they’re of limited use.

You have the option to disable gear stat bonuses completely when you head into the competitive modes, but most players seem happy (at least at launch) to duke it out with them enabled.

It means that if you haven’t spend hours levelling up your character, Tamagotchi-style, so you can equip the best gear, you’re going to have a hard time. Good job there’s somewhere else you can work alongside other players, instead of against them. There’s a never-ending rotation of matches, modifiers and challenges available in the Multiverse mode, which you can tackle by yourself or as a guild with up to 50 other players. One fight might have meteorites randomly striking the arena, another might scatter health power-ups during the fight.

Each one only hangs around for a few hours, and the constant changes mean there’s always something new to try. Even if you never play against another human, there’s enough here that’ll keep you coming back time after time – if only to max out each character and unlock their entire gear list.

You’ll need to climb up the ranks to beat the harder difficulty matches, and sometimes that won’t even matter – you can be forced to use a level one character with no gear against a fully-equipped level 20 enemy. It’s brutal, but oh so satisfying when you beat it. Naturally you’re earning experience and gear unlocks every step of the way, with a constant drip-feed of new stuff to open and equip.

RISING THROUGH THE RANKS True fighting fans will be chomping at the bit to head online and prove their skill, and happily Injustice 2 delivers here, as well. For the most part.

Netplay is exceptionally smooth, with no minor delay or lag stopping you from connecting your combos. When it does go wrong, it goes very wrong, with major hangs and pauses, but these are rare. Reports from early players have been largely positive.

No best of three option is a bit of a downer, especially after Capcom relented and added it post-launch to Street Fighter V. Netherrealm may add it in with a patch later.

The online competition is already heating up, and while there are plenty of Deadshot players grinding out cheap wins with full-screen projectile spamming, the new game mechanics are there to help you adapt and conquer.

You’ll need to master combos to start racking up the wins, but the comprehensive move lists (complete with frame data) help you work out which attacks are safe on block, and which are going to leave you vulnerable to a big punish.

It’s a big improvement over the first Injustice, and the most complete competitive fighter Netherrealm has released to date. This hurts, speaking as Street Fighter fans, but Injustice 2 is the most complete fighting game out there right now.

The single player story is fantastic, focused and makes the most of the beautiful new engine. It’s absolutely bulging with content, whether you want to play solo or try your luck online, and the core game mechanics have been expanded and improved where it matters. Plus it still plays perfectly on a control pad – there’s no need to splash out on an expensive fight stick just to stay competitive.

With a whole roster of new and revamped characters, there’s plenty here for fans and newcomers alike, and the combo-heavy gameplay feels so much slicker than the zoning-focused original.

Whether you’re into DC’s colourful cast of characters or not, Netherrealm has created a fantastic fighter that’s definitely worth your time.