The Nintendo Switch is the newest console to land on the market and a new console needs some new games to go with it. Nintendo are famous for their game quality, as it happens, and The Legend of Zelda: Breath of the Wild was their pick to sell the portable-but-still-home-friendly console to gamers.

So we were expecting awesome right out of the gate. How could we not with the prospect of exploring an open-world Hyrule while controlling series hero Link? Of course, it could’ve all gone horribly wrong with so much riding on Link’s animated shoulders. But it hasn’t. Not by a long shot.

The Story (This Time) So Far You’ve been asleep an awfully long time. Princess Zelda seems to still be about, battling the force of Calamity Ganon which threatens to overwhelm the kingdom of Hyrule, but everyone else you knew is either weird, ancient, or dead. That’s what happens when the Hylian Champion (that’s you) is whomped and stomped in the previous final showdown and has to be put in stasis to heal so he can try again. Breath of the Wild is, basically, your second go at taking down Calamity Ganon.

The trouble is that now you’re weak, unprepared, and an amnesiac. Them’s the breaks when you’re magically healed over a century but there are still a few people who remember you. The Hylians, and other races in Hyrule, are surprisingly long-lived and they have even longer memories. There may or may not be a ghost helping you out in the early going, to boot, so even the dead are being helpful. Good thing too, as there’s a princess to save… or rather, back up. She’s been doing all the work this past century. But first you’re going to need some weapons and armour. Following a tutorial in the game’s Great Plateau, which serves to orient players in the mechanics of combat, stealth, weapons, armour, cooking (barely), potions (even less so), and the various elemental hazards they’ll face, it’s time to set out into the wider world. First, though, you need to complete the challenges in the four Shrines on the Plateau in order to earn the Glider that will save your life on more than one occasion, and prematurely end it at least a few times. Only then can you get off the Plateau and into the game proper.

Once there, players will discover that they inhabit a literal world. There are horses to tame, mountains to climb, people to help, monsters to slay, and locations to explore. The Shrines from the tutorial are dotted all over Hyrule and players will get either an extra Heart (read: Health upgrade) or an extra portion of Stamina for every four Shrines completed. And there are a lot of Shrines, which range from simple logic puzzles to Guardian (ancient death-dealing machines with lasers) face-offs to more fiendish puzzles.

It’s going to take a lot of time to get to each and every one. Or you could, you know, venture to the Castle and attempt to assist Princess Zelda with your starting equipment. Breath of the Wild will indulge that insanity, as well as some leisurely exploring. You don’t stay with your starting gear for long, though. Weapons are plentiful, armour is less so (though there are extra options available by connecting the correct Amiibo — you have been collecting them, right?) but weapons, bows, and shields are breakable. Very breakable, in the early going, to the point where players might encounter an encampment of Bokoblins, crunch through every weapon they possess and still not kill everything. At that point, it’s time to run. And you’ll do a lot of running in the early game, from Moblins and the Talus, and the Hinox, and goats. Seriously, avoid the goats if you’re near a cliff…

Later weapons are more durable, coming with a range of special elemental effects and with additional attack damage or durability. There is the Master Sword, of course, the only unbreakable weapon in the game and the best thing for taking down Guardians but that’ll more than take some earning. Armour can be bought everywhere there are people settled (and occasionally found in chests and as quest rewards) but upgrading it comprises a massive chunk of gameplay in itself. We’ll let you discover (or Google) how to do that.

If you are going Shrine-hunting (or monster-hunting), then you won’t rely on weapons alone. Link carries something called the Sheikah Slate, an ancient artefact that hosts your map, camera, inventory, quest info, and Compendium. It also tallies which abilities you have. Link gains the ability to throw two kinds of bomb, use the power of magnetism, stop time, or create a mini tower of ice on the surface of water. The possibilities these skills afford our hero are nearly endless. Stop time for a boulder, whack it a few times, and watch it fly into a crowd of enemies (or levitate a metal box over monsters) for some fun times. Plus, Shrines often rely on innovative use of Link’s special skills, so you might want to dust off your imagination.

You Took Your Sweet Time Getting Here The point is to get strong enough to take on Ganon. Along the way, you’ll explore the huge world that Nintendo has provided. Shrines act as Fast Travel points (so there’s incentive to complete them for that reason alone) and each new region on the map, which begins greyed out, is revealed by climbing a central power and activating it. These climbs are sometimes challenges in themselves, with our worst encounter being with a field of stationary Guardians zapping us off the tower like the bug we are.

It’s a bit like The Witcher III: The Wild Hunt in that there’s a distraction everywhere you look, so actually getting to Zelda’s side and taking on Ganon has to wait until you’ve completed side quests galore, finished up freeing the Divine Beasts — giant machines meant to protect against Ganon — from Ganon’s control, upgraded your chosen armour set (Ancient Gear takes… so… long…) and found the Master Sword. You could take a shortcut and attack Ganon with some twigs and hope in your eyes, but you’ll probably do some exploring first. Possibly enough that Zelda’s got to be thinking “Where the hell has the Champion gotten off to now?” 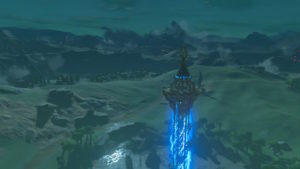 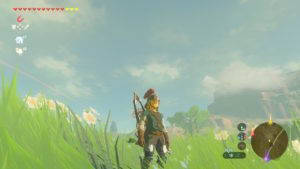 You’re going to be too busy looking for the next Korok seed (needed for inventory upgrades), Shrine, Bokoblin camp, or other interesting landmark to fully appreciate just how much effort Nintendo has put into the design of Hyrule. Each place you see is unique and somehow designed to attract your attention. There are endless distractions to be had and there are many things to discover. So many that Breath of the Wild was still throwing up new surprises more than 40 hours in (yes, it’s possible to be very distracted).

If you do slow down and pay attention, you’ll notice just how beautiful the game really is. The scenery is lush, the vistas are lavish, and the sound has been fine-tuned so well that you’ll barely notice how sound effects give way to light music when in the presence of a new discovery or populated area. Your heart will definitely notice how the music tunes up to a far larger score as you come face-to-face with yet another foe. Only, by about 10 hours in, you’re no longer running from them. You’re getting ready to drop-kick them off a cliff. We’ve been gushing. Have we been gushing? It doesn’t matter, because it’s all true. The Legend of Zelda: Breath of the Wild is, perhaps, the best Zelda ever made. It’s certainly one of the best open-world games that you’re going to encounter in 2017. The world is gorgeous to behold, populated by animals that gambol around the countryside until you decide they’d look better in a cooking pot and put an arrow through them.

There are also various monsters, which scale as your health and gear improve, and the detail in the main quest as well as the charming little side-quests only serves to make the already-impressive open world an even bigger joy to explore. We’d get a Switch just for this game, and even if you need a little more convincing, this had better be in the bag when you eventually switch to a Switch. It may well prove the game that defines the console when we’re looking back on it in a decade’s time.