Samsung just can’t keep a lid on their products, a fact of life that we’re still not certain isn’t intentional. The Galaxy S8, and the expected Galaxy S8+, is supposed to be getting its official reveal at the New York Unpacked event, so it makes sense that we’re now seeing more leaks than ever.

Leaks like the fresh batch of images depicting a Verizon Galaxy S8+, both in the packaging and out of it. Allegedly, anyway. 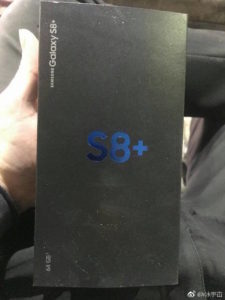 If the leaked images are real (and there’s no reason to expect that they’re not, because the handset’s lines line up with previous leaks) then the packaging either features a misprint or Samsung’s doing something strange with the charging cable. The back of the box makes mention of a micro USB cable and we’re pretty certain that it’s going to be charged via a USB-C port. Perhaps an adaptor will be present, as SamMobile points out.

In case you were doubting the veracity of the images, the Galaxy S8 has also appeared in video form of late. It’s not a very long clip, clocking in at a mere 9 seconds, but it’s a mighty clear look at Samsung’s newest effort before we see it on a New York stage. And, even in a sub-10 second video, it looks mighty fine.

Now we can barely wait to get our mitts on that fingerprint-collecting surface so we can see what the phone can actually do. All things in good time, though. We do need something to do next week, after all.