It was a slight shock to learn that we were going to be missing out on the Galaxy S8 and getting a tablet instead, likely the Galaxy Tab S3, at this year’s Mobile World Congress. Now that the shock has worn off, we’ve been keeping our eyes peeled for more on Samsung’s first decent Android tablet release in a while. Right now? We’ve got a pretty good idea what it looks like. Because we’ve seen it.

And if you look below you’ll see it too. Samsung’s newest tablet has showed its face in photographed form during regulatory approval at Taiwan’s NCC (National Communication Propagation Committee) ahead of the official announcement. 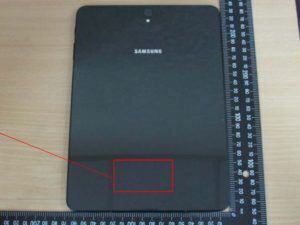 The images aren’t the usual high-gloss (or incredibly grainy) shots we see when devices leak but that doesn’t mean that we don’t get a good long look at the Galaxy Tab S3. Both the front and rear are visible, helpfully measured, showing off the metal-and-glass build. It bears more than a passing resemblance to Samsung’s most recent handsets, so obviously the company has grown fond of the style they resisted for so long.

We’ve already got a solid idea what Samsung is going to be packing into the 9.7in tablet. A 2,048 x 1,536 resolution, Snapdragon 820 CPU, 4GB of RAM, up to 64GB of storage, 12MP rear camera, USB C, a headphone jack (yay, both), and Android Nougat are the basic specs we’re expecting. Samsung’s also going to be bringing out 4G and WiFi-only models.

Though we’ve had a brief look at the design now, we don’t have to wait all that long for an official gander. Samsung’s MWC 2017 event takes place on 26 February, just prior to the Barcelona gathering takes place. We’ll be there, so stay tuned.