Not all mice are created equal. We’re sure that’s true of flesh and blood rodents too but we’re talking here about the SteelSeries Rival 500 — the kind of computer mouse you need if you’re going to be tanking some serious damage on a raid with the rest of your guild. Unless you’re a long-suffering healer, in which case you definitely need all the buttons (and infinite bloody patience, as the tank runs off again and nobody’s kiting properly).

For everyone else, the Rival 500 might just be overkill. And while we’ve always said that there’s no kill quite like overkill, there is a limit to how many buttons the average computer needs at their disposal. Fifteen… is probably too many. Like all our peripherals, what we look for in a computer mouse is weight and durability. Some of us have the uncanny ability to melt plastic through everyday use, so a human interface device needs to be able to withstand that.

The Rival 500’s construction is able to do that, and more. The 500 is solid under the palm, with no give except where you’re expecting it to be — under the buttons. The textured grips on either side of the mouse keep your hands in place even during the most nerve-wracking of gaming situations and the matte finish also helps to keep your mitt stable while in motion.

The 500 might be a tad wide for some users, though. If you’ve got small grabbers you may battle to reach all the bits, so we’d recommend testing out the mouse before purchase if you’re even slightly concerned. It’s also a plan to test the mouse if you’re a leftie but it’s almost a certainly that you’ll discard the Rival 500 in favour of something more explicitly ambidextrous. Unless you Southpaws are used to gaming with a mouse in your right hand, the button configuration and thumb-rest are going to be on the wrong side. No, there’s no way to change that.

For the rest of the world, though, that’s not going to be a problem. Just you, a solidly-built computer mouse and about 15 buttons. Yes, really. No, you don’t need to use all of them. Yes, you probably will want to. Seriously though…

There are fifteen buttons. There are the two standard options, the scroll wheel (which clicks), two additional options under the left finger and a single large on under the right. There’s another almost under the palm which controls the Rival’s CPI setting.

Then there is another collection of buttons on the left, where your thumb will rest. There are three keys in an arc, as well as another two disguised as part of the textured grip (which you can nail with the front and ball of your thumb). Finally there are two more buttons which scoop out right under the thumb. These two can be disabled by way of a switch underneath the mouse, as they are prone to being whacked while you’re moving the onscreen pointer. Never pleasant when you unleash your Ult in Overwatch prematurely. 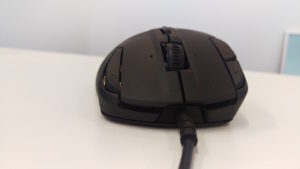 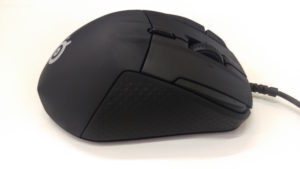 There is more to the Rival 500 than just the abundance of buttons. Thanks to the SteelSeries Engine 3 software you can assign a function to each button (with profiles set up for specific games — a lot of initial legwork but worth the effort), change the DPI, and also completely customise the Rival’s lighting. Because you’ve got to match your mouse and keyboard’s lighting or people won’t think you’re cool.

There’s one other thing that the Engine 3 software does for the Rival 500. Users can program actual tactile feedback to each button, letting you have a console controller-like experience while you game. Handy for learning the various keys by little you have a specific buzz or vibration every time you perform Action X or Y, though your mileage may vary.

At the end of the day, though, you’re going to get out of the Rival and its software what you put in to it. If you need all the buttons and take the time to learn how they all respond, you’re in for a great time. If you buy it and just expect it to work… less of a great time is in store. If you’re the type to take the Rival 500 for a spin then you’re going to be putting your own spin on it. It excels at gaming where you need to issue varied commands in quick succession, so twitch-shooter gamers (looking at you, Call of Duty) probably need not apply unless they like the wide-body feel and the Rival’s weight. If you’re playing an RTS, an MMO, or anything else that has a varied command-list, the Rival 500 is worth your time and money. All R1,700 of your money.