What you need to know about the Nintendo Switch Last October we got confirmation from Nintendo that its portable/console gaming machine the Switch would be coming to market, having endured more than a year of teasers and hints, all of which were pretty light on details. Now we’ve got most of the important ones, like when we can get our mitts on it, what it’ll cost, how it’ll actually work and which titles we can expect at launch. These are the salient points:

The Switch will land in Europe, the US, Japan, Hong Kong and some other spots on 3 March. Will we see it in South Africa at the same time? We certainly hope so. Frequent travelers will be pleased to hear Switch games won’t be region-locked, so you can pick them up anywhere in the world.

It’s not going to be cheap

Even though the Switch is being touted as a cheaper rival to the two big name consoles, it’s not really likely to be that much cheaper, especially in SA. It’ll cost $300 in the US, which is around R4,000 at the current rate, but means it’ll likely cost R5,000 or more once customs and importers have added their pound of flesh. The package will include the Switch handheld itself, the two Joy-Con controller nubs (and the Joy-Con Grip that slots between them to make a traditional gamepad), two Joy-Con wrist straps, the home dock for connecting to your TV, and an HDMI cable and AC adaptor. You’ll be able to choose between kits with two grey Joy-Cons, or one with one blue and one red Joy-Con. Extras will, of course, cost extra, and that could add up fast.

Some of the teasers skirted the issue of whether or not the display would be touch sensitive, but now we know, the 6.2in 720p screen will support touch. Even though that’s a tad low in the era of HD and 2K-display touting smartphones at least the console will output 1080p gameplay to a connected TV.

Online is pay to play

Boo, hiss, etc. If you want to play online there’ll be a monthly fee for the pleasure. We don’t yet know how much you’ll need to pay, but to get you hooked the service will be free until September. One consolation, though, paid users will get a free game download each month, and the SNES games now include online play features. Battery life could be iffy

According to Ninty’s estimates, the built-in battery will allow for between 2.5 and 6 hours of play… depending just how demanding the game is. Whenever we see those sorts of estimates we find it prudent to err on the low-end where our expectations are concerned. And Nintendo seems to agree with us. It says The Legend of Zelda: Breath of the Wild should get about three hours on a full charge.

So you’re going to need an external battery pack – and thankfully Nintendo’s opted for USB-C ports, which means it should be easy enough to repurpose a phone booster or similar.

The Joy-Cons should be joyous

They might be dainty looking, but the detachable Joy-Con controllers are chock-full of functionality. Each has an accelerometer and gyroscope and a full array of buttons, you two players can duke it out on the run. One also includes an infrared camera that can recognise hand gestures (like rock, paper, or scissors) and measure proximity. The right Joy-Con, meanwhile, comes with a built-in NFC sensor, which means Amiibo smart toys will still be compatible. Oh, and the left one has a Capture button for screenshots at launch, and video grabs down the line. Both have “HD Rumble” capabilities, which Nintendo says ought to provide incredibly sensitive force feedback. Plays well with (up to seven) others

Wanna host a Switch party? Up to seven of your Switch-owning buddies can bring their consoles over and the eight of you can wirelessly connect them for LAN-like play. That’s going to be particularly well suited to Splatoon 2 with its 4-a-side Turf War paint-blasting skirmishes. That’s also the title Nintendo’s expected to try and turn into its first eSports sensation thanks to Wi-Fi capabilities for online action.

Eventually, Switch players will be able to choose from titles like Super Mario Odyssey, Mario Kart 8 Deluxe, Splatoon 2, Xenoblade 2, Fire Emblem Warriors, and third-party offerings like FIFA and No More Heroes. But the only games confirmed to coincide with the launch date are The Legend of Zelda: Breath of the Wild and 1-2 Switch… though we’d be surprised if the list doesn’t grow substantially before March rolls around. We’ll keep you posted. 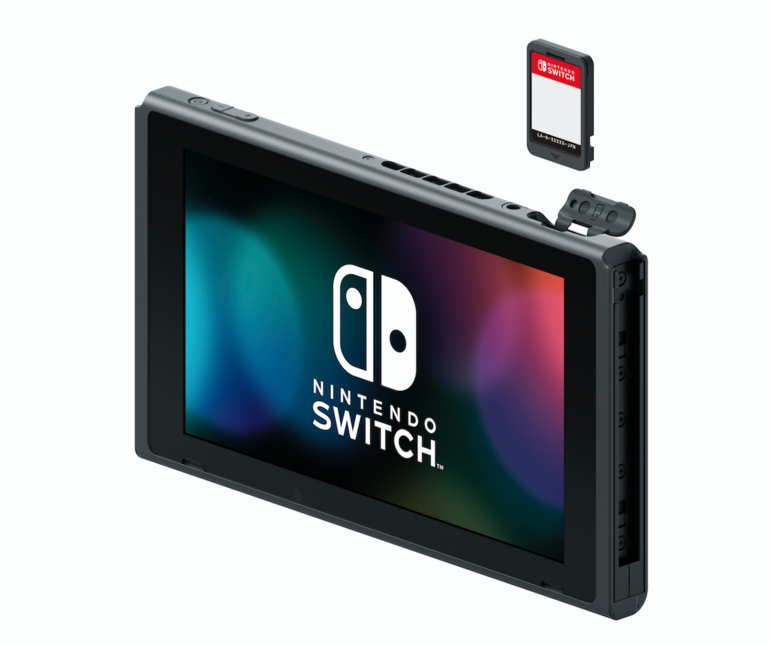