As you no doubt know by now, Samsung’s pulled the plug on its Note 7 phablet after the exploding battery debacle affected not just the original devices, but the purportedly fixed second batch, too. If, however, you’ve still got one you picked up abroad — the device never went on sale in SA officially — you can now swap it for a Galaxy S7 Edge at OR Tambo, Cape Town and King Shaka international airports. And best you do, because you won’t be allowed on a plane with one. 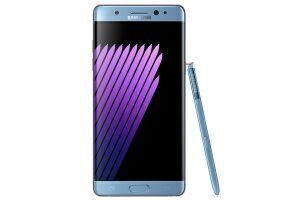 “Our number one concern is the safety of our customers and we are supporting the global recall of the Galaxy Note 7,” says Craige Fleischer, director of integrated mobility at Samsung South Africa. “It is a priority for us to collect the affected devices from owners and replace them with a Galaxy S7 Edge smartphone or a full refund.”

Samsung’s set up exchange kiosks at South Africa’s three biggest airports, and says customers with Note 7 devices can also exchange them at any Samsung Service Centre countrywide or, if you’re in an outlying area and can’t get to an airport or a service centre, you can call 086 072 6786.

Early reviews of the Note 7 raved about its slick design, ergonomics and software, so we were really looking forward to spending some time with one — particularly as its predecessor the Note 5 (Samsung skipped the 6 for the sake of naming parity, something that’s now come back to bite it as some consumers erroneously assume any Samsung with a 7 in the name may have the propensity to ignite) was one of our favourite Android devices of recent years.

Like you, dear reader, we’re going to have to wait and see what the Note 8 (or whatever it ends up being called) has to offer. You can bet the quality control and stress tests will be unprecedented stringent, because while the Note 7 recall isn’t going to tax Samsung’s very deep pockets enough to put it in any real danger, it can’t afford the reputation damage that would come from another misstep.

While we wait, we’re hoping Google (or an enterprising third party) will see fit to bring the Google Pixel devices to South Africa. What can we say, we’re glass-half-full kinda folk.