It’s been a long time coming, and there have been some stalls along the way, but GoPro has finally revealed their own branded drone. Introducing Karma: a foldable quadcopter that fits perfectly into its little backpack, ready to be flown wherever you may go.

Why did GoPro do this? Well, other consumer drones on the market have been making extensive use of the company’s action cameras. It’d almost be silly not to enter the drone market and compete with the likes of DJI, Parrot, and Yuneec. But that means that GoPro has to stand out.

What makes the GoPro drone different from the competition? Besides the fact that it’s a drone made by GoPro, Karma features interchangeable rotors. It can be folded down and the the rotors tucked away so that it fits in the stylish carrying case. GoPro has a thing for looking good and their drone is packaged in such an attractive way… Oh, and it’ll fit in a backpack. That’s… about… it? 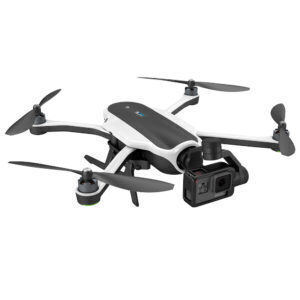 An awesome accessory with the Karma is the 3-axis gimbal you can detach from the drone and connect to the included handheld steady grip — called the Karma Grip — for smooth and fluid filming. GoPro doesn’t go in for hugely creative names, in case you haven’t noticed. It can be used as a handheld steady-cam or clipped to your person as you go screaming down a mountainside. Your insurance company should love it.

Those looking to own a GoPro drone will need to fork out $800 (R10,870) for Karma, and it works with all the existing GoPro accessories. Unfortunately we don’t know local prices just yet. And don’t forget, you’ll need a GoPro camera to attach to Karma if you’re want to not only annoy the neighbours’ pets, but record it for posterity.

So when can loyal GoPro users expect to get their hands on Karma in South Africa? We’re hoping to see it in the air in time for the festive season.