Do we really need another messaging app? Google thinks so, and it doesn’t think its existing Hangouts app is the way to go. Instead, it’s created Google Allo, an instant messaging service that includes all the features you’d expect from a messaging app and one big one you wouldn’t: integrated Google Assistant (which is a bot with features of Google Search and Now). In other words, in addition to sending friends pictures or video, location info, or cutesy stickers, you can harness the power of Google’s search chops and contextual sensitivity straight from your messages.

First announced at Google’s I/O developer conference in May alongside video-calling app, Google Duo (which we tried out when it was released last month), Allo is available for free for Android and iOS phones. Like Duo, Allo requires an active phone number for setup to which an activation code will be sent, so if you’re planning to use it abroad without roaming you’ll need to get it up and running before you depart.

Also like Duo, Allo won’t work on multiple devices and doesn’t offer a desktop or browser version. That’s a potentially massive impediment to uptake, especially when you consider the multi-platform support rival services like iMessage, Facebook Messenger, WhatsApp, Telegram and WeChat offer. And uptake is ultimately the biggest challenge Allo and Duo face — it doesn’t matter how easy they are to use or which nifty features they include, if your friends and family aren’t using them, you won’t either. But back to the features. We’ve been playing with Allo for the last week or so, and on the core features front it ticks all the requisite boxes. Open the app, put in your phone number, let it validate via an SMS code and you’re good to go. Tap the new message icon at the bottom right of the screen and you’ll get three options: “Start group chat”, “Start incognito chat”, and “Google Assistant”. Beneath that you’ll have a list of the contact who have Allo installed, followed by the rest of the contacts in your phone with an option to invite them (which will send them an SMS with a link to download the app).

Start a chat with a contact and you’ll get a text-input bar at the bottom of the screen. On the left is a plus symbol that lets you send your location, attach media or choose from the preinstalled sticker packs (or download additional ones). Choose to insert an image and you can annotate it with scribbles or text, and when inserting emoji you can adjust the size of them by dragging up or down on the send button (the one that looks like a paper plane). To the right of the input bar you’ll find a smiley face that opens the emoji keyboard and a microphone that you press and hold to record a voice note. So far, so standard.

But type in something Google thinks it’ll be able to help with, like a suggestion to get a bite to eat, or a query about the weather, and Google Assistant jumps in to help. For example, mention the weather and Google Assistant will offer you a forecast, along with follow-up suggestions, like a forecast for the rest of the week, or the weekend. You can scroll left to right through the options, and Google offers a thumbs up and down at the end of the suggestion list in case you feel like telling it how it’s doing with its predictions. 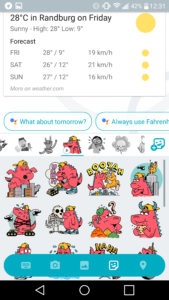 Web search and other suggestions aside, Allo also suggests sentences in conversations. So if someone asks “How are you?”, Assistant will offer recommended responses. These should get better the more you use the service, and the more familiar it gets with your conversational style. But that also means that (unless you’ve chosen an incognito conversation) your messages will be stored on — and analysed by — Google’s servers, which might seem a tad unsettling, but is no more unsettling that the things it already knows about you if you use Gmail, Google Maps or good old Google Search. Google promises all info is encrypted, and incognito messages are encrypted end-to-end and previews of their contents don’t appear in your lock-screen notifications or your message list.

If you like, you can also invoke the Assistant by typing @google in any conversation, or by choosing the Assistant from your list of conversations and typing queries there. In addition to web queries, you can ask Google to entertain you with jokes or poems, play trivia games right in Allo, look up travel info from your Gmail, find out sports scores, set timers or alarms or check the news.

It’s a bit strange at first having Google in your conversations (and similarly strange having a one-on-one conversation with it), but it’s also really handy when planning something with friends that requires information from the web, like a restaurant’s address, contact number or other details.

Features like the built-in translation (that lets you input text or take pictures of text you want translated) have the potential to be incredibly useful, but as with everything else about Allo, that depends on whether or not we actually make the app part of our digital lives. With no desktop client and a slew of other messaging options we’re not yet convinced having an AI in our conversations is enough motivation to move our conversations away from the services we already use, never mind enough to make us hound the people we want to chat to in it to install it.

We’ll have to wait and see whether Allo becomes a default app on future Android devices, and whether or not users take to it in sufficient numbers to prevent it landing in a Google graveyard. For now, Allo’s a curiosity. If it’s to have any longevity it’s going to have to convince us — and you — it’s better than what we’ve already got, and this first iteration doesn’t quite manage that.