Come get some! In about four days and fourteen hours, that is. Duke Nukem, a video game relic from an older time and holder of the all-time “It’s Not Vapourware” record, is set to turn 20 a little later this week. So, of course, there’s a party or something planned, with a countdown clock on the website being timed for what looks like Gearbox Software’s PAX West panel on 2 September..

Speculation abounds as to what might be on for Duke Nukem’s anniversary. A remastered or updated version of Duke Nukem Forever, the title that gamers waited… well… forever to play and weren’t impressed with once they saw it, is one rumour. A wholly-new Duke Nukem game is another rumour making the rounds, but there’s little concrete evidence to back this up.

The ‘King’ (as in ‘Hail to the…’) has taken to Twitter to stir up memories of the past, in between giving Gearbox Software’s Randy Pitchford grief. It’s the constant harping on about past glories that makes the final rumour seem the most likely — that we’re about to see an anniversary edition of Duke Nukem’s most famous game.

A batch of screenshots, claimed to be part of a press pack to be released later this week, has surfaced online. The shots (some of which are below) show some well-lit environments familiar to anyone who has run out of gum since about 1996. This is supposedly Duke Nukem 3D: World Tour, rumoured to be the big reveal taking place in about four days. If true, this is a remastered version of Duke Nukem’s best-known outing with some added extra content.

All of this sure seems like a lot of effort for an update or a remake, though. Perhaps a remaster and a new game? Is the world ready for that? We’ll see later this week. 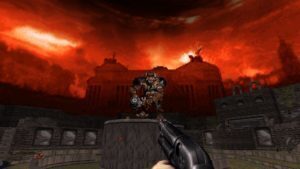