The Galaxy Note 7 is here. It’s big, it’s beautiful, and it’s going to be bloody expensive.

We’ve already spent some time with it and some of us think it could be the best phone in the world. Whatever side of the fence you lie on, there’s no denying it’s making waves.

Having spent a bit more time with it at Samsung’s launch event, we’ve come up with a list of things we love and dislike about Samsung’s latest superphone.

1) IT’S GOT AN AMAZING SCREEN The Galaxy S7 Edge’s screen is superb. Its 2K resolution and AMOLED panel result in a super-sharp display with punchy colours and deep blacks, while its curved edges give it a certain je ne sais quois.

The Note 7 takes this incredible screen, and bumps it up to 5.7 glorious inches of viewable real estate, making it ideal for movies, gaming, and browsing. What’s not to love?

2) IT’S GOT A REALLY CLEVER STICK Well, a stylus. Well, an S Pen, if you want to get really specific. This little wand is what sets the Note 7 apart from every other flagship smartphone in the universe, letting you draw, doodle and scribble notes in an instant.

Apart from the fact that it’s more accurate than ever, it’ll let you translate words on websites (or even from photos), create GIFs from YouTube, and it’ll even work underwater. Speaking of which…. 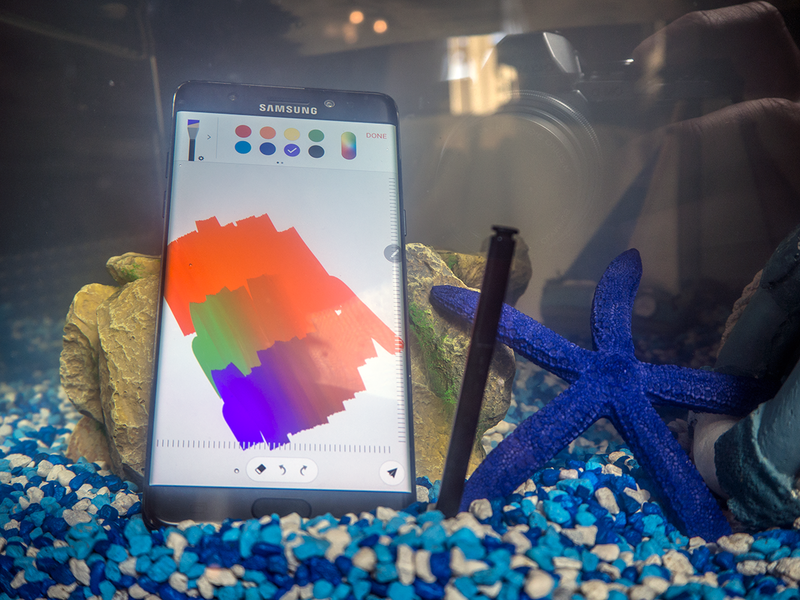 Yep, like its Galaxy S7 and S7 Edge siblings, the Galaxy Note 7 is IP68-rated, which means it’ll survive full immersion in sinks, baths, toilets and rain.

The S Pen shrugs off water with ease too, which means you can doodle in the bathtub too, though we’re not sure why you ever would. Still, who knows when inspiration will strike.

4) IT’S GOT HEAPS OF STORAGE SPACE The Note 7 lands with 64GB of in-built memory, which should be plenty for most people. If you’re a media hoarder though, then you can up the ante by slotting in a microSD card, which Samsung thankfully decided to include.

Cards up with up to 256GB of memory are supported, so it’s safe to say that storage space will never be an issue. Sorted.

5) IT’S GOT THE SAME CAMERA AS THE GALAXY S7

Super-fast autofocus, clear shots, and Optical Image Stabilisation (OIS) for improved performance in dim conditions all make for one of the best – if not the best – cameras currently available on any smartphone. Not too shabby. Samsung’s Android skin and customisation bonanza – more commonly known as TouchWiz – returns. While it’s far, far better than the colourful, laggy abomination it used to be way back in the early days of Android, we still prefer the cleaner, simpler, less bloated wares of stock Android.

Still, at least you can download your own launcher to make your Note 7 your own. Yes, the Note 7 has an iris scanner, and yes, it works. It’s snappy, it’s fast to set up, and generally gives you something to brag about when you’re playing ‘who has the best phone’ when you’re sinking a few beers at the pub.

The trouble is, you have to awkwardly hold it up in front of your face for it to work. While it’s fast, it’s just an unnatural movement for most people, and the fingerprint scanner is still probably the best way to go, judging from what we’ve seen so far. The Note’s innards are as powerful as ever, matching the Galaxy S7 in both processing power and RAM, but we’re a little disappointed by the 3500mAh battery.

That’s actually smaller than the 3600mAh battery found in the Galaxy S7 Edge – and that has a smaller 5.5in screen to boot. Let’s hope Samsung’s improved its software optimisation, eh? Pricing hasn’t been announced for the South African market but we’re expecting that to happen any time soon. We’re also expecting a price in excess of R15,000 for the device if you’re going contract-free, with a similarly hefty monthly payment if you like your handsets to come with strings attached.

You get what you pay for, we suppose, but our wallets still have every right to be unhappy…