We’ll probably see iOS 10 release alongside the iPhone 7 in September, but why wait? Apple has officially released the public beta, which means anyone can grab it today.

Before you load up on it though, there are some compelling reasons to hold off. It’s pre-release software, which means it isn’t as fast, polished, or bug-free as the final 10.0 version will be, nor is it entirely feature-complete. Putting it on your primary device is a risk since it could crash hard at any point.

But we haven’t had any massive issues so far, and better yet, there are strong reasons to sign up now and join the wave of the future: iOS 10 brings a nice stack of upgrades throughout the OS, and makes your iPhone (and to a lesser extent, iPad) feel refreshed and more functional.

Weighing your options? Here’s our first take on the iOS 10 public beta. You’ll notice one of iOS 10’s big upgrades the first time you pick up your device post-install: the screen comes on as soon as the phone is raised. From there, you’ll see the lock screen – which itself has some new surprises in store.

Richer notifications come in individual bubbles on the lock screen, and you can tap or 3D Touch them to, say, respond to a message or check out a video or photo right then and there. You can also grab an update on your Uber ride, for example, or get more info from a notification. It’s a nice showcase for 3D Touch, that’s for sure.

Swipe to the left, meanwhile, and you’ll pull up a listing of widgets (formerly found in Notification Center) that gives you easy access to helpful info and data without unlocking your device. A couple of widgets stopped showing after the first day of using the iOS 10 beta, but hey, that’s unfinished software for you. Swiping right from the main screen, on the other hand, brings up the camera.

With those added swiping functions, the classic “Slide to unlock” command is gone. And since the screen wakes up when you raise the phone, now you’ll need to actually press in the home button – even with Touch ID scanning your fingerprint – to reach your home screen. It’s a fundamental shift that is so far still throwing us off, following years of doing it the old way, but surely it’ll all click with further use.

We’re a little worried about the battery hit for the raise to wake functionality, especially since we tend to have brightness nearly maxed out, but we haven’t been able to get a good sense of added battery drain thanks to excessive Pokémon Go play making us charge every few hours anyway. Sorry. Of all the Apple apps to get an overhaul in iOS 10, iMessage sees the biggest boost of them all – it adds not only functionality but also flash, and the results are delightful.

We love the optional screen-filling visual effects that you can attach to any message, such as fireworks or balloons, and they’re contextual too: if someone sends you a “Happy Birthday” text, you’ll automatically get balloons onscreen when you open up the app. These bits only work if both users have iOS 10, of course, so they’re of minimal use in the beta for most people.

Other additions make iMessage a much livelier and more colourful place to chat. Emoji sizes are amplified onscreen, plus you can turn the phone sideways to sketch or put in a handwritten message, or toss in Digital Touch doodles and animations (like on the Apple Watch). Messages is more useful, too, thanks to an in-frame image/video browser and even camera functionality, letting you shoot a quick snapshot without leaving the conversation. There’s also an iMessage App Store that lets you install sticker packs, such as Classic Mac imagery and other pop culture options.

And the smarter predictive keyboard will now suggest emoji, too, making it easier than ever to find the goofy smiley or other tiny item you’re looking for. All told, Messages quickly goes from being serviceable to downright fun in iOS 10, and it’s a welcome upgrade. Apple Music launched just over a year ago, and while it’s racked up millions of subscribers and delivered some unique perks – namely Beats 1 and some nice exclusive releases – the actual experience of using the app is often frustrating and confusing.

iOS 10 fixes that to a large degree, based on what we’ve used so far. It’s an update that cleans and simplifies while also offering some visual pop. Your library becomes the go-to destination and is easier to browse, while the new For You page is chock-full of recommendations, not to mention quick access to recently-heard music. Unfortunately, that page’s cornerstone feature isn’t yet in the beta: the promised Discovery Mix, which will offer a daily selection of curated tracks that fit your tastes. It’s a direct shot at Spotify’s vaunted weekly playlist, but we haven’t had a chance to try it out yet.

Otherwise, the new Apple Music makes a stronger first impression. Bolder styling and easier access to your music – and the music you might like – make it a much better option the second time around. Will it make you ditch Spotify? Maybe… but let’s hear the Discovery Mix first. 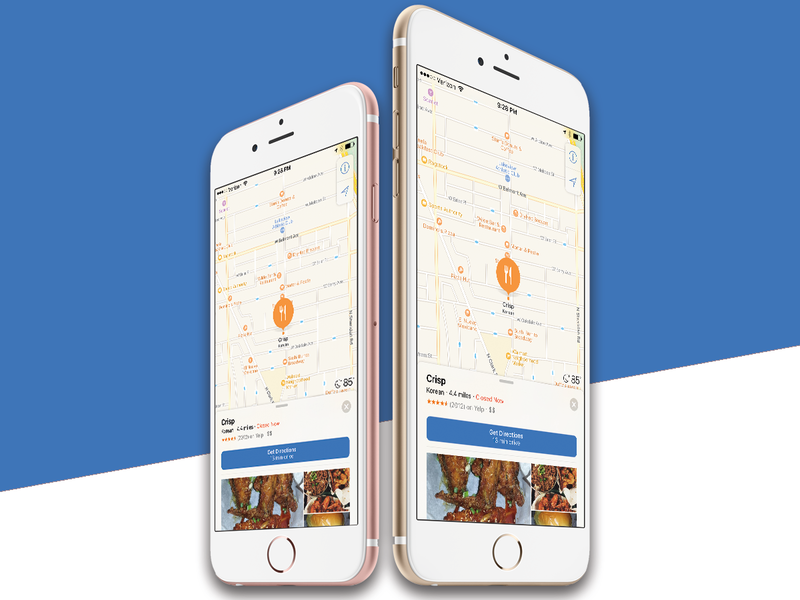 Apple’s iOS Maps app has been largely competent for a long while now, but it still can’t shake the impression of that wretched start from a few years back. Maybe an overhaul will do the trick, though.

Like Apple Music, Maps has a fresh look. Here, the largest emphasis is put right on the map itself, with the interface minimised and kept largely out of sight when not needed. In fact, you might just see a search bar asking, “Where do you want to go?” Tap that and you’ll get a more colourful screen with suggestions and recent searches in big, bold lettering.

It’s smarter, too, with Yelp content plastered into restaurant and store listings and available at a glance, plus you’ll get the ability to place table reservations and book Uber rides in the final release (YMMV in SA). Even the turn-by-turn directions get a nice upgrade with traffic levels, alternate route options, and other feature boosts that can be very meaningful in a pinch. The handiest trick we saw was the ability to search while in the middle of navigation, letting you tap the bottom bar and quickly find nearby restaurants, gas stations, and other places of interest. That makes it easy to locate places to stop off when on a long road trip, for example, and it even shows you how many minutes each deviation would add to your journey.

Google Maps remains the gold standard, but if you prefer to use default Apple apps on your iPhone, then at least Maps seems like a much stronger contender this time around. My hands-on was promising, but we’ll see how well it truly performs over weeks and months of use ahead. Even Photos sees some enhancements for iOS 10, bringing in the kind of braininess that transformed Google Photos last year. It uses machine learning to recognise faces and sort them into categories, as well as spot items and let you search for things like “pizza” or “Christmas” to find old snapshots.

And the Memories tab is super charming, collecting photos from certain days or spans of time and serving them up, also creating effective short films comprised of still photos and video clips. The results can be surprisingly strong in spots, although it’s not perfect: we probably wouldn’t have put the footage we shot of an arcade game in between the cute family moments.

When it’s all done, you can amend the footage with a tap to make the video longer or shorter, or shift the mood of it. And then you’ve got a social media-ready clip to share around. There are other helpful perks that we didn’t mention yet, such as the newly streamlined contacts pages, the Apple Music-esque News overhaul, the ability to delete some built-in apps like Stocks and Tips (finally!), and the slick new Home app for the automated devices in your flat.

And there are some things we haven’t fully experienced, such as Siri’s enhanced smarts and cooperation with third-party apps, as well as the enhanced dialer screen that lets you take calls from third-party apps like Messenger and WhatsApp. All of these things should go a long way towards making iOS 10 feel more interconnected and well-rounded, and trim some of the inconsistencies found between Apple’s own apps and everything else.

Even though the iOS 10 beta isn’t fully feature-complete, it is mostly stable – but it’s still a gamble putting it on your main device unless you can roll with the punches. We’ve run into a handful of nagging issues so far: the AR mode in Pokémon Go doesn’t work, we can’t seem to search in the App Store anymore, and the Bank of America app in the States crashes before it can fully load.

All of those are annoying, and you might run into even more obnoxious issues. But for a taste of what’s new and next in the iOS world, it might be worth suffering through some (hopefully) temporary setbacks. At the very least, the enhancements you’ll see show that iOS 10 will bring another smart set of refinements and upgrades to iPhones and iPad this September.