Apple’s taken the wraps off iOS 10, and it looks like a serious upgrade with some very welcome changes. The new mobile OS won’t arrive officially until spring — right around the time the next iPhones are revealed — but you can bet developers have been downloading it furiously since it was made available to them yesterday. Which should mean a good selection of compatible and updated apps when it does arrive for regular folk like us.

So, what’s new? Not quite everything, but rather a lot. If we were to sum up iOS 10’s crowning glory in on word that world would be “emoji”. And yes, for a change we’re being at least mostly serious.

Apple’s Messages app has gotten a lick of psychedelic paint. The somewhat clinical green or blue (for SMS or iMessage respectively) text bubbles are still there, but now there’s the option to animate them, change text size and more. But the real story is the emoji. Now they’re three times larger and as you type messages you’ll automatically be prompted to change individual words — like “fire unicorn happy monkey”, say — to emoji with a couple of taps.

This move to the more visually arresting brings with it full-screen animated effects, including laser machines for getting the proverbial party started, confetti explosion and balloons. Then there’s the option to obscure the content of a message until the recipient swipes over it using a gimmicky feature called “Invisible Ink” (which is neither invisible, nor ink).

We’ll forgive Apple for perhaps trying a little too hard here to be more like WeChat or WhatsApp. After all, it’s tough out there in messaging land and it needed to do something to make Messages more than just the place your SMS messages from your bank accumulate.

Like messaging app Telegram, you’ll now get rich links in messages (that is, the webpage headline and lead image), plus you can send hand-written scrawls to other users, play videos or even play Apple Music song links all without leaving the warmth of Message’s embrace. But really, as Apple kept reminding us, it’s all about the emoji (rabbit, aubergine, excited face!).

It’s taken almost a decade, but at long last in iOS 10 iPhone owners can kick the Apple apps they don’t use to the curb. This will be particularly good news to those users with 16GB iPhones (one of Apple’s few remaining travesties in the face of this change) who’ll now be able to delete things like Stocks, Mail and Weather and not have to sacrifice space to them during an iOS update.

Considering our iPhones tend to be Google-powered pieces of Apple hardware, we’re pretty gosh darn excited about this one. This one’s another “at last, Apple”. Siri, which started off frustrating, then got tolerable and is now bordering on the useful has finally be opened up to developers. What does that mean? It means you’ll be able to command your AI assistant to send a message using WhatsApp rather than being confined to Messages. Or post a tweet using Tweetbot instead of the stock Twitter app (assuming Tweetbot’s developers come to the party, of course).

It’ll also mean Siri’s set to get a whole lot more useful. Want to make a note in Google Keep? Siri’s on it. Want to skip a track in Spotify while driving with your phone connected to Apple CarPlay? Yessiree! Need an Uber? That shouldn’t be a problem, either, assuming you aren’t slurring incomprehensibly, of course. For now, there’s not much Siri can do about that.

Perhaps one day 3D Touch will be as useful as Touch ID has proven, but in it’s early iterations we’ve found it more frustrating then helpful. With iOS 10 Apple’s taking its first steps towards making 3D Touch something we might actually want to use.

It’ll help you check messages or how far away that Uber is from the notifications on your lock screen, and once you’ve unlocked your handset it’ll let you see how many unread messages you’ve go from your favourite contacts, watch video highlights from sporting events you’re following and other things we’re still not entirely convinced we need.

Still, updates are always welcome, and perhaps developers will find ways to turn 3D Touch from a curiosity into a necessity. Anyone who’s used any phone with a fingerprint sensor-carrying home button knows what it’s like to spot a notification on their phone and grab it,  only to accidentally unlock it and have said notification disappear into a pull-down menu.

The new “raise to wake” feature in iOS 10 is here to help. Lift the phone and the motion sensors will recognise the gesture and turn the screen on so you can see those precious notifications without having to press any buttons.

Once awake you can also swipe right on the lock screen to laugh the camera app, which you used to do by swiping up on the icon in the bottom righthand side of the lock screen.

If you think this feature sounds staggeringly underwhelming, well, we’re with you on that one. Apple Music is getting redesigned, and we couldn’t be happier. For all of the music streaming service’s virtues, it’s clumsy interface and lack of key features pained us and put us off using it as our primary source of music.

With its overhaul for iOS 10 Apple’s promising a slicker, more intuitive Apple Music, along with a curated playlists tab called “For You” which sounds a lot like Spotify’s Discover Weekly personal playlists, with the added advantage of being updated daily rather than once a week.

The best bit? The ill-conceived Apple Music Connect which sought to bring Facebook-like social elements to music streaming and allow artists to inflict their photos of breakfast on their fans appears to have been quietly taken out back and shot. So long, and good riddance. There’s a new app on the iOS 10 homescreen called Home, and its intended to control all of your Homekit-compatible smarthome tech. Set up a selection of “scenes” and with a single tap you’ll be able to engage security mode with movement sensors on, blinds closed and so on.

Set another for bedtime and one press will lock your smart doors, set the temperature on your connected thermostat and anything else you’ve added to the relevant scene.

Should you invest in a compatible smart doorbell with a built-in camera you’ll be able to check who’s knocking from your iPhone’s lockscreen. And thanks to geofencing you can set the lights to come on when you pull into the driveway at night.

If it’s Homekit-friendly it’ll work with Home, which means all those disparate devices you’ve been investing in might finally work well together.

The mobile operators moaning about over-the-top services like instant messaging and voice-over IP (VoIP) apps aren’t going to like it, but in iOS 10 Apple’s made using these services a whole lot simpler. The iOS phone dialler now handles calls from apps like WhatsApp and Messenger and takes note of the numbers and methods you use most often to contact specific people so you can easily WhatsApp instead of SMS them if that’s what you usually do.

There’s also a TrueCaller-like spam detection extension that’ll warn you if that insurance salesman or computer repair technician who says your desktop is infected try to call. And voicemail messages can now be transcribed for you, so no more trying to cradle the phone while you scribble down a phone number or address. Apple’s News app isn’t available here in South Africa, but that doesn’t mean we’re not interested in what it’ll likely look like when it does get here. Like Apple Music, News has had a facelift and some liposuction. It also now offers support for subscriptions and allow users to get notifications when publications they’ve subscribed to push out any new content.

These updates are mainly cosmetic and of more interest to publishers than the rest of us, but we’d still like to see News roll out to more regions and hopefully this update brings that eventuality nearer.

Since it launched at Google’s I/O event last year Google Photos has had us cooing over its face and object recognition, automatic animations and story collating and it’s incredibly slick layout and user interface. Apple Photos is, at last, trying to catch up.

Like Google’s offering, Apple Photos will also automagically create movies for you from your content and scrapbook photos from the same event or location along with an accompanying map or other pertinent location info. You’ll find these creations under the new Memories tab.

The most interesting thing about Apple’s take on photo organising, though, is that it promises to do the heavy computational lifting on your actual device rather than off in a server farm somewhere. Why does this matter? Because what Apple’s trying to say is its solution offers better privacy than Google’s.

Does that matter to you? Well, we suppose the depends on the sort of pics you’re inclined to shoot. Given our checkered history with iCloud, the number of photos we like to take and Google’s offer of unlimited storage for slightly compressed images… we’re probably going to stick with Google Photos, but at least these updates will mean the pictures on our iDevices will be easier to manage. 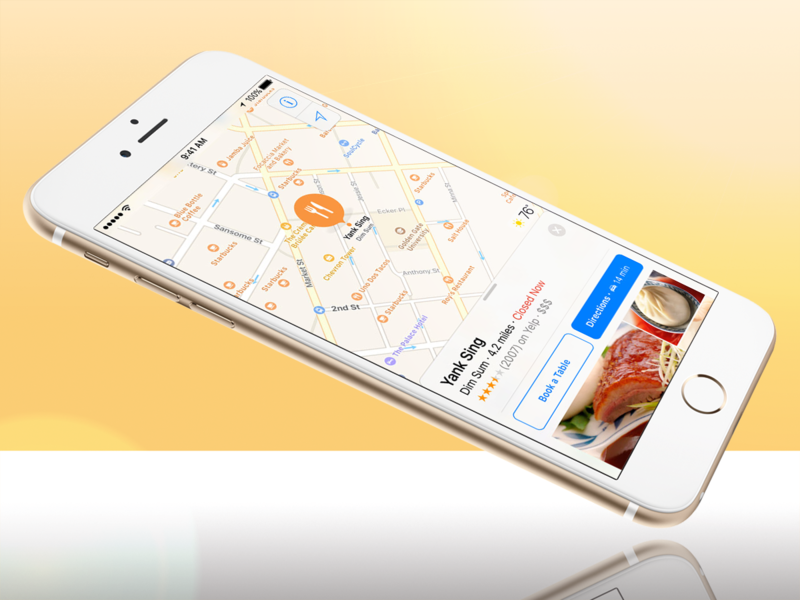 Thanks to a nightmarish start and Google’s substantial headstart, iOS Maps just hasn’t found the sort of traction with consumers that Apple would have liked. But the company keeps hacking away at it’s mapping app, hoping it can win back the hearts, minds and fingers of Google Maps diehards.

First, Maps is now being opened to developers, another move away from the walled-garden approach that has long been derided by Android users and annoyed those Apple users who like Cupertino’s hardware but wish it would play a little nicer with others.

What does opening it to devs mean? It means other apps like Uber or Zomato will work with it, so you can do other map-related activities within the app itself.

Like Google’s integration between its various services, Maps will also now mage suggestions based on things it knows about you from other services. Got an appointment with location info on your calendar, Maps will be able to display that and offer you navigation.

Navigation is also getting an update with traffic info and rerouting options in case you need to fill up your car en route or stop for a snack. Again, this is only really playing catchup with Google, but it’s a step in the right direction.

Even the keyboard has gotten an update in iOS 10. Combine Apple’s existing smart suggestions that appear above the keyboard and endeavour to suggest the word you’d like next with Siri’s increased brainpower and you get more contextually sensitive suggestions. So, say you’re talking to someone and they ask where you are, the keyboard will now suggest sharing your location.

As with all of the updates outlined above we’re withholding judgment until we actually get to use them, but as usual we’re pretty excited by Apple’s update to iOS, even if it means our older iDevices will probably start looking a little long in the tooth once the demands of the new OS are placed on them. Will these updates make iOS indispensable? We’ll find out come spring.