What we had previously seen of Overwatch was phenomenal and had us itching for more time with Blizzard’s team FPS, and now our prayers have finally been answered. The servers have gone live, the ribbon has been cut, and 21 amazing heroes have been unleashed into the big bad world. Overwatch has landed.

Countless hours of our lives have been hoovered up by its closed beta, and the full release will do the same. This is the most joyful shooter we’ve played in a long time, blending old and new mechanics to make a mechanically complex experience that’s easy to enjoy.

Those seeking ladder-climbing glory may be frustrated by some of the game’s ‘missing’ elements, but if you’re the kind of person who plays FPS games for 10 minutes of unbridled fun, then Overwatch is the unmissable shooter of 2016. Unlike Call of Duty: Black Ops 3 and Halo 5: Guardians, Overwatch is a game where ratcheting up your kill count will guarantee you victory. Across each of the game’s three match types, players are divided into two teams of six, each with a specific objective. In Escort, the attackers must escort a payload to its destination whilst the defenders try to stop them. Assault sees both sides battle to secure control points, one attacking, one defending. Finally, the sublimely named Control asks the two teams to fight for dominance of a single control point.

These modes might have been the schtick of Team Fortress 2 for over a decade so we can’t exactly award Overwatch points for originality here, but each one is terrifically tense. We’ve experienced so many moments of giddy desperation. In Escort, we found ourselves body-blocking the moving payload whilst screaming bloody murder as the cart approaches the end of the track and the enemy win is in sight.

Assault has lead to similar screams of the extremely unmanly variety as teammates rally for a last-ditch offensive on the final control point, the game timer trickling into single figures. More often than not, the game’s competent matchmaking ensures that down to the wire dramatics are a matter of course. 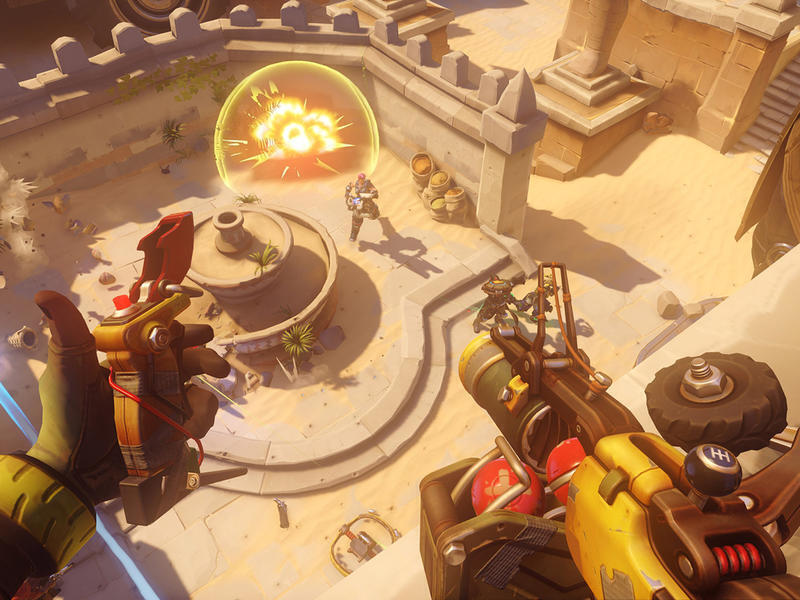 None of this makes Overwatch special, but the sight of robot ninjas fighting armor-clad behemoths does the job well enough. Classes in first-person shooters are nothing new, but this game straps that pedestrian idea (sniper, soldier, assassin… yawwwwwn) to a rocket ship bound for the moon.

Rather than featuring a list of eight generic class types, Overwatch presents a huge list of ‘heroes’ who play entirely differently. Whereas in the latest Call of Duty: Black Ops III classes only define a character’s special ability, here they dictate absolutely everything about them, from their health and primary weapon to their unique abilities and role.

Every inch of these characters has been carefully thought out, especially in regard to their hero powers. Each playable hero sports four power abilities outside of their basic attack making each one the perfect tool for a specific job. Some are great at sieging, others at defending, and others are specialists. Tracer, for instance, is like a killer-aphid as her powers let her dash quickly around her enemies – if you don’t swat her, she’ll buzz you to death.

Trying to pick a favourite ability from the complete set is a Bloodborne-esque challenge of monumental difficulty. Roadhog’s deadly chain, Pharah’s rocket barrage, Reaper’s circle of death, how to choose? Blizzard has done a supreme job of making each power feel electrifying without overstepping the mark. Firing a gun is fun enough. Firing off four abilities in a row is a laugh riot, and makes for the kind of dynamic, interesting plays that every gamer dreams of.

The best competitive games produce those exhilarating moments that you can’t forget. Maybe you scored a triple kill in Black Ops 3, or a wall-run skillshot in Titanfall. Whatever your FPS poison, these moments only tend to happen occasionally.

In Overwatch, these blood-pumping moments happen all the damned time. Every few seconds someone on the battlefield is firing an ability, an ultimate just reached full charge, or an objective is stolen away or lost forever. It’s ordered chaos of the very best kind. As you might be able to tell by now, we have very few complaints of Overwatch. However, there is one teeny tiny chink in this shining knight’s armour and that’s Ranked mode.

Those expecting to jump on the ladder from day one are set to be disappointed as Ranked mode was disabled before launch. When competitive play cropped up during the game’s closed beta it suffered a few nasty difficulties, the most irritating of which was game abandonment. With no effective penalties for leaving mid-match, players were bailing when things weren’t going well, leaving their teammates stranded in a five, four, or even three versus six match up.

This kind of behaviour is the death knell for competitive play, so Blizzard is taking the time to work out the mode’s kinks before reinstating it at some point in June. Until then, players are stuck with Quick Play. At the time of writing there is only one other blemish on the shiny clean exterior of Blizzard’s frenetic FPS: microtransactions.

All 21 heroes can be customised with a variety of exotic skins and Overwatch-specific extras such as victory poses which appear when your team wins a match. Said items can only be acquired through the game’s ‘loot boxes’, of which the player is granted one per-level gained.

Of course, we don’t all have thousands of hours to sink into the game. Those with fatter wallets and slimmer recreational time understandably need the option to purchase their goodies. Herein lies the problem: Overwatch forces players to purchase loot boxes rather than simply pay for the item they want directly. It’s quite possible to sink R350 into the game and leave without any of the items you were hankering after.

Boxes sometimes contain coins, which can then be traded in for items, but there’s also no guarantee of how many coins you’ll receive. R175 netted us around 400, which isn’t even half the cost of a top-tier skin.

The words ‘sour trade’ don’t begin to cover it. But who cares about a lack of ranked mode and annoying microtransactions when Quick Play is just so damned jubilant. Forget these minor infractions – this is a game that wants you to feel amazing, to relish the memory of a sublime ultimate, to cheer your team onward to victory.

Make no mistake, this is the best shooter of the year so far and our favourite Blizzard game since WarCraft III back in 2002. Overwatch is one long party that you’d be mad to miss so pick up your controller, pick up a hero, and dive in – you won’t regret it.