Here we are in May and still the Stuff team’s kinda working on its fitness. Still. To be fair, the sudden cold snap has made us all want to hibernate somewhere warm, but we’re also still pounding the pavement and parking further away from the mall entrance than necessary in order to rack up the steps.

It helps to have gadgetry, like the Fitbit Blaze, to keep us motivated. You might remember that the Blaze’s announcement drew a bit of criticism. People derided it for its unconventional looks when it was announced at the beginning of this year. We’re hear to tell you that it looks a whole lot better in person. And, after putting in a lot of hours wearing it, we’re finally qualified to tell you just what the Fitbit Blaze is like. The Fitbit Blaze straddles the line between smartwatch and pure fitness wearable, situating itself in the middle of just about everything thanks to its feature set. But, as a physical product, the Blaze is like the tiniest tablet you ever did see. In its natural state it’s a little black square, with a single button on the left and two others on the righthand side. Underneath, the Blaze fields its charge port and optical heart rate monitor.

But it’s not complete unless you’ve got it inserted into one of the range of wristbands you can buy for it. Despite all the options, we rather like the plain old rubberised black band. Also, the formal-looking metal one costs almost as much as the device itself, which is potent motivation to stick with the supplied one, even if it does gather a fair amount of dirt in the gaps above and below it. Inexplicably, it’s not waterproof. Well, the band is. The unit itself… that’s just splash-proof.

We’ve been able to waterproof analog watches for decades, but for reasons unknown, Fitbit still can’t waterproof its wearables. We’re as baffled by this as you are. So remove it before showering or swimming. The Fitbit Blaze, as we mentioned, balances between the smartwatch and fitness wearables worlds, but it definitely skews towards exercise.

If you want to smartwatch it up, your options are limited. The Blaze will let you know who is calling or what (some of) a text message says, but you can’t do anything more than dismiss these notifications. We found it handy but not specifically so. It’s always nice to know if it’s a telemarketer before we go hunting for a warbling handset on a lazy Sunday.

Users can also use the Blaze to change the music on their device while working out. That involves giving up some extra battery life on the wrist, but the upside is that you can play or pause tracks on your arm. Assuming your workout headphones don’t already do that for you in the ear region or with an in-line control. And assuming you’re playing audio from your phone’s default music app and not a third-party one like Simfy or Spotify.

By now you’ve noticed that we’re talking most about controlling the Fitbit Blaze using the touchscreen controls. That’s because…

We Don’t Need No Stinking App 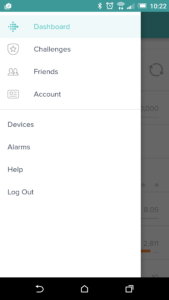 No, really, we’re not that fond of Fitbit’s app, but not for the reason that you’re thinking right now. The app is great, it’s detailed, it keeps all of your goals in one place. But so does the Blaze, with the added advantage of you not having to remove a phone from a pocket and fiddle with buttons.

Setting up the Blaze also requires a conjunction of… not the spheres, exactly, but you will need to use the app, and the Fitbit website, and the Blaze itself, in order to get everything working just so. If you want that hourly movement goal, you need to log into the website. Need to change an alarm? Ditto. Want to control your music? The app, plus the Blaze and a trip to the Fitbit forums because it still won’t freaking work! … ahem. Moving on…

Once everything is all set up to your liking then you will have a full-featured app on your smartphone, which you will never look at because you’ll use the customisable colour screen the Blaze has to get all your metrics at a glance. Which is good, because you’ll spend a lot of your time… The Blaze really shines as a device when you’re using it as a workout buddy. It’ll automatically detect what sort of workout you’re doing (which takes some setup — see above), from running to weights to walking to an elliptical to… you have options, okay? Or you can manually set it to start tracking you on a run or something similar if you don’t want to wait for the auto-features to kick in.

There’s also something called FitStar, which gives you a few basic bodyweight workouts with instructions on your arms. For those lazy parking-lot moments when you can’t get to the gym, we think. It’s not much, but it’s better than slacking off all day.

The Blaze is reasonably accurate when it comes to judging your distance, too. Not as accurate as a dedicated running wearable, true, but you can add that functionality to the Blaze by taking along your smartphone. It can borrow your handset’s GPS for greater accuracy but, again, that’s at the expense of battery life. Five days of stock battery, more or less, isn’t bad, though, right? Otherwise there are all the standards: Sleep tracking is good, stair tracking is better and it’ll keep an eye on your steps and distance for the day if you just want to move around more.

We wonder whether it’s a little generous with its step count and resting heart-rate measures, but short of counting our steps for a day or lugging around an ECG machine, we’re unlikely to have our suspicions confirmed or denied. Nonetheless, we console ourselves with the thought that it’s the overall trend that matters… as long as it’s consistently inaccurate, you know?

The Blaze isn’t a perfect device, though. The initial concerns about its looks haven’t gone away just because we think it looks better in person. Some people are going to dislike it based on looks alone, and that’s okay. It’s part fashion-statement, so taste has to come into it.

There’s also the heart-rate monitor. We tested with two Blaze units and while one seemed fairly accurate, the other seemed to skew a little higher than we were expecting. It’s no train-wreck, just don’t trust this wearable over your doctor’s very expensive machinery is all.

But there’s one thing, ONE THING, that Fitbit really has to stop doing. The charger. The Fitbit Blaze’s freaking charger, which is a completely proprietary box that holds the square bit and which will probably break a few months down the line. Why Fitbit doesn’t come up with a single charger design and leave it at that (and let them be interchangeable between models, please) is beyond us. It works, sure, but if we lose it, or it breaks, then the Fitbit Blaze is a R4,000 piece of drawer clutter. Or we have to, you know, actually go looking for a new charger. Somewhere. Can you even buy them on their own?

The Fitbit Blaze is going to be divisive. It occupies a very specific space, where the user is someone concerned with the look of their wearable as well as what it can do as an exercise tracker. Even then, some people aren’t going to like the Blaze’s looks. But you’ve got all of your data on your wrist, which makes up for (and could be the reason for) not wanting to use the app all that much. The basic smartwatch functions are a nice-to-have, too, as is the ability to turn that off for a little extra battery life.

Given we don’t find the notifications terribly helpful and the serious sports modes still require you take your phone along we’re inclined to stick with the excellent — and far more discreet — Fitbit Charge HR for daily wear and wear a dedicated sports watch like TomTom’s Runner Cardio when needed. But then, we’re also spoilt for choice. If you need serious sports metrics you’re going to need something more serious. If you just need fitness tracking you don’t need this much. If you want a mix of both perhaps the Blaze is for you.