So, you’ve tried Simfy Africa, Deezer and Google Play Music but you’re disappointed by their rudimentary interfaces. You’ve taken Tidal for a spin, but Jay-Z’s cockiness about it puts you off so much even Queen B’s Lemonade and the promise of improved audio fidelity — which you haven’t been able to discern — isn’t enough to justify the cost. And Apple Music doesn’t let you make collaborative playlists, offers tone-deaf recommendations and might, you know, foist another U2 album on you when you aren’t looking.

What you want, nay, what you need, is a premium Spotify account. The service has hinted it’ll be in South Africa before the end of the year, but you’re tired of waiting. Plus, so many of your friends are using it you’re having a hard time controlling the FOMO. You’ve tried faking your location and IP address with a VPN service but that only gets you a free Spotify account, which is a pretty limited version of the service. Sadly, the Swedish streaming company will only let you get a premium account if your method of payment comes from one of the countries in which it operates.

But, if you can get payment for a premium account down, Spotify will allow you what it calls “unlimited travel”. In other words, if your money comes from the right place your IP address doesn’t matter. Which makes sense. You may, after all, be a jetsetter who spends very little time actually living in the country that’s home to your bank account.

What it means for non-jetsetters in unsupported regions is: if your money’s good you don’t have to muck around with VPNs or other digital jiggery pokery to use Spotify once you’ve done the initial setup. If you can pay and install the apps everything will just work thereafter.

In other words, while some services will gladly turn a blind eye to your location if your money’s good, Spotify works the other way around. If the money’s good you can be wherever you want. Right, that’s all good and well, but how do you pay so you can play? Here’s how:

Get someone else to pay

The first and easiest solution to getting Spotify in countries where it isn’t supported is by getting someone you know to pay for you. If you have a willing friend, relative, former lover or pen pal, try and convince them to pay for a year upfront and it’ll bring the monthly cost down. You can them reimburse them using Paypal or similar, or work your way down their Amazon wishlist until you’ve settled up. It’s not the most elegant solution, and relies on you having a willing party in the right country, but it’s definitely the easiest and most cost effective way to go.

Pro tip: Different countries have different pricing, so if you have a willing payer in Taiwan it’ll cost you around half the $9.99/month it costs in the US. The UK, meanwhile, is the second most expensive at £9.99/month. See a full list of the different Spotify Premium pricing here, and if you can find a friend in the Philippines, do it.

If you can’t impose on a friend, IRC chat buddy, pen pal or distant relative to foot your Spotify bill the next best best is to buy gift cards that’ll look the part of a local card in a supported region. One of the longest running and most reliable of these services is Jerry’s Cards.

Once you’ve bought a card you’re going to need to make it look like you’re in the US to download and install Spotify and insert the payment card details. For this you can use something like TunnelBear, which will give you 500MB of free VPNing a month — more than enough to get Spotify up and running.

Pro tip: You’re going to be charged a premium for gift cards, so buy bigger to reduce the size of the markup you’ve got to endure.

Android users, you’re going to need to search Google for “Spotify APK”, download the install file and then run it. Your phone will likely tell you it can’t install apps from “unknown sources”, but will also let you change that in the security settings. Download the APK, install it, sign in and you’re good to go. You may want to return to your security setting and revoke the ability to install apps from unknown sources, too, just to be on the safe side.

Apple users, you’ve got to jump through a few more hoops. You’re going to need to get the app through an App Store in a supported region like the US. The easiest way to do that is to sign out of your Apple account, switch to the US App Store and create a new Apple ID linked to a different email address to the one linked to your usual Apple ID. When prompted for a physical address put in a random US address (just Google a chainstore or restaurant you like, it’s only really the postcode that needs to be legitimate) and you should then be able to login to the US App Store and download free apps without putting in credit card details. Voilá!

Windows Phone users, try not to keel over at the shock of actually having a native app on offer, and then download it here. 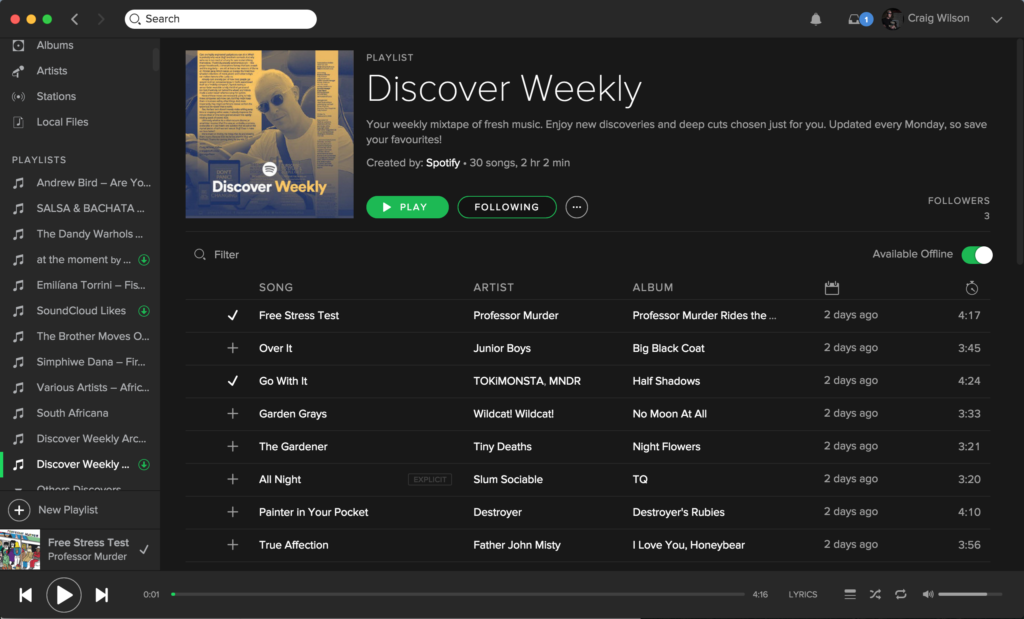 A word about iTunes

There’ll doubtless be those among you who’ve still got US or UK iTunes accounts from spending time in either country or from trying to get games in the early days of the App Store when they weren’t offered in SA. If you’ve still got an international bank card linked to your account you can get Spotify that way, but you’re going to pay a 30% premium on the rate because Apple insists on its pound of flesh from every transaction the App Store processes. It may work out cheaper than the gift card route, but it leaves a bad taste.

If all of these sound like far too much work there’s another, far less labour intensive solution: wait for Spotify to officially launch in South Africa. But why would you want to do that when its Discover Weekly custom playlists feature, ability to make collaborative playlists with friends and smart radio stations are just so downright excellent?

For a selection of tips about how to get the most out of a Spotify Premium account, check out the feature in the Projects section of the May 2016 issue of Stuff.