Facebook is serious about 360° video – enough to dip its toes back into hardware with the ludicrous Surround 360 camera.

It’s pretty difficult to make a 360° camera look boring, even if LG gave it a pretty good try, but the Surround 360 looks like a bona-fide flying saucer.

It’s got a whopping 14 cameras around the outer edge, plus one fish-eye camera pointing up and two cameras pointing down.

That’s enough to shoot what Facebook calls “truly spherical” video. It can do stereoscopic 3D, too, with enough resolution to shoot 4K, 6K or even 8K for each eye. Basically, it’s as future proof as a 360° camera is going to get. 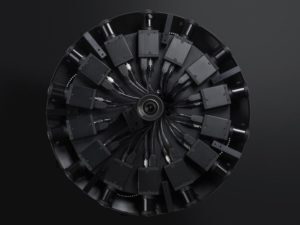 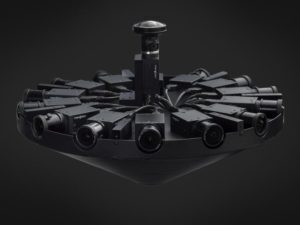 Any shot footage gets rendered online with some Facebook-developed web software. It’ll work with multiple 360° cameras, too, not just the Surround rig.

Facebook-owned Oculus only launched the Rift VR headset a few weeks ago, but it’s already clear that 360° video is a bit of a weak link right now. The content that is available isn’t exactly high resolution – something that should change once the Surround 360 makes it into filmmakers’ hands.

Facebook won’t actually be selling the camera, though. Instead, it’ll release design docs so filmmakers will be able to build a rig themselves.

The plans should be ready to download by mid-year.