Every year the Stuff team faces the arduous but necessary task of picking the shiniest, prettiest, most life-affirming and downright desirable gadgets of the preceding year. There are many nominees, and more than two dozen categories covering everything from wearables to cars, but in the end only one device can win in each category, taking with it not only the award, but immeasurable pride and prestige.

That’s right, “immeasurable”, because we couldn’t possible measure it. That said, our research* suggests winning a Stuff Gadget Award can make a product up to 82%* more recognisable to consumers, can boost rival brands’ envy levels by as much as 66%*, can make winning brands’ country managers up to 17%* sexier, and guarantees 25%* less space on a 1m mantelpiece.

(*guesstimations based on years’ of experience, hearsay and two lunchtime beers on an empty stomach.)

This year’s glitzy ceremony was held in the cigar lounge of Tsogo Sun’s always chic Southern Sun Hyde Park hotel, sponsored by Telkom, and hosted by Stuff publisher and editor-in-chief, Toby Shapshak, and recently appointed editor, Craig Wilson. Hendrick’s Gin and Castle Lite helped ensure guests could wash down their canapés when cornered by one another at inopportune moments to discuss the merits of heart-rate vs. step-based fitness trackers. Even a bit of Cape Town-style wind and precipitation couldn’t dampen the mood. Pawn brokers will never understand their worth The first karaoke singer always has it the hardest 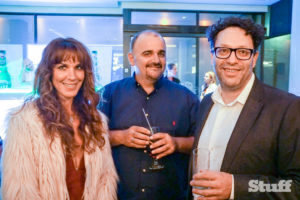 The start of the landslide Who says gamers never get out? And then I said. And then she said… Hold the boys up before they fall over! Hold the boys up before they fall over!

Stuff would like to thank Telkom, Tsogo Sun, Hendrick’s Gin, Castle Lite, Bisquit, Braven and Samsonite for their generous support of the Stuff Gadget Awards for 2015.