Samsung Galaxy S7 vs Apple iPhone 6s: the weigh in 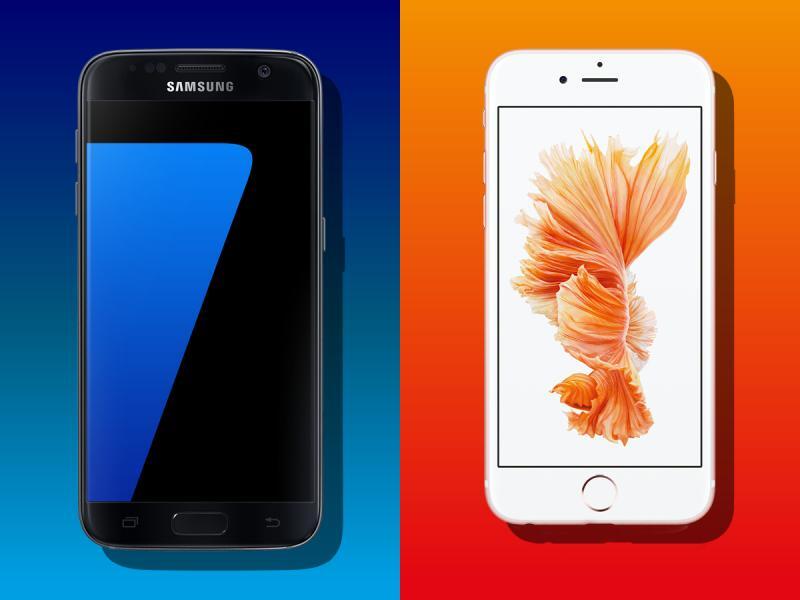 If your phone contract’s about to run out, then you could be in for a rather difficult decision.

Apple’s iPhone 6s is still going strong, and may have been tempting you for quite some time. But Samsung wants to go and spoil your clear cut plans with the incredible Galaxy S7, its new 2016 flagship. The iPhone 6s and Galaxy S7 are both sleek, well-designed slabs of engineering, and either one could happily walk away with a first place tiara at a smartphone beauty pageant.

Design is subjective of course, but both handsets match each other in terms of build quality as well, with the Galaxy S7’s metal and glass build offering a fine match for the iPhone 6s’ all-metal shell.

They feel sturdy in the hands, and easily earn their flagship status, though the iPhone 6s might just pip the Galaxy S7 to the post in terms of feel if you prefer metal to glass (which can almost feel plasticky at times).

The Galaxy S7, however, has the additional benefit of water-resistance, without any pesky port covers to worry about, which is why it clinches the first round. The iPhone 6s’ screen remains one of the smallest of all of the flagship smartphones, measuring in at 4.7 inches. The Galaxy S7 on the other hand retains the 5.1in size of its predecessor.

If you’ve got particularly tiny hands then the iPhone 6s’ screen might be more manageable for you, but Samsung has also done a good job of cramming the Galaxy S7’s screen into a fairly compact body, so it could still be fairly comfortable for most people.

But resolution and screen technology are the things that really sets the displays apart. The Galaxy S7 keeps that same 2K resolution as its predecessor, and it easily out-classes the iPhone 6s’ 326dpi, with a 577ppi count.

Samsung has also stuck to its superb Super AMOLED panel, which means true blacks and rich, vibrant colours. Those colours tend to be a little too vibrant and unrealistic (for us, anyway), but you can tone them down a bit with the Galaxy S7’s built-in colour saturation settings.

Unless you’ve got really, really tiny hands, then the Galaxy S7’s screen is the clear winner. Here’s where things get rather interesting. Samsung has dropped the Galaxy S7 back down to 12 megapixels, which matches the iPhone 6s.

The upshot of Galaxy S7’s larger pixels and larger aperture mean that it should, in theory, have access to a significantly greater amount of light than the iPhone 6s’ camera, which should in turn provide photos with more detail in low lighting conditions.

Samsung has also kitted the Galaxy S7 out with a dual-pixel autofocus sensor, which result in super-fast focusing.The Galaxy S7’s camera also has optical image stabilisation (OIS), which is a feature that’s only found in the larger iPhone 6s Plus.

Samsung has clearly put a lot of thought into the Galaxy S7’s camera then, but while its shots are very good, it’s still not perfect.

The Galaxy S7’s post-processing is a little too happy to crank up colour vibrancy in our opinion. We understand why Samsung’s opted for this route – punchier colours make shots ‘pop’ on the handset’s display, but if you’re serious about photography, you’ll want slightly more toned down, realistic colours.

In low light conditions, the S7 is very good, but despite having the optical image stabilisation edge as well as sucking up more light, we found that it can’t quite match the iPhone 6s’ low light performance, with examples of graininess and blur being present at the edge of our test photos.

Samsung’s Pro camera mode however, makes the Galaxy S7 shine in the right hands, with manual controls for aperture, ISO and shutter speed all available. Throw in the ability to shoot in RAW, and it can be quite a powerful pocketable camera.

The Galaxy S7’s Snapdragon 820 processor and 4GB of RAM make it an absolute beast in the specs department, which is why we weren’t surprised to see it eat up high resolution 3D games with ease.

The iPhone 6s’s A9 processor is of course no slouch either, especially when you take into consideration the fact that Apple has full control over its hardware and software, optimising iOS for its own processors to squeeze as much power out of its silicon as possible. Power-wise, in real world use, there’s not going to be much noticeable difference between the two handsets.

Where the Galaxy S7 edges out however, is its memory and battery life. A microSD slot means that you’ll never have to worry about running out of space for photos, videos or music again – a luxury iPhone owners have never had.

Samsung has also crammed in a larger 3,000mAh battery into the Galaxy S7, which is much larger than the 1,714mAh offering found in its Apple rival. The Galaxy S7 lasted us a day and a half (with heavy use), so it wins out on that front too.

CLASH OF THE TITANS This is about as subjective a topic as you can get. If you’re a diehard Apple or Android fan, your decision has obviously already been made, but if you’re not committed to a camp either way, then the OS will probably come into your list of considerations.

The Galaxy S7 is running on Android 6.0 Marshmallow – the latest and greatest version of Google’s mobile OS. Standout features include Doze, which is a battery saving feature Google has baked directly into Android which ramps down the processor when a handset is left idle (i.e. on a table) and not in use.

There are plenty of Google Now tweaks and improvements, including a deeper integration of Google’s clever search service into apps such as Spotify and IMDB.

Samsung has, of course, also added its fair share of tweaks and tricks on top of Google’s base. One notable feature is the always-on screen, which displays a clock or calendar on the Galaxy S7’s display when it’s not in use. Samsung believes this is more convenient for people who constantly use their phone to see what’s next or what the current time is, and it apparently won’t use up more than 1% of battery life per hour.

There’s also a new Game Launcher that makes it easier for you to find and play games, provides the option to disable notifications while playing, and can record gameplay for sharing with friends. Not that we think the latter feature will get much use.

The Galaxy S7 also cleverly has the ability to decrease the resolution and frame rate of games to save up to an extra 15% of battery life while playing. This could come in particularly useful for games such as Candy Crush, which don’t really need all of the bells and whistles to be enjoyable.

In the Apple corner, iOS 9 is another perfectly capable alternative, with new features including Night Shift, which gradually reduces the display’s sleep-preventing blue glare to a soothing red glow automatically.

Many apps still land on iOS first too, and can tend to be better designed. Overall the software on both phones is excellent in their own right, so it really boils down to personal preference, and whether or not you want to spend time tinkering around with everything. If you’re OS agnostic then you could easily be torn between these two devices. However, overall, it’s pretty clear that the Galaxy S7 comes out on top in almost every comparison, which, incidentally, is why it’s currently sitting pretty at the top of Stuff’s Top 10 Smartphones list.

While the Galaxy S7 is by no means a revolution (either in terms of its design or functionality), it’s managed to get closer to perfection across the board, than any other handset we’ve ever tested.

The iPhone 6s is still a viable handset of course, but if it were up to us, we’d be slipping the Galaxy S7 into our pockets all day long.