If you’re the sort of person who puts stock in omens, then there may be something to that. We’re not superstitious but if we see hordes of animals evacuating a beach while the ocean recedes, we’re not going to be sticking around to post photos of it on Instagram. Omens have been part of popular culture and mythology about as long as we’ve had the ability to communicate with more than grunts and rocks and the thing about them is that they can be good or bad omens.

So it goes with HP’s Omen gaming notebook, that 15.6-inch rig which is trying to stake out territory in a usually bloody and bruising arena. When MSI, Aorus, and Asus are your competitors, going into the fight as a lightweight is one heck of a risk. Does the Omen emerge from the brawl unscathed or at the very least still breathing? We’re about to answer that question.

Aside from being an awesome book by Neil Gaiman and Terry Pratchett, the good Omen in these parts is definitely the HP Omen, at the very least in the looks department. This is because the Omen, at first glance, looks nothing like a gaming notebook. HP have gone for an altogether more styled appearance all around. Black aluminium is the order of the day, along with an unusual design which is echoed in the extremely premium box that the Omen ships in. The base footprint of the notebook is smaller than the top, giving us an inverted V-shaped effect to the machine as a whole. The Omen is skinny, considering what’s on the inside, measuring in at just 2cm. Okay, okay, 19.9mm…

The inside of the lid is dominated by the mirror-like 1,920×1,080 display, with a chiclet-style backlit keyboard sitting on top of an extra-wide trackpad. The design would be a welcome one in a business or consumer notebook. It’s a decent addition to a gaming machine but the gesture is a little wasted. Unless people actually play shooters with a trackpad in which case: HOW!? There’s also a row of programmable shortcut/macro keys down the left side of the keyboard. There are up to 30 slots for you to program – perfect for that aimbot you totally never use to make the trackpad functional.

It’s almost a given that you’re going to be swapping either the trackpad or both it and the keyboard for a third-party set of hardware. The Omen’s a gaming machine and as pretty as the customisable backlighting is, you’re going to want your usual tools on hand. Provision is made for this, with several USB ports taking up space at the centre rear of this notebook. You might want to continue with the Omen’s standard keyboard and just add in a gaming mouse but lefties will find that is a struggle. The WASD section is just fine but they’ve compressed the arrow keys. If you’re a Southpaw, you’ll want to unship that extra keyboard. It’s fine, you’re after the screen and the innards anyway. 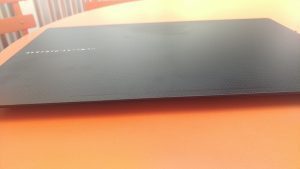 And a glance at the rear. AALLLL the connectors 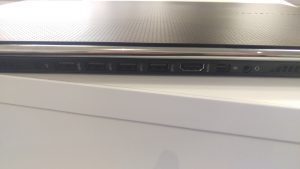 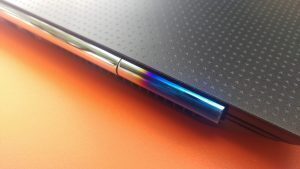 View from the top. Such cute little dimples

And HP have installed a fine set of both. The panel is bright and clear but it’s also shiny enough to serve as a mirror when the machine is off. We found it to be slightly prone to glare as a result but when the display works, it’s freaking magic. And that’s without scaling up to 4K – the Omen uses a 15.6-inch 1,920×1,080 sheet of glass and it’s beautiful. It’s a touchscreen too.

Inside, the HP Omen we had to test had one of Intel’s Core i7 4720HQ chips, running at 2.60GHz. We’d have preferred a more modern chipset in this gaming machine, since we’ve skipped from Haswell, over Broadwell, and we’re into Skylake now. It feels like poor form having a fourth-gen Intel processor but the Omen still handles well enough. The 4720HQ is just over a year old, after all.

If the silicon is getting on a bit, the 16GB of RAM, 512GB of Samsung solid-state space and 4GB Nvidia GTX960M go some way towards making up for it. The hardware configuration handles well on the Windows 10 Home installation as far as the day-to-day goes. There’s a touch of HP bloatware on the Omen but nothing that the average gamer can’t handle.

What good are all those pretties if there’s nothing on the inside? That’s either a direct reference to the Scarecrow in The Wizard of Oz or we’re talking about the Omen’s performance chops. Whichever suits you best, really, but bringing up Dorothy now would just be a little weird. Performance it is, then. We ran the HP Omen through the Unigine Heaven and Valley benchmarks, at two distinct sets of settings, to get a feel for what the Omen can do. 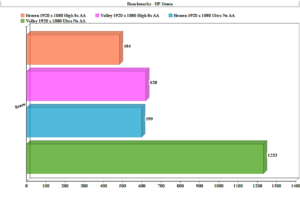 The first Heaven test was at on High 1,920x,1080, for DirectX 11 and with 8x anti-aliasing enabled. The second changed things up to Ultra, with no anti-aliasing enabled while keeping the other settings the same. An average FPS of 19.2 and 23.8 respectively were seen, with scores of 484 and 599 popping out the other side. Which is playable but not especially eyebrow-raising.

Valley’s outing was slightly better. There was a High, 1,920×1,080 DirectX 11 8xAA test and an Ultra, no-AA test with average frame rates of 14.8 and 29.4 and scores of 620 and 1233. It’s a better result than Heaven but the hardcore gaming hardware manufacturers have little to fear from the Omen at present, except in the style department. If you’re going to opt for HP’s Omen you’re going to be doing so mostly with design and novelty considerations in mind. The backlighting, custom keys, display and hardware all scream gaming but they do it about as loudly as the Omen’s speakers. That is, clearly but not terribly loudly.  If you’re after raw gaming power then you’re advised to look elsewhere as there are Skylake-capable machines out there for you to use. If you’re after something a bit more lightweight and elegant, the Omen might be the sign you’re looking for.