Though the annual Mobile World Congress even in Barcelona only starts on a Monday each year, Samsung tends to do its damnedest to steal the limelight on the Sunday by announcing its shiny new flagship smartphones and an extra treat or two. This year, rival LG not only had an event first, but unveiled so many extra treats we’ve got a sugar rush.

LG’s new line-up is centred on the G5, a metal, uni-body design handset that’s all screen up front, double vision round the back thanks to a pair of camera lenses and a smart, removable battery that also lets users plug in various other bits and bobs. So far, so pretty. 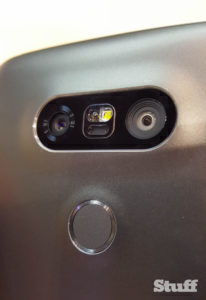 You still get that familiar rear power button, only this time it’s also a fingerprint sensor. The volume buttons are on the side instead of above and below it and — hallelujah — the headphone slot is back where it should be on a smartphone: at the top. Charging and a physical connection are done via USB Type-C and theres support for super-fast charging.

The 5.3in/12.7cm screen is a little smaller and a little more manageable in the hand than the 5.5in G4. Resolution has stayed the same, and it might not be an energy-sipping OLED, but LG’s done some tech wizardry with the LCD panel to allow always-on notifications that drain less than 0.8% battery per hour. At first blush the display also looks more natural than the saturation-heavy G4’s.

Back to those two rear cameras we mentioned — one’s a 16MP snapper with a standard 75° FOV, but the 8MP secondary sensor has an ultra-wide 135° FOV. That’s about 15º wider than a human eye, which means you won’t have to get down on your haunches or step back to fit everyone into your group shots.

Focusing too much on specs would almost miss the point with the G5, but that’s not to say it isn’t a speed demon. A Snapdragon 820 CPU and 4GB of RAM should help it fly through Android 6 Marshmallow, even with LG’s custom skin on top (which has ditched the app drawer for an iPhone-style home screen setup, by the way). The G5 is really about two things: an extensive selection of supporting devices, and sticking it to Samsung wherever possible, albeit without explicitly saying so. Like the latest Samsung’s, you get 32GB of storage on board with the G5, plus that all important microSD card slot and a removable battery, despite the sleek, all-metal body design. Instead of a removable back cover, the LG G5 has a removable bum. This means you can swap out the battery or plug in LG’s camera accessory that extends battery life, improves ergonomics an offers dedicated zoom, video and capture buttons.

The removably bottom also means you can add an amplifier/speaker DAC unit from Bang & Olufsen, or any number of other accessories from third parties who care to get involved thanks to LG opening the specs to anyone who cares to have a fiddle.

Spin me right round, baby

We’ve got two predictions for MWC 2016. The first is you’re going to see plenty of phones with two cameras given how cheap and prolific mobile camera hardware’s gotten. The second is that we’re gonna be tired of the terms “VR” and “360” by the end of it. LG’s G5 has the two cameras covered, and its 360 Cam and VR headset bring both the means to capture VR images and videos, and the means to view them in two, affordable looking pieces of gear. The 360 cam is point-and-click and offers a pair of 13MP cameras with 180° lenses. The stitching looked a little suspect on the engineering sample on display at the show, but if LG gets the price right it could be a really cheap way to get into VR video.

Meanwhile, the 360 VR headset is being pitched by LG as a budget solution for those who don’t want to fork out for Samsung’s Gear VR or wait for Oculus Rift or HTC Vive. The 360 VR is the lightest headset around, and it’s insanely compact too. You don’t dock your phone inside like the Gear VR; instead, it connects to a G5 with a USB Type-C cable, which also means the phone then turns into a controller for interacting with what’s onscreen, or in-eye, or whatever the term is when it comes to VR magic.

Each lens in the 360 VR can be adjusted individually and there are physical back and forward buttons on the top of the device. Our initial impressions were that the resolution wasn’t great, but like the 360 Cam, the 360 VR may prove to be a perfect intro to VR for those who’re keen to play with it but don’t want to drop a pile of cash on gear. We’ll have to wait for pricing to see how that plays out.

LG’s engineering team is evidently as big a fan of The Force Awakens as luggage maker Samsonite, because they’ve gone and made their own BB-8 except the Rolling Bot can do lot more than just look adorable and make your neighbour’s children jealous. It can control your TV with a built-in IR blaster; it can keep an eye on the house when you aren’t in with its built-in camera; and, thanks to its integrated laser pointer, it could soon become your cat’s new best friend.

You can drive it around using your phone, with the live video feed pumped back over Wi-Fi. No news on whether you can set it into patrol mode and give intruders 20 seconds to comply, though.

Again, there’s no pricing info yet for the Rolling Bot, but we want it anyway. How long until someone gives it a custom paint job to looking like a BB-8? We suspect not long at all.

Lastly, LG also showed off a controller for Parrot’s range of drones that it claims will make flying a drone so easy and intuitive even our grandparents will want a go. The prototype controllers — which are expected later this year — weren’t on show at the G5 unveiling, but demonstrate just how serious LG is about adding to its accessories range and making its new flagship a genuine alternative to that other Korean hardware manufacturer’s smartphones. We’re all for a little bit of healthy competition. And drones. We really like drones.