Social media is awash with the announcements coming out of this year’s Mobile World Congress (MWC) in Barcelona, including everything LG unveiled a few hours before rival Samsung took the wraps off its new Galaxy S7 and Galaxy S7 Edge smartphones and its 360 VR camera. Which is why we thought we’d trim the fat and give you the nuts and bolts of what’s beginning to sound like a very strange mixed metaphor sandwich, indeed.

These are the seven things you need to know before deciding whether either of Samsung’s new flagship phones is the one for you. Both of Samsung’s newest handsets include the Super AMOLED display tech that we’ve come to know and love — lush, bright, and colourful.

But, while the Galaxy S7 retains the same pixel density as the S6 at 577ppi, the S7 Edge’s screen is 5.7in/14.9cm. That’s the size that the S6 Edge+ had last year. It seems that if you want an edge-tacular Samsung phone this year, it’s going to have to be phablet-sized.

The S7 Edge’s screen may be the same size as the S6 Edge+’s, but it’s packing even more pixels: The pixels per inch count has gone up from 518ppi to 534ppi.

That might seem like a minor step up in clarity, but your eyeballs will feel the difference when you have to read a wall-o-text email on your S7 Edge. The Galaxy S7 and S7 Edge have an autofocus that will more than make up for your ponderous, human reactions. During our hands-on every tap turned out excellent shots, instantly and without blur, even as we were simultaneously moving and snapping in dim conditions.

It comes as something of a surprise that the megapixel count has actually dropped from the S6’s 16MP to 12MP on both the S7 and S7 Edge, but larger pixels on the sensor coupled with a larger aperture (the f/1.9 of the S6 has been bumped to f/1.7 on the S7s) means way better shots in light-lacking situations. With GPU performance improved by 60%, the sum of the phones’ parts equals a liquid smooth user experience and better gaming. The phone will even take the heat off you during long gaming sessions with a special, closed cooling system.

To prove how seriously the Galaxy S7 and S7 Edge are taking your gaming experience, there’s a new native app called Game Launcher. When you open up a game app using this, it will grab snaps of you as you play, giving you a very shareable smug-mug to accompany that new high score.

Game Launcher can also lock your Recents and Back keys so you don’t accidentally exit your game, and it will stop notifications from spoiling your winning streak. If you’re not top of the leaderboard after pulling these extra stops, you’ve only got yourself to blame. 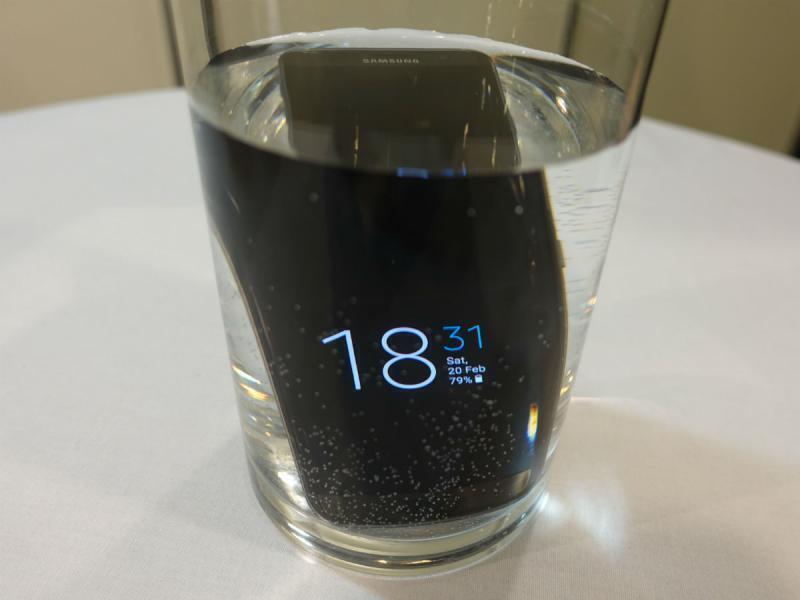 The new Galaxy S7 and S7 Edge can make a splash in more ways than one, as both come with the IP68 waterproof rating that indicates they can survive a dip in depths of up to 1.5 metres for 30 minutes.

And this privilege doesn’t come at the expense of prettiness. There are no fiddly flaps desperate to detach themselves from your phone or easy misplaced plugs to remove the waterproofing prowess.

They look good and feel even better The Galaxy S7 and S7 Edge may look practically identical to their predecessors, but you’ll feel the difference once you pick them up.

They’ve both got slightly curvier backs, lending to a more ergonomic and natural hold. However, as good looking as they are, you might want to put a cover on them if you don’t want distracting smudges on all that shiny metal.

At least one of the endlessly snaggable protrusions has been reduced: the camera bump is now just 0.46mm. It’s a shame it’s not completely flush, of course, but it’s significantly less in-your-face. The picture above illustrates the difference, with the S6 Edge on the left. Hopefully by the time the S8 rolls around we’ll be back in the land of the flush mobile camera, a land from which we kinda wished phone manufacturers had never ventured. Booted up with 4GB RAM and a quad-core processor, the S7 and S7 Edge promise a performance that’s more than 30% faster. Throw in a larger 3000mAh battery for the S7 and a 3600mAh one for the S7 Edge and that power should theoretically last longer than before.

We say that, but in reality we know the battery will go the same way as every other mobile phone’s battery: great for the first few months, needing regular, daily charging thereafter and needing to be replaced or never too far from a plug a couple of year’s in. That’s not Samsung’s fault, that the nature of battery tech.

That the batteries can’t be removed and replaced will continue to annoy some phone fanatics — and gives LG some bragging rights with the G5 — but at least fast charging is still supported.

If that doesn’t sway you, this should: support for microSD cards of up to 200GB. The return of expandable memory, thanks to a hybrid SIM tray that lets a microSD sit alongside your SIM card, will be very welcome to plenty of media and app hoarders. It’s also one of the things Samsung used to lord over Apple, and it remains a serious head-scratcher why it was dispensed with in the S6 and its brethren in the first place. Welcome back microSD slot, we’ve missed you. Gone are the days that you’ll have to wake your phone up to check the time or your numerous notifications. You can activate the new always-on feature to display only the most pertinent information, such as the time, date, notifications, calendar, or add a touch of personality with various customisations.

The AMOLED display allows it to eliminate the black pixels which goes a long way in saving battery and creating a nice visual at the same time. Samsung says the new display trick only sucks around 1% of the battery per hour. Granted, that’s a lot more power-economical than constantly waking your phone to check on these things.

So, do you need the S7 or S7 Edge if you’ve got the S6 or S6 Edge/Edge+? Probably not. Like an “s” model iPhone, the new Samsung’s feel incremental not revolutionary. If on the other hand you’re coming from an S5 the new handsets are going to feel like a substantial step up.