When the Acer Predator Z35 gaming monitor, a monster-sized curved desktop screen, was dropped off at Stuff’s offices our initial reaction was one of… less-than-enthusiastic acceptance. We had to unpack, connect and start using this gigantic (seriously, it’s 35-inches diagonally) screen. It all seemed like such a lot of effort.

But now that it’s gone back to its home wherever it is that review products live we have to admit: We miss that huge, curved, orange monitor. And not just because we haven’t finished playing Life is Strange and XCOM 2 on it. The Acer Z35 — we’re going dispense with the ‘Predator curved gaming monitor’ for a while, okay? — is part of the Predator gaming lineup from the company, with its look corresponding to those splendid orange Predator gaming cases that Acer still won’t let us buy without all of the innards.

It arrived packed in a sufficiently garish box, which was wider than expected. That’d be the screen’s pronounced curve taking up packing space. Also included in the box was the slip-on base, which has to be screwed onto the rest of the screen, an HDMI cable, and the power cable and power brick. The brick is large enough for a desktop replacement gaming notebook, with good reason.

Ahead Of The Curve 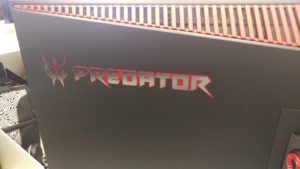 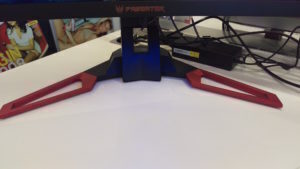 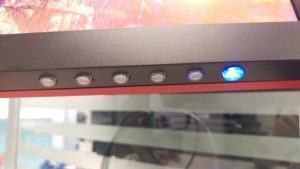 The mark of a Predator

The setup process looks a lot harder than it is, just because of the sheer size of the screen. Installing it and then plopping down in front of the display, we were struck by just how few people could see us hiding behind this ultra-wide screen monitor. It’s far too large to entrust to a small gaming setup. If your equipment doesn’t take up enough space to be called a Battle Station, you’re probably aiming too high by installing the Acer Predator Z35.

As mentioned, the Z35 features a res of 2,560 x 1080, and a refresh rate of 144Hz. The latter can be overclocked, if you’re the adventurous sort, to up to 200Hz but we weren’t really interested in setting the Z35 on fire for this review. There’s an HDMI connector at the base of the monitor, which we used as a main connection and also to turn the screen into a Chromebook (it got better), and four USB ports but these all assume you’ve got the screen at least somewhat elevated on its little slidey support column. You can be forgiven for being skeptical about curved displays but once you’re used to it, something that takes all of five minutes, a flat-screen panel actually seems to be distorted by comparison. Acer’s Z35 is actually pretty easy on the eyes in that sense. Gaming (with those titles that support the full resolution) and media are a dream to experience on the curved HD display. We’d be interested in seeing a similar, 4K-sporting model of this screen but that’s just because we’d like to give our eyes another bath in curved eye-butter.

The gaming and video aspects are the best features but there’s a dark side. More conventional tasks, like using the internet and Microsoft Office and other mundane computing tasks become a chore on this screen. That’s because there are very few standard tasks optimised for an ultra-wide-screen environment. It’s a pity, too, because the entertainment side of the equation is amazing.

As we can see, not everything can be sunshine and roses and the Predator Z35 has its share of drawbacks. Let’s start with the fact that you’re limited to just HDMI and DisplayPort inputs. That’s not necessarily a drawback but more flexibility with regard to inputs would have been appreciated. The native 2,560 x 1,080 resolution is going to be a massive pain in the eye-socket if you’re using an old system to boot. Again, if you’re still running Windows XP or an older model Macbook then you aren’t the target market but the Z35 is niche hardware – that’s all we’re trying to say.

For some criticism aimed at the target user, the Z35 can be moved up and down. It can be tilted on a horizontal plane. But you can’t adjust it on a vertical plane or swivel the monitor at all — that’s off the table completely. Unless you’re planning on moving the whole base around. Honestly, for what you’re going to wind up paying for this 35-inch curved monitor, more adjustment options could have been installed.

If you’re the sort of person who just skips ahead to the end of things then a) shame on you, b) you don’t know what you’re missing, and c), this is what you came here to see: The Acer Predator Z35 curved monitor doesn’t make any bones about its intended purpose. It works best when you’re connecting it to a monster graphics card on a Windows PC, for preference. Most of what you’ll do on the monitor is going to be gaming-related, as the 2,560 x 1080 native resolution isn’t conducive to doing much else. That’s okay though, you’re not going to be dropping around R24,000 on a gaming monitor and then using it for browsing the internet, no matter what we said when we first got it into the office.