Rumours that circulated last year suggesting a local launch of video-streaming service Netflix was imminent have proven to be true, with the service launching in 130 new countries today, including South Africa (bringing the total to pretty much everywhere except China). Previously, a visit to the Netflix website from a South African phone, tablet or computer would return a message saying the service wasn’t yet available in the country. But no more.

Now local netizens can sign up for a 30-day free trial and see how the service compares to the likes of Naspers’ ShowMax — which launched last year — without needing to make it appear as though their device is in a supported market by means of a VPN or other proxy mechanism. In other words, no more voodoo, plenty more time on the couch. Users will need to put in payment details when signing up for the trial, but can cancel after completing the sign-up process and still enjoy the free month, after which they’ll be prompted to update their payment info if they wish to continue using the service. Netflix will also remind users three days before the trial is up.

There’s no local pricing for the service, which means the rand’s very convincing rendition of a swan drive late last year is going to make it a tougher sell than some of its local rivals. Prices start at $8/month for the basic service of SD content on one screen and go up to $12/month for HD and UHD content (where available) on up to four screens simultaneously. 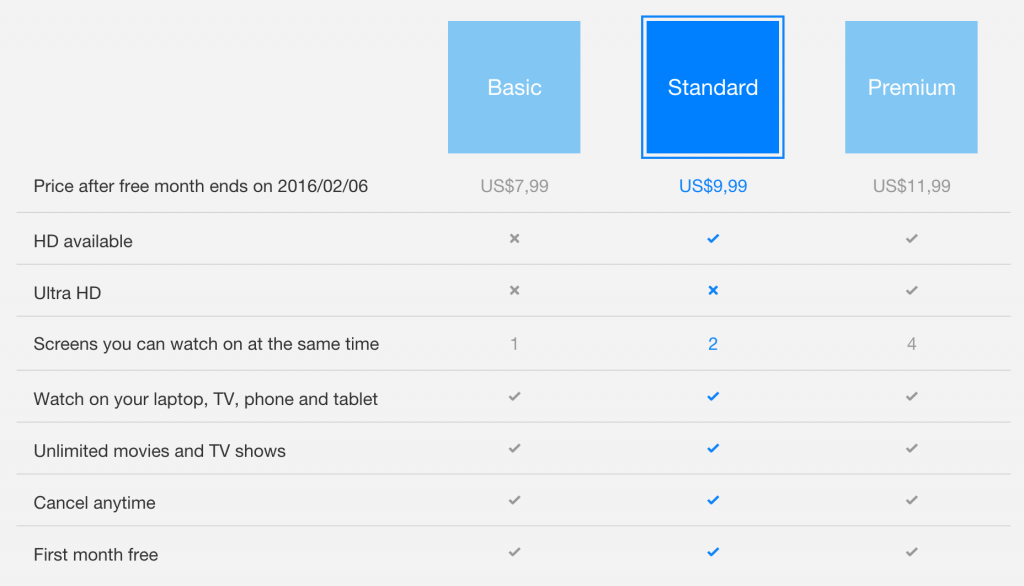 Netflix warns that not all content is available in HD or UHD and that the availability of content at higher resolutions is also “subject to your Internet service and device capabilities”. Which speaks directly to the biggest challenge streaming services face in SA: the prohibitively high cost of bandwidth, especially those who only have internet access from mobile devices, which is still most people in the RS of A.

Sure, you may be able to use a music streaming service at the office and store offline content for your commute or for home, but that’s a bit trickier with large, video files and a feature few streaming services (other than ShowMax) offer.

We do have to wonder how long it’ll be before a local internet service provider or mobile operator teams up with the global big daddy of video streaming to offer an all-in-one package? Fibre-to-the-home providers, start your engines.

Once you sign in for the first time the service prompts you to tell it which devices you’ll be using to watch content. The options include mobile devices, laptops, smart TVs, Apple TV, Xbox and Playstation. You’re then prompted to select some shows and movies you like so that Netflix’s recommendation can get to work stealing your soul… er, figuring out what you’re most likely to want to watch.

Some of the options we were presented with and asked whether we liked included Netflix original series like Narcos, Daredevil, Jessica Jones and Master of None, movies like Gravity, No Strings Attached and The Dictator, and children’s shows like Spongebob Squarepants, My Little Pony and something involving an animated girl with a strawberry on her head called Berry Bitty Adventures.

You can create up to four profiles for different users, to make sure you don’t get the same recommendations as your mom, or vice versa. We haven’t had too thorough a dig about yet, but the only obvious and curious omissions from the show list we noticed were House of Cards and Orange is the New Black — two Netflix-made series that air on Multichoice’s DStv. A licensing problem, perhaps? Those “exclusive rights agreements” for which Multichoice is so (in)famous? Without a doubt.

One hopes that once those licenses expire the content will return to Netflix. In the meantime, if you need us, we’ll be on the couch.