Another day, another streaming service launching in South Africa, except this time the streaming service comes from one of the elder statesmen of the internet: Google. That’s right folks, Google Play Music is now available in South Africa. It’s taken a while, but the combination of features and Google’s raw clout means it’s got to be considered a serious contender regardless of how much of a head-start some of its rivals have had in this market.

Google Play Music offers users 30 days to try the service for free. Thereafter it’ll cost R49.99 a month if users sign up before 26 January 2016. Otherwise it will cost R59.99 a month after the promotional period. Unlike Apple Music (which, coincidentally, recently appeared on Android), there is no family pricing plan at launch, though head of Play Services for EMEA, Mark Bennet, says this might follow down the line. As is the case in other markets where Google Play Music is already available there are three parts to the service. The first is the “Locker”, which allows users with sizeable, existing music collections to upload up to 50,000 songs to their accounts that can then be streamed like any other content on the service.

Google scans uploaded tracks and matches them to existing content in its library, but where tracks can’t be matched — like home recordings, bootlegs or the like — it uploads and stores these on its servers. For those who use other Google products like Google Drive it’s good to know that any tracks uploaded to the service don’t count against a user’s existing storage allocation. The second part of the service is the MP3 store where users can buy and download tracks. Bennet says sometimes tracks are available here before they trickle down to third part of the service, the subscription and streaming service, which offers a catalogue of some 35 million tracks.

One has to wonder why anyone in would buy a track if it’s all but destined to wind up available for streaming eventually anyway, but clearly some people do it or Google wouldn’t bother to offer the feature. Also, there are doubtless those who still like to buy tracks and own them — in as much as one can ever truly own digital content — rather than rent them as one effectively does in the case of subscription streaming.

Like any streaming service worth subscribing to, Google Play Music lets users store content offline and users can opt to only update or stream content when connected to Wi-Fi so as to minimise mobile data costs. Though we couldn’t find a setting to choose the specific bitrate at which we’d like to stream when connected to Wi-Fi or when storing tracks offline (for streaming over mobile you can choose between “low”, “normal” and “high” quality), Bennet says the quality tops out at 320kbps.

This, again, is pretty standard on all services except Tidal, which offers uncompressed audio and uses this higher-quality as it’s primary selling point. “In terms of content, it’s not just global repertoire, but also local content,” Bennet says. This local content includes “three of the key acts” at work in South Africa today, namely AKA, Mafikizolo and Cassper Nyovest.

In a quick dig about for local content we also managed to find acts like Desmond and the Tutus, Bye Beneco, Fokofpolisiekar and, umm, even Kurt Darren.

While the service has the vast majority of Taylor Swift’s back catalogue, sadly T Swizzle’s latest release is nowhere to be found. That not exactly a surprise though. Of course, there’s always the option to buy it somewhere and then upload it to the service.

In addition to mobile apps for Android and iOS, Google Play Music is available in-browser or as an app in the Google Chrome Web Store. Open the Chrome app or browser version for the first time and it prompts you to select genres you like, and then individual artists, so that it can begin to create personalised playlists and suggestions. One of the things we liked immediately was the fact that we were able to add myriad artists, unlike Apple Music which only allowed for a handful.

The key categories of the app are “Listen Now”, which offers you quick access to recent additions to your library and recommendations; “Top charts”, which does what it says on the label, albeit without explaining what’s being used to decide on said charts and track’s positions on them; “New releases” and “My Library”, which are pretty self explanatory; and “Browse stations”, which is really a collection of playlists with names like “Today’s Biggest Hits” and “Classic Rock Anthems”. 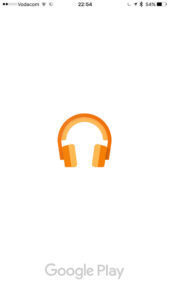 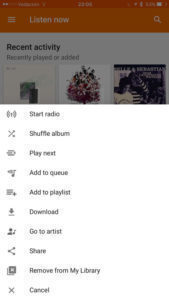 When playing a track, users can opt to give it a thumbs up or thumbs down — which is presumably used to improve future recommendations — can opt to add it to their library or a specific playlist, and can start a radio station based on it. Though different services use different “like” mechanisms, all of that is pretty standard fare.

There’s also the option to share tracks, playlists or stations to social media or via a shareable link. This isn’t as slick as the sharing options on the likes of Spotify or Simfy, where you can share directly with other users, but it’ll do. Also, there’s no feed of what your friends are listening to, and as yet no way we could find to make collaborative playlists, but perhaps those features will follow down the line.

Too big to fail?

It’s too early to say whether or not Google Play Music will be able to win over early adopters who’ve already committed to paying for rival services, but it’s got to be a compelling option for Android users who haven’t yet tried a streaming service, on account of how deeply integrated it is with the Android ecosystem. Also, Google’s brand recognition is some of the strongest on earth, which gives it an immediate leg up over the competition. And with the 30 day free trial there’s simply no reason not to try it.

There’s no mention of Google launching the service in other sub-Saharan markets for now, and no indication as to whether the launch in South Africa means the recently launched YouTube Red service — where US users can pay to remove YouTube adverts, store video offline and get access to exclusive content — will also come to the country. We’re holding thumbs, but not our breath.