Boomerang is the fourth app from the Instagram stable, and the second aimed at capturing things on the move. Hyperlapse, the company’s excellent time-lapse-like app, uses your smart device’s accelerometers to compensate for shake and create astoundingly smooth footage. Instagram’s other app is Layout, a collage creation app. 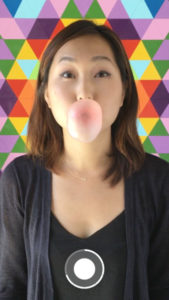 As is Instagram’s way, Boomerang was announced on the company’s blog, along with some suggestions of potential uses for it: “Capture a friend jumping off a diving board, defying physics as she flies back and forth through the air. Transform an ordinary selfie with your friends into a funny video. Get that exact moment your friend blows out his birthday candles, then watch them come back to life again and again.”

Google Photos already automatically stitches related images together into gifs (though they only play forwards) and Apple’s new Live Photos feature produces similar, unidirectional results. Nonetheless, we’re all for Instagram trying new things, even if it means existing apps like Phhhoto — which does pretty much exactly the same thing — are going to suffer for it. That, unfortunately, is the nature of the game.

You can get Boomerang on Apple’s App Store or Google Play.