In May this year, Cell C announced plans to add support for Wi-Fi calling to its network, which lets consumers make or receive calls and send or receive messages using Wi-Fi rather than a cellular connection. Now the operator has announced that AG Mobile’s Style smartphone will be first device on its network to support Wi-Fi calling.

AG Mobile is a South African-based company that sells its own branded smartphones. The company says the Style is capable of Wi-Fi calling because of the inclusion of hardware from chipset supplier MediaTek and software from Lydrasoft. 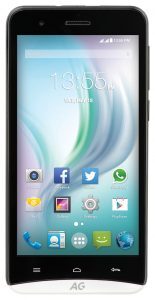 “Our decision to partner with reputable companies such as MediaTek and Lydrasoft not only allows us to tap into their international knowledge and experience but enables us to effectively incorporate cutting edge technology which further enhances our user experience,” says AG Mobile CEO Anthony Goodman.

So, why does Wi-Fi calling matter? It’s important because it means users can continue to use their phone as they normally would when mobile coverage is poor or unavailable but Wi-Fi is available. Not only does this mean fewer dropped calls in large office parks or other structures where Wi-Fi may be excellent but mobile coverage may be dire, but it also means Cell C customers heading to foreign cities with ubiquitous Wi-Fi needn’t bother with international roaming and the substantial fees that tend to accompany it.

We haven’t reviewed AG Mobile’s Style handset yet, but we can tell you its a dual-SIM device powered by version 5.0 (Lollipop) of Google’s Android mobile operating system, includes a quad-core 1.3GHz processor, 1GB of RAM, 8GB of built-in storage, an 8-megapixel rear camera, a 5-inch (854×480 pixel) display and a 1,900mAh battery. The handset comes with a silicon protective cover and a pair of coloured back covers in blue and black.

Cell C’s come in for some criticism in recent years around the quality of its network. The company has invested heavily (at least R4 billion in the 2014/2015 financial years) in infrastructure to combat this, and doubtless hopes Wi-Fi calling will further reduce consumer complaints, but that will only work if it ramps up the number of Wi-Fi calling-enabled handsets it offers and, you know, actually gets them into consumers’ hands and pockets.

In June the operator announced it had renegotiated its roaming agreement with rival Vodacom to include access to Vodacom’s 3G services in an effort to address coverage concerns. The company also continues to aggressively court rival operators’ customers, even going as far as offering to buy customers out of their existing contracts with rivals if they’ll move their business to Cell C. It’s also providing voice, SMS and data services to youth-focused MVNO, Trace Mobile.

Of course, what we’d really like to see from Cell C is cuts to prepaid data, which might prompt its rivals to follow suit in the same way they did (Vodacom almost immediately, and MTN very belatedly) when the operator cut prepaid call rates to 99c/minute and sparked a price war. But we have it on good authority that, contrary to what our mothers told us, we can’t, in fact, have it all.