Jawbone’s wearables have always had one obvious advantage over rivals: they’re better looking. The Jawbone UP3 continues this tradition by looking more like an understated piece of jewellery than an activity tracker. However, as is so often the case where beauty is concerned, this strong showing in the aesthetic department means sacrifices have had to be made elsewhere.

Terribly handsome, but not very bright

The UP3 is essentially the UP2 with an added heart rate monitor, so, like its predecessor, it lacks anything resembling a useful display. While Sony’s SmartBand 2, Fitbit’s Charge HR and Acer’s Liquid Leap (among others) all include a screen, Jawbone’s latest offering can only display three icons: a red one of a walking figure that denotes the device is in tracking mode, a white speech bubble for notifications, and a blue crescent moon for sleep mode. Limiting how much data the band itself can display obviously helps with battery life — the UP3 generally lasted a full week in our tests — but it also means you can’t replace your wristwatch with it or, more importantly, get instant updates on your activity for the day, or your current heart rate or, well, anything beyond whether or not you’ve forgotten to turn off sleep mode (which we did more often than we’d care to admit).

This means diving into the app repeatedly throughout the day if you want to check your progress — an oddly time-consuming process because syncing the band over Bluetooth is inexplicably slow, and one that must undo some of the battery life gained by dispensing with a display on the band itself.

Then there’s the curious problem of the heart rate monitor. Rather than using an optical heart rate monitor like Fitbit’s Charge HR and Surge, or TomTom’s Cardio Runner, which allow for constant monitoring and make it possible to check your heart rate at any given moment, Jawbone’s gone with what it calls “sophisticated bioimpedance sensors” or, as we took to calling them, the “four gold pyramids” on the inside of the strap.

Instead of giving your constant heart rate readings, the UP3 takes one heart rate measurement a day when you wake up. This it considers your “resting heart rate”, which it then tracks over time. This is problematic for a few reasons. 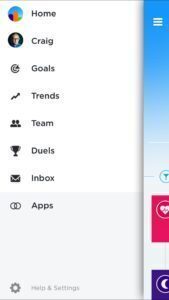 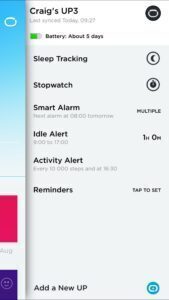 First, it’s unclear whether the measurement is taken when you deactivate sleep mode (which we often forgot to do because we’ve been spoilt with other fitness trackers that track sleep automatically) or around the same time every day, or something else entirely. Second, if the “skin and ambient temperature sensors” also play a role in determining your resting heart rate as the accompanying paperwork suggests, Jawbone does nothing to explain how this works.

Jawbone says live heart rate tracking will come to the UP3 via a firmware update, but we can’t help feeling it should be there to start with. Extrapolating from one measure a day doesn’t exactly inspire confidence. [UPDATE: A recent update to the accompanying app now suggests heart rate monitoring occurs throughout the night and is factored into the resting heart rate calculation.]

Although the UP3’s lack of display means diving into the UP app more often than we’d like, the app itself (available for iOS and Android) is one of the best we’ve seen for any wearable. Intuitive to navigate, easy on the eyes and filled with useful “Smart Coach” suggestions derived from your most recent data and your data over time, the UP app is a an absolute pleasure to use.

On the days we remembered to track our sleep the UP app produced the most comprehensive sleep data we’ve seen on a wearable yet, including deep sleep, REM sleep, light sleep and time awake. When we didn’t remember to turn on sleep mode before turning in, the UP3 would try to guess which hours we slept and prompt us to confirm its suspicions when next we opened the app. This worked well enough if we looked at the app daily, but proved tougher to confirm or deny if a few days had elapsed.

When we went for a run or simply took the stairs to the fourth floor instead of the lift the app would prompt us when next we opened it to classify the sort of activity we were doing. After telling it twice what a run looked like it began automatically recognising future runs. According to Jawbone, the UP3 can “recognise” all manner of activities, from gym workouts to Zumba classes, which certainly adds to its usefulness. 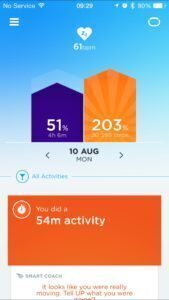 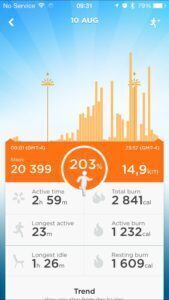 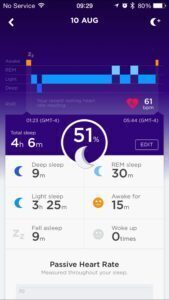 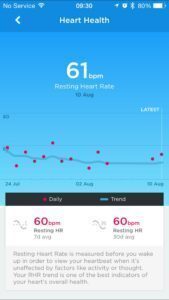 Like rival fitness trackers, the UP3 lets users set daily goals for steps and sleep and allows them to compete against others in one-day, three-day or one-week challenges. It’s also possible to link the UP3 to a huge range of third-party apps, including fitness trackers like RunKeeper, MapMyFitness and Strava, apps for devices like Withings scales or Nest smart home products, and food-tracking apps like Lifesum.

Trust in the trends

Despite having to endure ridicule from friends and strangers alike with our resemblance to some sort of budget bionic man, in the interest of fairness, scientific rigour and to quell our curiosity, we wore the Jawbone UP3 for a full month alongside a Fitbit Charge HR. Both were worn on our non-dominant wrist and only removed for showering and bathing.

What we found was that there was a pretty consistent difference in the steps recorded by the devices, with the Fitbit routinely recording around 20% more steps per day than the Jawbone (see the screenshots above and below for data from both devices captured on the same day).

Now, we’re not saying the Fitbit is necessarily more accurate than the Jawbone — they’re probably both wrong to some degree — and we realise that the important thing with fitness trackers is tracking trends over time — but the Fitbit made us feel we’d achieved more and that hitting our daily goals was actually possible.

On a day we managed 10,000 steps according to the Fitbit, we’d only be at around 8,000 with the Jawbone, even if that day had included a 5km evening run. The result was that the Fitbit made us feel warmer, fuzzier and better about ourselves more often than the Jawbone did. Moreover, because we could check the Fitbit’s readings on the fly, we felt more inclined to trust it than the UP3. 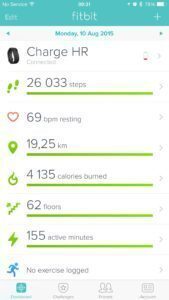 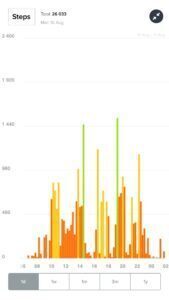 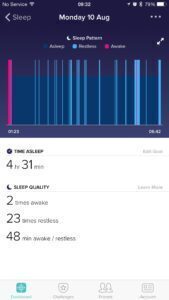 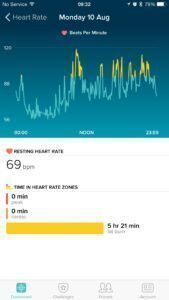 Heart rate data reinforced this sense that the Fitbit data was somehow more accurate, because the Jawbone’s readings fluctuated far more — some days it wouldn’t record data at all, other days it would claim a resting heart rate as low as 53bpm or as high as 68bpm. Further, we could compare the Fitbit’s live heart rate data with that of a TomTom Cardio Runner worn on the opposite wrist, and usually found them to be a beat or two apart at most. Without the ability to get a real-time reading the UP3 leaves the user feeling like there’s a whole lot of guessing going on.

Race to the finish

As pretty as the Jawbone UP3 is, its lack of live data and reliance on the accompanying UP app make it impossible to recommend over rival offerings, particularly given its price of R2,399, which is roughly what the competition’s products retail for.

Future firmware updates may allay some of the doubts we have about the accuracy of the UP3’s data, and may introduce automatic sleep tracking (which really should’ve been there from the start), but won’t be able to fix the lack of display, an omission which makes the device feel crippled from the outset. The UP3 is pretty, but it’s far too pedestrian for its price. If you want a basic fitness tracker and its appearance matters to you the UP2 offers far better value for money.