Samsung’s Unpacked 2015 event takes place a little later this week and we’re already expecting all sorts of things from Samsung, including something a little more mysterious than the usual run of the company’s leaks. But the rumour mill doesn’t stop churning just because a company has a reveal coming up and that’s why we’re hearing news about Samsung’s Galaxy S7 already.

And it might be here sooner than expected. Samsung is reportedly switching up the way that they created devices, with a change from their old ‘Waterfall’ method of device creation to something called ‘Agile’. Agile sees the company splitting development and testing those split-off sections once they’ve been completed – with an emphasis on speed in development. The introduction of Agile could mean that Samsung can alter projects in mid-cycle, as it is more flexible, and it could also speed up development time. The result? We might see the company’s Galaxy S7 as soon as December this year.

Website GforGames have managed to get their hands on some internal documents which claim that Samsung’s Galaxy S7, codenamed Jungfrau according to other recent reports, will arrive packing a Snapdragon 820 from Qualcomm. 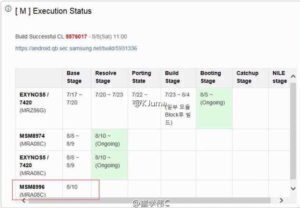 Samsung hopped over to their Exynos processors for the last lot of flagship devices and have done very well out of them so incorporating the Snapdragon 820 seems like it might be a strange choice for them at this point. It is very likely however that we’re seeing a return to Samsung’s old ways with the Galaxy S7, where some phones will have Qualcomm’s hardware and the others will arrive sporting Eynos hardware.