Recently a tweet of the Stuff folks testing LG’s 65UF950T TV drew a lot of attention, because we were… well, we were playing games on an Xbox One, watching movies and generally mucking around with a 65-inch 4K TV. During office hours. And getting paid for it.

And yeah, that’s a really cool part of the job. But you didn’t see us carting the bloody thing upstairs, assemble it like we were MacGuyver stand-ins using nothing but a butter knife and an arc welder made from an old spray can and then get it into position. None of which in any way detracts from the fact that we got to just watch TV for a while and call it work, I’m just saying… it’s not all fun and games. Just most of it. Especially when the accounting department wanders in to see what we’re up to this week. And mostly we were putting this thing together. The LG 65UF950T is a lot heavier than it looks, though once it’s all set up it looks like quite the lightweight. That’d be because all the weight is concentrated at the bottom and most of the panel is as razor-thin as you can make a 65-inch TV these days.

Not that you’ll be admiring its looks if you’re tasked to put the TV together yourself. The gorgeous 64-inch, nearly bezel-less panel slots onto a hefty curved based that consists of the single section, two upright stubs (held in place by two screws each). Once it’s in place (that part’s really a two-man job) then the screen is kept in place by way of two screws per side. Get a long screwdriver, Phillips-head. Your knuckles will thank you.

All The Pretty Colours

Once you’re done and dusted, it’s time to hook up. You’ve got your choice of ports, as long as its HDMI or USB. Just kidding, there is legacy port support but why on Earth would you want it? Why would I say that? You’ll see in a paragraph or four.

The webOS system is extremely easy to use and LG have taken a lot of the thought out of using their TV. It does a lot for you, pre-empting your choices quite often. The menu system is simple to navigate to boot, feeling more like a game console than a clunky old TV interface.

LG’s 65UF950T UHD TV is a beast of a screen, so hopefully you’ve got enough space in your lounge, entertainment room or bar for it. If the room’s too small, you’re going to wind up feeling annoyed at the 4K panel. At the right distances everything looks brilliant, though you’re going to want everything as high-res as possible from now on. At the wrong distance… not so much.

LG’s ColourPrime tech makes everything on-screen look just a touch brighter and shinier. It’s not so noticeable with more natural tones but gaming, with a title like Sleeping Dogs: Definitive Edition‘s garish Hong Kong setting, you can definitely see the difference.

Even then, this screen just isn’t perfect. The edge-lit LED panel might be 4K but I’m afraid that it could be better. Samsung and even LG’s own OLED screens but the 65UF950T to shame when it comes to rendering blacks, though you will pay for that privilege. You won’t be grabbing a 4K OLED between R35,000 and R40,000, which is where you’ll find the 65UF950T (online, anyway). 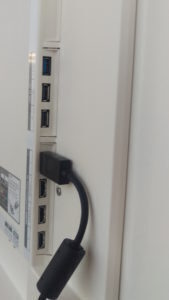 Too Much Of A Good Thing

I haven’t mentioned the remote control yet and I was hoping to avoid it, since I kinda, sorta, forgot to give it back to LG (if you’re reading this, it’s not in the box. Sorry). But I have to mention it because even though it reminds me of the lead villain from Day of the Tentacle, it’s one of the best remotes I’ve ever held. The Magic Remote, as it is called, works equally well as a standard remote or as a Wii-remote-style thingy. Nintendo may have to institute proceedings, actually, they’re that close.

One of the biggest problems that we can see with the LG 65UF950T, aside from the obvious issue of making full use of that gorgeous flat screen due to lack of 4K video and/or the required internet connection needed to stream it, is that you’re never going to watch SD television ever again. Ever. Again.

There are a couple of reasons for that. Part of it is the screen, it looks spectacular with any footage that is HD or better – and you’re going to want it all to be 4K because it’s amazing. But the flip-side is that attempting to watch anything less than 1080p is going to hurt. The 65UF950T is too good at what it does and what it does is make HD look brilliant – usually. There are exceptions even here. Anything less though, even 720p, and you’re looking at every imperfection that you never noticed when viewing your media  on a less well-endowed screen. There’s an analogy there but I’m not going to make it.

LG’s 65UF950T UHD TV is a fantastic buy and don’t let anyone tell you any different. But there’s little point in getting this TV if you’re just going to be watching SABC and eTV on it, it’s HD or nothing. So a satellite signal, PlayStation 4 or one hell of an internet connection for Netflix (this is first-prize) is all but a prerequisite. You will find better screens out there – but expect to double the price if you opt to chase after them.