It’s taken a lot of blood to get to this point. Hopefully not much of it was shed by you but, considering how many game there have been, I kinda doubt it. But there’s more than just blood happening here. Mortal Kombat has been around for a while and it makes sense that the fighters would be getting old. As in old enough to have kids. What, you didn’t consider that would be a possibility?

As odd as it sounds, the Mortal Kombat roster in Mortal Kombat X have gotten around to reproducing (some of them, anyway) and the results make up a fair portion of the new fighter on the list in this brutal kombat title. Johnny Cage and Sonya Blade hooked up and had a kid, Jax had a daughter, Kenshi had a son (who wound up on a stereotypical mission of revenge) and even venerable fighter Kung Lao has a relative running around. So it’s mostly Earth-Realm fighters getting old and settling dow- oh wait. None of them have settled down, they’re out kicking rectum with their kids. They’re just older. And you’ll be getting all the back-story, thanks to MK X‘s story mode. This has been almost obligatory in NetherRealm’s games of late, starting with the last (reboot) Mortal Kombat. The formula for your experience is also as expected; you will venture through a series of chapters, each of which will see players controlling a different character through four or five fights before the story moves on. This time around there’s a bit of time-hopping concerning Shinnok’s attempt to take over Earth-Realm following the defeat of Shao Khan in the previous Mortal Kombat. The story jumps from a couple of years after the fact to about twenty years beyond that, where the older fighters (not counting immortal and/or dead fighters) are still working to maintain the peace between realms. With the young ones doing their part, naturally.

There are no real surprises with the story mode. MK isn’t a series known for its discerning narrative flourishes but they’ve put together a pretty good yarn. If they’d animated absolutely everything, including the fights that players have to complete, and turned in into a once-off 6-part series, I would have watched it without complaints. The voice acting is of a higher standard than expected and the tale itself is… rather enjoyable too. If a bit soaked in blood. 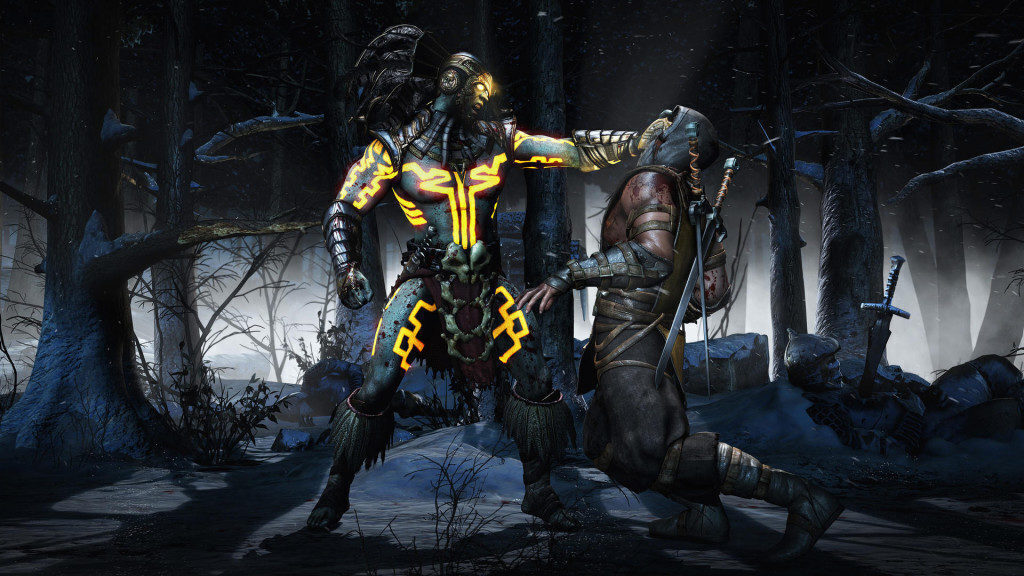 And Mortal Kombat X is bloodier than ever, with new fatalities to marvel over or avert your eyes from, depending on how strong your stomach is. Whether you’re destroying skulls and chests with the X-Ray attacks, which have stuck around, or perfecting your Fatality inputs, there’s enough to make most players recoil at least once when an unexpected dismemberment method is seen on-screen. And that’s what MK has always been about.

Well, that and the fighting. NetherRealm have put together quite a tight ship here and the fighters are finely balanced. Personally I’ve always favoured the older fighters, with Scorpion and Sub-Zero being favourites. Here the Cold Old One moves a bit slower than in the days of MK III but he’s still a nice balance between speed and power. New fighters Takeda and D’Vorah are speedier combatants, Ferra/Tor and Kotal Khan are slower but are able to lay out a lot of damage if you’re unwary and on the receiving end.

Each fighter has their own specific play style that players will want to become accustomed to and there’s no real advantage to any one character (something usually known as ‘pick that one and I’m not playing with you anymore’). It’s one thing to take on the AI, which will trounce the unprepared, it’s another to take your game to a human opponent, off- or online, without knowing every aspect of your chosen warrior. Unusually, it feels like the special attacks and the stage moves, which you should be familiar with by now, are best employed sparingly rather than as a spam tactic. They look good, sure, but you need to get them to connect first. Thought, in a Mortal Kombat game? That… actually works. Players are not confined to the story, versus and online modes. There’s also the traditional Tower challenges, with a series of modifiers to keep things interesting. Players can use Koins awarding during play – no matter where you’re playing, Koins will be coming in – to venture to the Krypt where unlockables and a few surprises await.

But there’s an overarching game to be played as well. Once you’re online (and that required a 3GB+ patch on the PlayStation 4 first), you’ll be prompted to join a Faction. These are the Lin Kuei, White Lotus, Black Dragon, SF and Brotherhood of Shadow. Once you’ve made your selection, you’re technically helping them just by playing the game. But you can actively participate if you like. During review, an Invasion event took place. This saw the Realm of Order attempting to ‘invade’ and the various factions vying for the top spot to repel this invasion. You do so by taking on Assassins or Boss characters (don’t expect to beat the Boss), defeating unique towers and generally fighting for your team. The team with the most points at the end of an event… well, they get something nice. Of course, you can change factions if you like. Traitor. If Mortal Kombat X had been the reboot title, I’d have given it a higher rating. As it is, this is perhaps the best MK I’ve played to date in terms of combat (or kombat), and it gets points for having a pretty darn engaging storyline in the single-player too. But the things that make this all possible are actually fairly minor and, aside from the new characters, there’s nothing really innovative to see. Which is to be expected. At this point you can only really refine the Mortal Kombat series. It’s good. Extremely good. But you’ll need to be extremely dedicated to see exactly why that is the case.